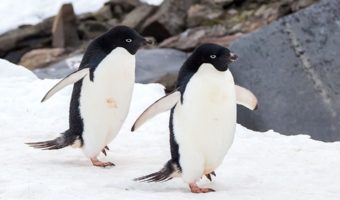 Adelie penguins nest and breed on the rocky, ice-free beaches in large colonies of ten thousands of birds. There are over 2.5 million breeding pairs living in the Antarctica region.

Adelie penguins are 60 to 70 centimetres long and around 4 kilograms in weight.

Distinctive marks are the white ring surrounding the eye and the feathers at the base of the bill.

These long feathers hide most of their red bill. Their tails are a little bit longer than other penguins tails.

Adelie penguins are highly dependant on crustaceans, such as krill. Fish and amphipods can also be common foods in certain locations during certain seasons.

In December, the warmest month in Antarctica (about -2°C), the parents alternate periods of incubating the egg. One parent goes to feed and the other stays to warm the egg. The parent who is incubating does not eat. In March, the adults and their young return to the sea. Adelie penguins have to defend their nests from other penguins who try to steal pebbles, stones, and other nest building materials. Adelie penguins do not drink water but instead, they eat snow. They have a gland in their nose that takes the salt out of the ocean water that they swallow when catching fish and eating fish while in the water.

Adelie Penguins are migratory penguins and after breeding, they do not return to their colonies until the next spring. Little is know about the non-breeding distribution of this species. There are only a few records of Adelie Penguins during the Antarctic winter.

Recent work using satellite telemetry indicates that Adelie Penguins from the Ross Sea leave this area in autumn and migrate about 600 kilometres north of the Antarctic continent. Juveniles are suspected to travel even further north than adults.