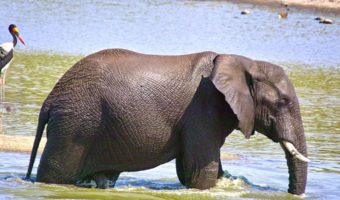 The largest African elephants recorded weight was over 9 tons and it stood more than 12 feet high at the shoulder. The African elephants average weight is up to 7 tons, about the equivalent of 78 adult human males weighing an average of 90 kilograms each.

Here are some facts about the anatomy of an African Elephant:

The African Bush Elephant is an intelligent animal. Experiments with reasoning and learning show that they are the smartest ungulates together with their Asian cousins. This is mostly due to their large brain.

In most places, the adult African Bush Elephant lacks natural predators thanks to its great size, however, the calves (especially the newborn) are vulnerable to lions and crocodile attacks and (rarely) to leopard and hyena attacks.

While the African elephant is classed as vulnerable, conditions vary somewhat by region within eastern and southern Africa.

In 2006, an elephant slaughter was documented in southeastern Chad by aerial surveys. A series of poaching incidents, resulting in the killing of over 100 elephants, was carried out during the late spring and summer of 2006 in the vicinity of Zakouma National Park. This region has a decades-old history of poaching of elephants, as one of Africa’s big five game, which has caused the elephant population of the region, which exceeded 300,000 in 1970, to drop to approximately 10,000 today. The African elephant officially is protected by Chadian government, but the resources and manpower provided by the government (with some European Union assistance) have proven insufficient to stop the poaching.

Human encroachment into or adjacent to natural areas where bush elephants occur has led to recent research into methods of safely driving groups of elephants away from humans, including the discovery that playback of the recorded sounds of angry honey bees are remarkably effective at prompting elephants to flee an area.