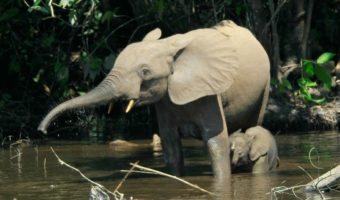 They are typically considered to be different populations of a single species.

The North African elephants known as the ‘war elephants of Hannibal’, were possibly a now-extinct fourth species or a subspecies of the Forest Elephant.

The disputed Pygmy Elephants (Loxodonta pumilio) of the Congo basin are often assumed to be another separate species by cryptozoologists (one who studies for animals which fall outside of contemporary zoological catalogs) but are probably Forest Elephants whose small size and/or early maturity is due to environmental conditions.

African Forest elephants survive on a diet of herbs and trees or shrubbery leaves and large amounts of water.

A male African Forest elephant touches a female to see if she is ready to mate. An elephants gestation (pregnancy) period lasts about 22 months (630 – 660 days), the longest gestation period of any mammal, after which one calf is typically born. An orphaned calf will usually be adopted by one of the familys lactating females or suckled by various females.

African Forest Elephants live in close social groups called ‘herds’. A herd is usually made up of related females and their offspring. The leader of the herd is called the ‘matriarch’ and she is usually the oldest and most experienced female elephant in the herd.

It has been discovered that elephants can communicate over long distances by sending and receiving low frequency sounds, a sub-sonic rumbling that can travel through the ground farther than sound travels in the air. This sound is felt by the sensitive skin of an elephants feet and trunk, which pick up the vibrations through the ground.

December 2000 formed the environmental ministers in Cameroon, Central african Republic and Congo, a united migration corridor for the elephants, where they can walk back and forth over the borders between the countries.