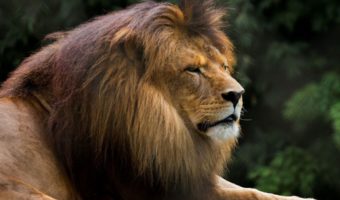 The African Lion has a light tawny coat with white on the abdomen and inside of their legs. The backs of an African lions ears are black in color. The male lions mane ranges in color from tawny to reddish brown to black. The mane gets darker as the male lion ages. The mane provides protection from an opponents teeth and claws during conflict.

Since the early 1950’s, the lion population in Africa has been reduced by half. Today fewer than 21,000 lions remain in all of Africa. The Lion is considered to be one of Africa’s big five game and were often considered trophies by hunters.

The lion is found throughout the south Sahara desert and in parts of southern and eastern Africa.

Lions hunt by ambush. A lions main prey includes medium to large-sized mammals such as antelope, buffalo, zebra, giraffe, warthog and deer, however, they will also scavenge for food. Lions can survive for long periods without water, obtaining moisture from prey and plants.

One of the few animals that will attack lions are hyenas, which will kill an injured lion, or if food is scarce, will occasionally attack a healthy one. Lions and hyenas have also been known to kill each other in fights over prey.

African lions are listed as Vulnerable by the 2000 IUCN red list.

The African Lion is the most popular national animal and is shared by 11 different countries: