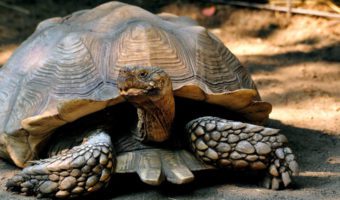 The African Spurred Tortoise (Geochelone sulcata) is also known as the Sulcata Tortoise, ‘Grooved Tortoise’, the ‘Spur Tortoise’ and the ‘African Spur Thigh Tortoise’. It is a desert-dwelling tortoise whose range extends along the southern edge of the Sahara Desert from Senegal and Mauritania, east through Mali, Chad, the Sudan and Ethiopia to Eritrea. The African Spurred Tortoise is the third largest tortoise in the world and the largest of all mainland species of tortoise. It is native to the southern edge of the Sahara Desert and the Sahel, but is becoming more common as a pet throughout the United States.

Unfortunately, although they make good pets and are gaining popularity, the numbers of these desert tortoises in the wild are falling.

The African Spurred tortoise’s scientific name is Centrochelys sulcata or Geochelone sulcata. The name “Sulcata” is from the Latin sulcatus, which means furrowed and refers to the patterns on the animal’s shell. The tortoise is also known as the Spur Thigh Tortoise. The Sulcata tortoise is the only species in its genus. 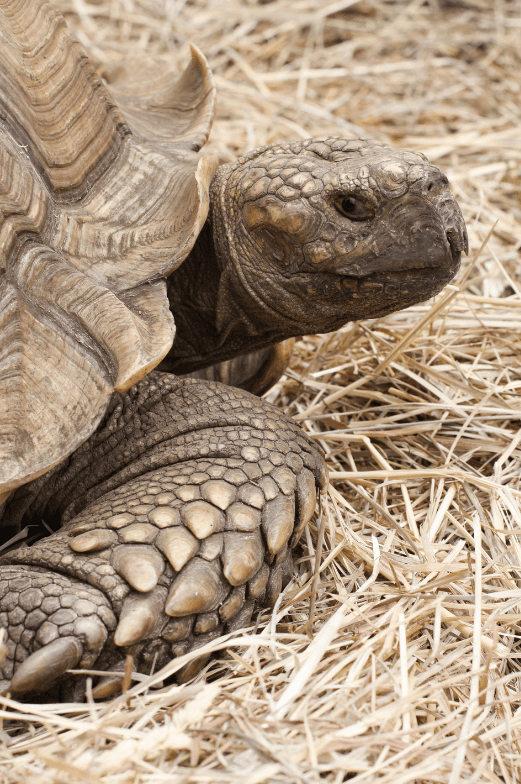 Characteristics Of The African Spurred Tortoise

Sulcatas are very large tortoises! The only two tortoises larger than the Sulcata are the Galapagos tortoise and the Aldabra giant tortoise. These animals usually weigh between 79.3 and 110.13 pounds, but a full grown male can weigh anywhere up to 200 pounds. The Sulcata is usually between 24 to 30 inches (61 to 76 centimeters) long.

Sulcatas have a proportional head and thick, scaly skin that’s yellowish-brown or golden in color. Their legs are stubby for digging and their back legs have spurs, which give the tortoise its other name of African spurred tortoise. However, it is unknown what the spurs are for.

There is no little morphological difference between males and female Sulcatas. Males are generally larger but both sexes are extremely strong. There is no difference in their tail size or shape between the two sexes.

Sulcata tortoises have a very long lifespan and can live for more than fifty years! This is one of the main issues with keeping these animals as pets — often they can outlive even young owners.

The Sulcata is a herbivore and eats grasses, weeds and succulents. The tortoise’s diet is low in protein and high in fiber. Sulcatas will search for food during the cooler parts of the day. They have a slow metabolism and can go weeks without eating or drinking. However, when they do come across a source of water, they can drink as much as 15% of their body weight in one go!

Both male and female Sulcatas can be very aggressive and ramming often occurs. Males are more likely to ram other males. They can also try to flip each other over, although, unless there is a big size difference between the two Sulcatas, they will most likely not be successful. If a Sulcata is flipped over, they can quickly die of hyperthermia. This is because it is very difficult for a flipped-over tortoise to right itself.

Sulcatas are crepuscular. This means they are out at dawn or dusk and spend time basking in the morning sun to regulate their body heat.

Adult Sulcatas can reproduce throughout the year but usually mate between September and late November, just after the rainy season. Males will fight with each other for breeding rights with females, often ramming each other and flipping each other over.

Around 60 days after mating, a female Sulcata will begin to look for the right nesting site. This could take up to two weeks. Once she has settled on a place, she will dig a hole in loose soil around 2 feet across and 3 to 6 inches deep. She does this with her front feet, and then uses her back feet to dig another hole at the back of the first hole. This whole process can take up to five hours depending on how soft the soil is!

Once the nest is ready, the female will lay eggs at a rate of one about every 3 minutes until she laid between 15 and 30 eggs. She then spends about an hour filling in her nest, covering all the eggs.

Tortoises and other reptiles don’t exactly “raise young” and, once the eggs have been laid, parental involvement stops there. The eggs hatch after about 8 months. The baby tortoises are usually around 2 to 3 inches long at birth, but grow quickly and can be 6 to 10 inches long after a few years. They are golden or tan in color, and their carapaces are oval and serrated. The sex of a hatchling is most likely determined by the temperature it was exposed to in the egg and not by chromosomes.

Baby sulcatas are normally aggressive from the start and very active. It is not uncommon for hatchlings to ram each other and try to flip each other over.

Sulcatas do not reach sexual maturity until they are 15 years old, which is one of the reasons why their numbers are declining. 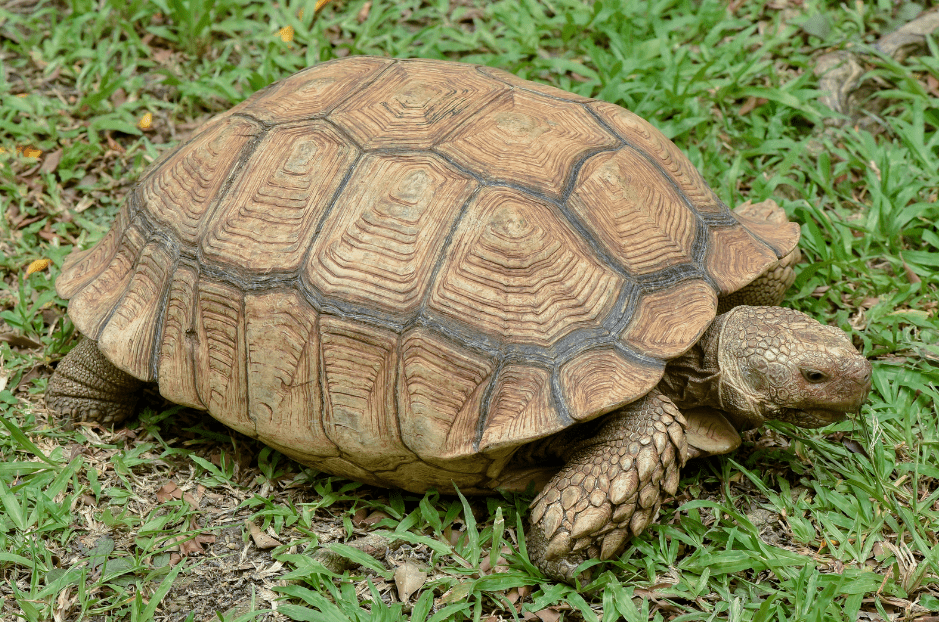 These tortoises live in countries that are at least partly located in the Sahara desert, such as Ethiopia, Mali, Sudan, Mauritania. This means they are located in places that are very hot and dry, and are adapted to survive.

Sulcatas dig burrows in the ground which allow them to escape from the very hot climate that they live in. These burrows are usually 30 inches in depth, but some Sulcatas will dig tunnel systems 10 feet or more in length! They will flip mud onto their backs if they are too hot, or, if there is no mud because the temperature is too hot, they will cover their legs with their own saliva to cool down.

A burrow not only protects a Sulcata from the arid environment, but also provides them with enough moisture. Sulcatas are designed to retain moisture so they do not dehydrate in their hot climate. They regulate their urine output and their skin is highly permeable when they are exposed to moisture. It is thought that they get all the moisture they need from their food, and so not need to seek out other water sources. This is confirmed by Sulcatas living in zoos — it has been noted by zookeepers that a Sulcata seems to show very little interest in water even when it is on offer, so they must get the moisture they need from their plants.

While Sulcatas can tolerate some surprisingly low body temperatures, they will actively seek refuge when it gets cold outside. This is interesting, because most tropical tortoises would not do this and freeze when it got cold.

Sulcatas are listed as vulnerable by the International Union for Conservation of Nature (IUCN). This is most likely due to habitat loss and the increase in popularity of the Sulcata as a pet. Desertification is also a problem when it comes to Sulcata populations because, although they live in an arid area, an area that is too dry will not contain enough food for them to eat.

There are very few natural predators of Sulcata tortoises. This is because they are able to withdraw into their shells to escape from anything that might eat them. In fact, Sulcatas are more at risk from their habitat and humans than other animals. Humans hunt and eat the Sulcata tortoise, too.

Some cultures in Africa believe the Sulcata tortoise is an intermediary between the people and their ancestors and gods.

The African Spurred Tortoise is known to get excited and run around just before it rains.Female african spurred tortoises can raise their shell up off the ground and then drop it with a thud.In Senegal, the African spurred tortoise is a symbol of virtue, happiness, fertility and longevity and, as such, conservation programs have been easier to promote in this country.