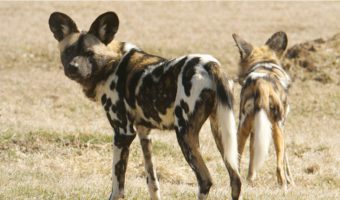 The African Wild Dog has an uniquely patterned coat. The irregular pattern is colored with white, yellow, brown and black markings. Each pattern is unique to each individual, just like a Giraffes pattern and a humans fingerprints are individually unique. African Wild Dogs have slim, lean bodies and long, slender legs. They have large, rounded distinctive ears and a long tail which has a white plume at the end.

Their muzzles are black and they have a black line which extends down their forehead. African Wild Dogs measure around 1.5 metres (5 feet) in length which includes its head and a tail length of around 30 – 40 centimetres. It stands around 75 centimetres at the shoulder and weighs 37 – 80 pounds.

East and West African dogs tend to be smaller than those in South Africa. Males are usually larger than females in all regions. African Wild Dogs differ from other members of the canidae family in that they only have four toes on each paw instead of five as they lack dew claws (which is the fifth digit on other canids). African Wild Dogs have around 42 teeth including premolars that are much larger than in other canids allowing it to consume large amounts of bone.

The African Wild Dogs preferred habitats are open woodlands, grasslands and savannas. Dogs in the southern regions inhabit the open savannas of the sahara desert.

African Wild Dogs are strict carnivores. They prey upon a variety of grazing animals particularly medium sized ungulates such as Zebras, Antelopes, Impalas, Gazelles and Springboks. Most of their diet is mammal prey, however, they do sometimes hunt large birds such as ostriches. Larger packs may hunt larger animals such as wildebeests.

Warthogs are also hunted, however, care has to be taken not be inflicted with a potentially lethal wound by the warthogs sharp tusks although safety in numbers is usually the resolve. Wild dogs rarely consume carrion and will not return to an earlier kill.

African Wild Dogs live together in packs containing between 10 – 20 individuals. Home ranges vary in size and depend on the availability of prey but can be more than 1000 square kilometres (620 square miles). Packs often contain more males than females. Most members of the pack are related to each other in some way. Packs will contain an alpha male and female who are the main breeding pairs.

Males and females each have their own hierarchies with the oldest female being the dominant individual and in contrast, the youngest male taking charge of the males. Wild dogs are very sociable animals and have a submissive based hierarchy rather than a dominant one. Dominance is established without any fighting or blood-shed. Even over food, an individual will energetically beg rather than get into conflict. This non-aggressive approach is emphasised perhaps because if any injuries occur, the pack will be short of hunters and unable to provide as much for its members.

African Wild Dog packs have intense social bonds and these bonds are a great advantage during hunts. They are extremely co-operative as a hunting pack when running down and over-powering prey in long distance chases. Hunts are not strategically cunning at all. In the early, cool mornings and late afternoons the Wild Dogs will approach their prey in full view. Surprise attacks are unnecessary as African Wild Dogs have the stamina to chase prey until it is exhausted.

The Wild Dogs top speed is 60 kilometres per hour (37 miles per hour) and prey will most often be able to gallop so what faster. However, prey will eventually be chased down over distances of 6 kilometres (3.5 miles). Typical hunts are seen more as an endurance chase. During these long distance chases, Wild Dogs will spread out to prevent prey from any sideways escape attempts. The preys zig-zagging evasive movements which would normally confuse a lone hunter such as a Cheetah, are ineffective against the pack of wild dogs.

The hunting pack keep in touch constantly throughout the hunt by producing high pitched yapping contact calls. As the exhausted prey eventually slows down, the dogs surround it targeting their softer underparts and killing their victim. Wild Dog hunts have a high success rate with 3 out of 4 hunts resulting in a kill. While a whole herd of ungulates may be targeted, the eventual victim will be the one who falls behind due to age or sickness.

African Wild Dogs have a very powerful bite and their large molars and premolars allow them to easily crush the bones of their catch. When the dogs have eaten their prey, they return to the pack and regurgitate the food to pups, older dogs and to members that where not part of the hunt.

There is no particular breeding season for the African Wild Dog although mating can increase through the latter part of the rainy season around March and June. After a gestation period of around 70 days, the female gives birth to a litter of around 10 pups (few usually survive because of predators).

Pups are born in an underground den or another animals abandoned den (usually an Aardvark). Pups are weaned at 10 weeks and when they reach 3 months, they leave the den to begin running with the pack. They are able to kill small prey at 11 months and can fend for themselves at around 14 months. Pups are able to breed when they reach sexual maturity at between 12 – 18 months.

Male wild dogs continue to stay with their birth pack, however, females may leave and join other packs that lack sexually mature females. This behaviour is quite unusual as it is the opposite way round with most other social animals. Other unusual traits of the wild dogs is that the females will compete for access to the males and males are often left to rear the pups while the female joins the hunting pack.

The average lifespan of a wild dog is 10 years.

African Wild Dogs are an endangered species. Once there were around 500,000, now there are only 2,000 – 5,000 in existence today mostly living in national parks or preserves.

Major threats to wild dogs are hunting and habitat loss. Competition with larger carnivores such as lions and spotted hyenas is also a problem for the wild dog as they both pursue the same type of prey. Lions will kill as many wild dogs as it can, but it does not eat them. Wild dogs are also killed by farmers who want to protect their livestock and disease can spread from domestic animals. These problems have all contributed to the small size of wild dog populations.