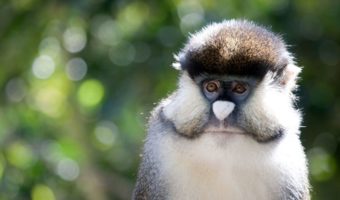 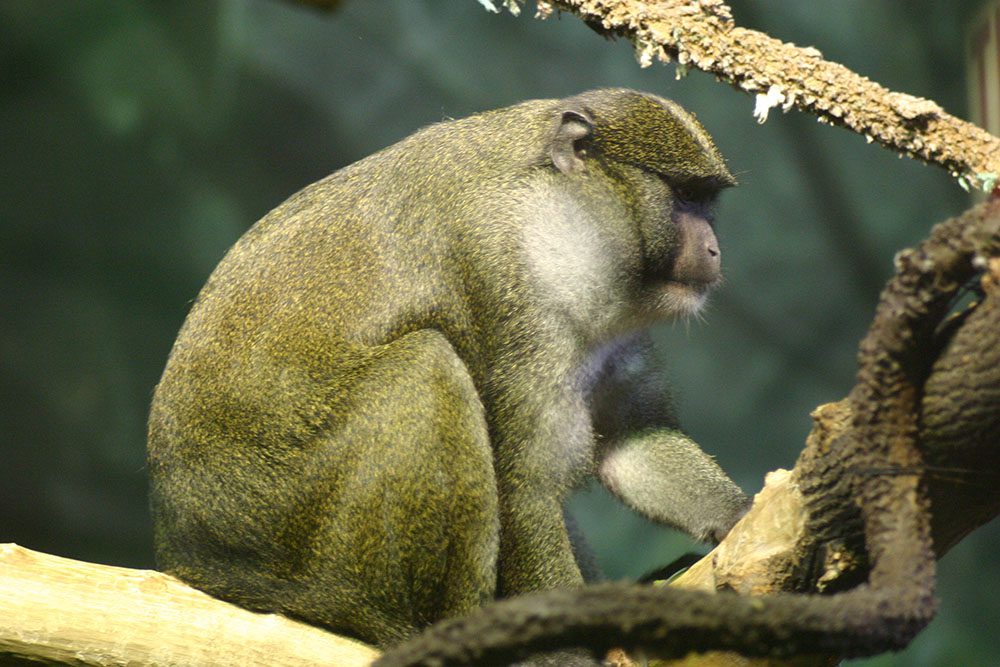 The average group size is around 40 individuals. These large groups are divided into sub-groups of 2 – 6 individuals who together forage for food. The groups sleeping sites are usually located near water, the sleeping sites become regular spots and repeatedly used. The Allens swamp monkey has a multimale-multifemale social system.

Allen’s Swamp monkey makes a grunting sound that is used to maintain contact between members of the group. Individuals will groom each other to remove dead skin and parasites. This kind of behaviour reinforces bonds between two individuals.

The Allen’s Swamp monkey inhabits swampy, water-rich areas. They are very good swimmers and can dive well. When threatened, they can quickly dive into the waters to avoid danger.

Allen’s Swamp Monkey is a diurnal animal (active during the day and sleeping at night) and regularly looks for food on the ground. Allen’s Swamp Monkeys diet consists of fruits and leaves as well as beetles and worms and other small invertebrates. They also consume vertebrates including fish hatchlings that are collected from river beds during the dry season.

Allen’s Swamp Monkeys life span can be as long as 23 years. They tend to live longer in captivity than in the wild.

Little is known about the mating habits of the Allen’s Swamp monkey. What is known is that the females give birth to one single offspring, which is weaned in 3 months and is mature after 3 to 5 years. Most births within this species occur in June.

Raptors, snakes and the Bonobo rank among the natural enemies of Allen’s Swamp Monkey. Unlike other primates, its swampy habitat is not so strongly exposed to the danger of the forests. However it is hunted for its meat by man. The IUCN lists Allen’s Swamp Monkey is near threatened due to hunting and habitat destruction.

Talapoin monkeys are the two species of Old World monkeys classified in genus Miopithecus. Talapoin Monkeys live in central Africa and their range extends from Cameroon and the Democratic Republic of the Congo to Angola.

It has been customary to recognize only a single species in the genus Miopithecus talapoin the Angolan Talapoin, however, the population in Cameroon (south of the River Sanaga), Rio Muni and Gabon can be distinguished as a separate species, Miopithecus ogouensis the Gabon Talapoin.

Talapoin Monkeys are the smallest Old World monkeys and almost certainly evolved from a larger-bodied ancestor by dwarfing. Their fur is coarsely banded yellow-and-black dorsally and white or greyish white ventrally.

Their head is round and short-snouted with a hairless face. Their nose is black and the skin bordering the face is also black. In males, the scrotum is colored pink medially and blue laterally.

Talapoin Monkeys are both diurnal and predominantly arboreal, although they may occasionally descend to the ground while foraging. Talapoin Monkeys are good swimmers and commonly sleep on branches overhanging rivers so that they can dive to escape from predators.

Talapoin Monkeys live in large groups of 60 to 100 animals. They congregate at night in trees close to the water, dividing into smaller sub-groups during the day in order to spread out to find food. Groups are composed of several fully mature males, numerous females and their offspring. Unlike the closely related Guenons, Talapoin Monkeys do not have any territorial behaviours.

Talapoin Monkeys like to play and this mostly takes place between juveniles, however, adults also engage in play. Talapoin Monkeys have two types of play – wrestling which includes grabbing and grappling and sometimes includes playface and running which includes fast chasing of one individual by another. Male Talapoins tend to engage in social play more often than female Talapoins.

Talapoin Monkeys verbal repertoire is rather smaller although when an individual attacks, it will look at it and give ‘pant chirps’ to other individuals that it is not attacking and they respond by joining in on the attack.

As in all primates, communication in this species is likely to be complex. Both vocalizations and visual signals (such as body posture and facial expressions) are used by primates to communicate with con-specifics. In addition, tactile communication may play some role in maintaining social bonds, as in the form of grooming. Some primates use chemical communication, especially in reproductive contexts.

The highest recorded age of a Talapoin Monkey in captivity is 28 years, while the life expectancy in the wild is not well-known, however, is likely to be lower than that seen in captivity. A female Talapoin Monkeys 160 day gestation period (typically from November to March) results in the birth of a single young.

Offspring are considerably large and well developed (newborns weigh over 200 grams and are about a quarter of the weight of the mother) and develop rapidly. Within 6 weeks they eat solid food and are independent at 3 months of age.

They also act as important prey animals for medium to large predators. Talapoin Monkeys are not currently regarded as threatened. They are occasionally hunted as a source of bush meat, although their small body size makes this relatively unprofitable. 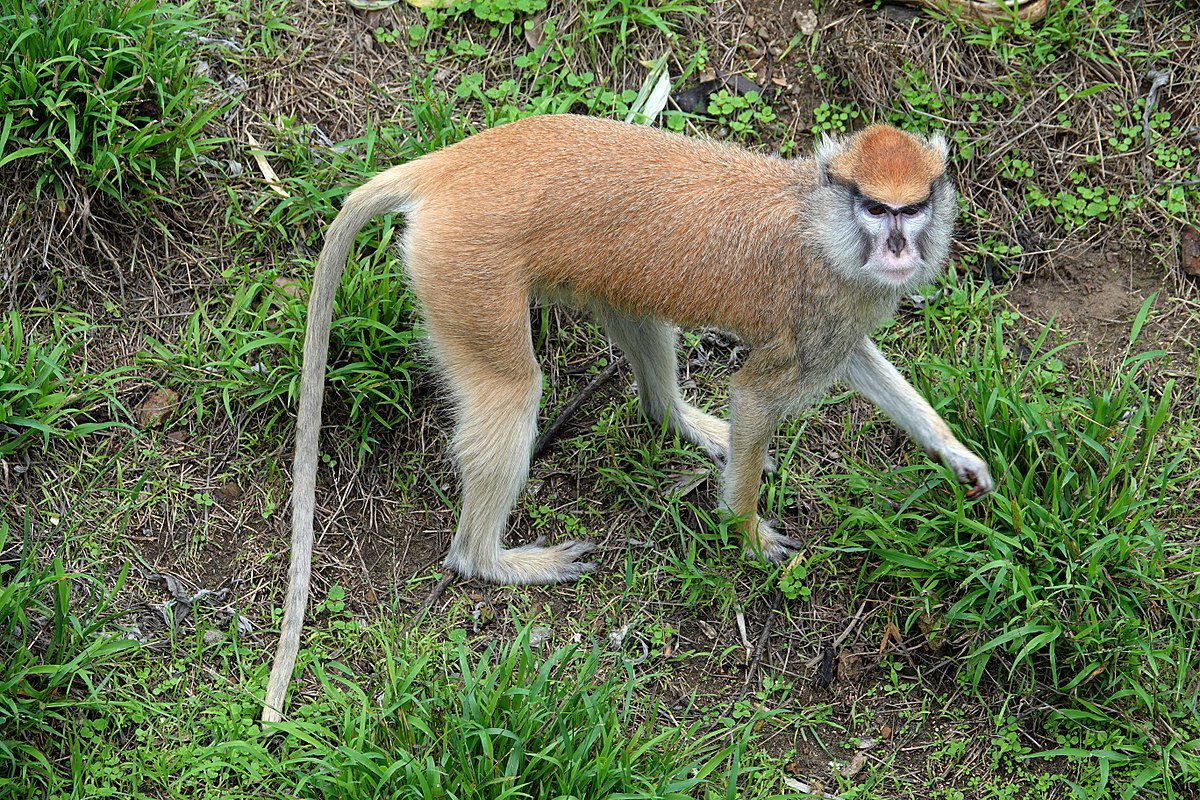 The Patas Monkey (Erythrocebus patas) is a ground-dwelling monkey distributed over West Africa.

The Patas Monkey are found in the following countries:

The Nisnas has a white nose and the Common Patas monkey has a black nose. Patas Monkeys are the worlds fastest terrestrial primates. A male patas monkey is capable of running at least 35 miles per hour. In the wild, Patas Monkeys spend more time on the ground than any other monkey.

The body plan of a patas monkey bears a remarkable resemblance to that of a greyhound dog. It has the same long legs, narrow body and prominent rib cage. Its long legs give it a tremendous loping stride when running. Because of their speed, coloring and gait, Patas monkeys have often been mistaken for cheetahs while running.

Patas monkeys are reddish tan in color with very expressive, whiskered faces. The whiskers sit on a grey chin and they have white ‘military like’ moustaches. Patas monkeys grow to be 85 centimetres in length, excluding the tail, which measures 75 centimetres and weigh on average 18 pounds when fully grown. Like all Old World monkeys, they have well-developed hands with an opposable thumb. The Patas monkey is also known as ‘Dancing monkey’, ‘Hussar monkey’, ‘Military monkey’, ‘Red monkey’ and ‘Sergeant-major monkey’. Male Patas monkeys have proportionally the longest canines of any primate.

A Patas monkey troop generally has only one adult male monkey and 4 to 10 female monkeys. Other Patas males either live alone or in bachelor groups. The highest-ranking female is in charge of the troop, not the male.

The male Patas monkey spends much of his time perched high in trees or rock outcroppings, on the lookout for predators and other dangers. Males that live in the bachelor groups will occasionally approach a troop of females and set about their single male monkey in an attempt to drive him away and take his place. Such incidents are quite frequent and biologically desirable in that they prevent inbreeding.

When relaxed, Patas monkeys lean back and put their feet up. Although generally quiet, Patas monkeys will bark upon meeting another troop. Patas monkeys avoid woodlands and live in treeless savanna and semi-deserts. They range from Senegal to Ethiopia and south to Tanzania. Patas monkeys are omnivores but are especially dependent on the pods, seeds, gall, young leaves, gum and flowers of acadia trees.

They also eat grasses, berries, seeds, fruits, insects, eggs, lizards, tubers and young birds. The Patas monkey can store as much food in its cheeks as it can fit into its stomach.

Primary predators of Patas monkeys include leopards, cheetahs, eagles, hyenas and jackals. If a predator approaches, the ever-watchful male Patas monkeys create a diversionary display. Bouncing noisily on bushes or trees, he draws attention to himself and away from the females and young. This gives the rest of the troop time to silently flee or to hide in the long grass. Additionally, the coloration of Patas enables them to use their savanna surroundings as camouflage.

Patas monkeys are not listed as an endangered or threatened species although habitat destruction and heavy cattle grazing and the conversion of savanna areas into farmland have reduced available habitat for Patas monkeys.

However, in some instances, deforestation has converted once humid areas into drier savanna zones. In turn, this actually increases suitable habitat for Patas monkeys.