You are here: Home / Animals / Alligator 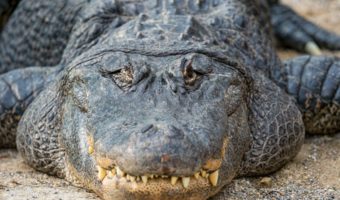 An Alligator is a crocodilian in the genus ‘Alligator’ of the family ‘Alligatoridae’. Alligators are large, semi-aquatic carnivorous reptiles with four small legs and a very large, long tail. The tail is half the animals total length. Alligators tails help propel them rapidly through the water and is used to make pools of water during the dry seasons called ‘gator holes’.

The tail is also used as a weapon and stores fat that the alligator will use for nourishment during the winter. Alligators are cold blooded (ectothermic) and like most reptiles they do not make their own body heat. Alligators gain body heat by basking in the sun moving between hot and cool locations.

Alligators, like many reptiles are ‘plantigrade’. This means that they walk in a flat-footed manner. On land, they can run and move very fast, but only in short bursts.

There are two living alligator species:

The American Alligator (Alligator mississippiensis) found only in the southeastern part of the USA – Gulf of Mexico, Texas, Oklahoma, Louisiana, Mississippi, Alabama and Florida as well as Arkansas, Georgia and the Carolinas. The majority of American Alligators inhabit Florida and Louisiana. In Florida alone there are an estimated more than one million alligators. The United States is the only nation on earth where both alligators and crocodiles live side by side. American Alligators live in freshwater environments, such as ponds, marshes, wetlands, rivers and swamps.

An average American Alligators weight is 800 pounds and their length is around 13 feet long. The largest alligator recorded in Florida was 17 feet 5 inches long (5.3 metres). The largest alligator ever recorded in the world measured 19 feet 2 inches (5.8 metres) and was found on Marsh Island, Louisiana. Few of the giant specimens were weighed, but the larger ones could have exceeded a ton in weight. The Chinese Alligator is smaller, rarely exceeding 7 feet (2 metres) in length.

The Chinese Alligator (Alligator sinensis) is an endangered species and is found in the lower Yangtze River basin in China. Alligators mostly live in fresh to brackish water, in swamps, marshes, canals and lakes. There is estimated to be only around 24 Chinese Alligators left in the wild. There are many more of these alligators in zoos around the world than in the wild.

Alligators are sometimes confused with Crocodiles as they are similar in shape, features and behaviour. However, they can be distinguished by the following difference:

Alligators have a ‘U’ shaped, shorter snout. Their upper jaw is wider than the lower jaw, overlapping it.

Their lower teeth are mostly hidden when their mouth is closed and fit into sockets in the upper jaw.

Their salt glands are non-functional and their sensory pits are located only near their jaws.

Crocodiles have a ‘V’ shaped, longer snout. Their upper jaw is about the same size as lower jaw and their lower teeth are displayed outside the upper jaw when the mouth is closed (especially noticeable is the huge fourth tooth).

Their upper teeth display outside the lower jaw. Their salt glands are located on their tongues and excrete excess salt. Their sensory pits are located over most of its entire body.

Both living species of Alligator also tend to be darker in color than the Crocodile, often nearly black. However, color is very dependent on the water. Algae-laden waters produce greener Alligators whereas Alligators from waters with a lot of tannic acid from overhanging trees are often darker (although the Chinese alligator has some light patterning).

The eyes of a large Alligator will glow red and those of a smaller one will glow green when a light is shined on them. This fact can be used to find alligators in the dark.

Large male Alligators are solitary, territorial reptiles. Smaller Alligators can often be found in large numbers in close proximity to each other. The largest of the species (both males and females), will defend prime territory whereas smaller Alligators have a higher tolerance of other Alligators within a similar size class.

Although Alligators have heavy bodies and slow metabolisms, they are capable of short bursts of speed that can exceed 30 miles per hour, though this could more properly be classified as a short fast lunge rather than a dash. Alligators main prey are smaller animals that they can kill and eat with a single bite. Alligators may kill larger prey by grabbing it and dragging it in the water to drown.

Alligators consume food that cannot be eaten in one bite by allowing it to rot or by biting and then spinning or convulsing wildly until bite-size pieces are torn off. This is referred to as the ‘death roll’. Most of the muscle in an alligators jaw is intended for biting and gripping prey. The muscles for opening their jaws are relatively weak. As a result an adult man can hold an alligators jaw shut with his bare hands.

Alligators are nocturnal and feed primarily at night. Younger alligators eat insects, shrimps, snails, small fish, tadpoles and frogs. Adult alligators eat fish, birds, turtles, other reptiles and mammals. Alligators swallow their prey whole. Their conical teeth are used for catching the prey, not tearing it apart. Alligators have about 80 teeth and when an alligator loses a tooth, it regrows.

Alligators do not sit on their eggs, which are laid in nests, because it would crush them. The rotting vegetation in the nest warms the eggs. The temperature of the nest determines the sex of the hatchlings. If the eggs are incubated over 93 degrees Fahrenheit (34 degrees Celsius), the embryo develops as a male; temperatures below 86 degrees Fahrenheit (30 degrees Celsius) result in female embryos. Between these temperatures, both sexes are produced. The natural sex ratio at hatching is five females to one male. The eggs hatch in two months, producing hatchlings about 6 inches long (15 centimetres). The female defends the nest from predators. A group of babies is called a ‘pod’. The female alligator will provide protection for the young for about a year if they remain in the area. Alligators are among the most nurturing of the reptiles.

The average life span of an Alligator is around 35 – 50 years old, although it is said they can live to a maximum of 80 years old. This is more possible of Alligators living in captivity.

Crocodyloformes (the group encompassing crocodylians and other similar but extinct reptiles) evolved during the Triassic Period, about 248 million years ago. Crocodylians (a group which includes alligators, crocodiles, gharials or gavials, caiman) appeared during the Cretaceous period, about 98 million years ago, towards the end of the Mesozoic Era, the Age of Reptiles.

Deinosuchus (meaning ‘terrible crocodile’) was the largest crocodylian, growing up to 50 feet (15 metres) long. It lived during the late Cretaceous period (about 146 to 65 million years ago). This carnivore lived on the shores of the large shallow sea called the Tethys Sea, that covered much of North America. It survived on fish and perhaps some species of dinosaurs.

What is a group of Alligators Called?

A group of Alligators is called a congregation.

Alligators tongues are attached to their bottom jaws and they cannot move it around. Therefore they have to raise their heads in order to swallow food. Gravity helps the food go down the alligators throat.Alligators are not immune to snake poison. However, they do have very tough skin and their armoured back protected by bony plates called scutes may prevent a snakes fangs from penetrating the skin.