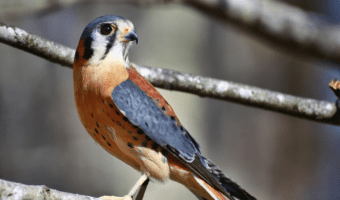 The American kestrel (Falco sparverius) is the smallest North American falcon. It is often called the sparrow hawk, not to be confused with the Eurasian Sparrowhawk (Accipiter nisus) which is a different bird of prey species entirely. It is found throughout most of the American continent, from Alaska and Canada to as far south as Panama in South America.

There are 17 subspecies across its entire range, each having adapted to different environments. Some of the subspecies that live in the Northern extremes of Canada and Alaska are migratory, while others are not.

The American Kestrel is a bird of prey, and has a diet of mostly insects, small lizards and rodents, and also small birds such as sparrows (hence the name).

It is thought that the American Kestrel is the most abundant falcon across North America. While some subspecies such as the non-migratory Southeastern American Kestrel (Falco sparverius paulus) are in decline, as a whole the species is classed as least concern on the IUCN Red List

The American kestrel is a small, agile falcon. It is not as muscular or stocky as other falcons, which has its own benefits for how this bird likes to hunt.

The most notable differences between the male and female American kestrel, is in the feathers of the tail, wings, and chest.

Females have a light brown to rufous back and wings, with a barred pattern of darker brown. The breast and belly are pale with dark brown streaky spots. The tail is a similar color to the back, with many narrow black bands.

Males on the other hand, have bluish-grey feathers in the wing, with black spots throughout. The underside of the wings are white. They have a reddish-brown (rufous) back, with a much lighter, creamy colored belly. The tail of the male is also reddish-brown, but with a single black terminal band.

In both males and females, the head is small with white cheeks, slate-grey on top, with two vertical black stripes on the face.

There are 17 subspecies of American Kestrel, and each of them live in different locations across the range of the Americas and the Caribbean. These subspecies and their locations are:

Across the different subspecies, the American kestrel has adapted to many different environments and habitats. It prefers open habitats such as fields, meadows, and savannas, but can also be found in more urban settings such as parks and vacant lots.

The American kestrel typically nests in cavities in trees, cliffs, or buildings. It will also use nest boxes, and will sometimes steal the nests of other birds such as red-tailed hawks, crows, titmice and merlins.

The American Kestrel is not a fussy eater. It has a wide diet, which varies across its range depending on availability. It is this wide diet, and ability to survive on smaller prey and fewer meals, that has been partly attributed to their wide success as a species.

They are known to eat small rodents such as mice and short-tailed shrews, as well as small lizards and reptiles. Insects are also a common food source, particularly earthworms, grasshoppers, dragonflies, beetles, butterflies and moths.

These birds of prey will also eat smaller birds, like sparrows and starlings, but are also capable of grabbing larger birds like pigeons. They are known to prey on easy targets, such as small birds eating from bird feeders in groups. That is one of the reasons why you should never have a bird box near a bird feeder. Doing so makes an easy target out of a nesting family of birds.

American Kestrels are ambush hunters. They have leaner bodies than other birds of prey that hunt in flight. They are not built that type of energy-intensive hunting, and are most likely to be found perching on a branch or fence post and scanning the ground for prey. When it sees an animal, it will dive down and capture it with its talons.

They will also hunt birds by hovering at height and diving down, rather than engaging with a lengthy chase. They are more likely to eat other birds in urban areas than rurally where easier and smaller prey are available.

The American kestrel is a solitary bird, except during the breeding season. Of those that do migrate, they usually do so alone, though they are also spotted in small flocks too.

They are known to nest year on year in the same territory, and in some cases the same nest. Particularly where a nest has been very successful in the past. In populations that are non migratory (sedentary) they are known to stay around the nesting site year round.

It is a vocal bird, with a variety of calls that it uses to communicate with other kestrels at different times. These vocalizations can be categorised into three sounds:

Those that live in Central and South America tend to be local breeders, non migratory. Those that breed in the Norther parts of Canada, and the USA usually migrate south for the winter.

American Kestrel’s Use In Falconry

Mating pairs will often perch close to each other and preen each other. Courtship usually happens through displays of skilful flight and feeding their prospective partner. Copulation typically lasts about 10 seconds.

By their first year, they are considered adults and will have reached sexual maturity. In the wild they have an average life expectancy of 3-5 years, but can reach much older ages on occasion.

The American Kestrel is classed as a species of least concern on the IUCN Red List, with estimates at over 4 million individuals across the different subspecies. But that doesn’t mean there are no efforts in place to understand and protect the future of these birds.

Some subspecies such as the Southeaster American Kestrel have seen their populations decline by over 80% since the 1940’s, primarily as the result of a decline in suitable nesting sites – habitat loss.

The American Kestrel Partnership was launched in 2012 and allows amateurs and professional scientists to track and manage data from kestrel nest boxes across their range. This helps to better understand the behaviours, successes and challenges these birds face.

Despite being a successful bird of prey themselves, the American Kestrel does have a few predators of their own. These include larger birds of prey such as Northern Goshawks, Barn Owls, American Crows and Cooper’s Hawks. There are also some flightless predators such as rat snakes and corn snakes.