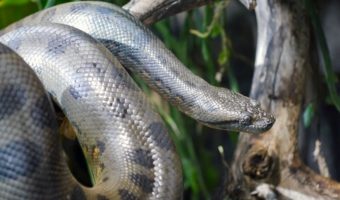 Anacondas are four species of aquatic boa inhabiting the swamps and rivers of the dense forests of tropical South America. The Yellow Anaconda can be found as far south as Argentina. It is unclear how the name originated so far from the snakes native habitat. It is likely due to its vague similarity to the large Asian pythons.

Local names for the Anaconda in South America include the Spanish term ‘matatoro’, meaning ‘bull killer’, and the Native American terms ‘sucuri’ and ‘yakumama’. Anacondas as members of the boa family are sometimes called ‘water boas’. The Latin name for Anaconda is ‘Eunectes’ meaning ‘good swimmer’.

There is some debate about the maximum size of Anacondas and there have been unverified claims of enormous snakes alleged to be as long as 30 – 45 metres (98.4 – 147.6 feet). Some Anacondas, which live in the water, can reach up to 30 feet in length.

The Green Anaconda (Eunectes murinus) is the largest member of the boa family of snakes and the most heavy bodied member of the super-order ‘Squamata’. The Green Anaconda is among the largest snakes in the world. It rivals the Reticulated Python in length, but is typically considerably heavier. It can weigh 250 kilograms (551 pounds) and have a girth of more than 30 centimetres (11.8 inches) in diameter.

Female anacondas are significantly larger than males, having the largest sexual dimorphism of all the snakes.

The primary color of the Green Anaconda is an olive green, with black blotches that run the length of the body. Their head is narrow compared to the rest of the body, with most exhibiting distinctive orange-yellow striping on either side. Their eyes are set high on their head so as to allow the snake to be able to see out of the water without exposing the rest of its body.

The Yellow Anaconda (Eunectes notaeus), is native to South America in countries such as Bolivia, Paraguay, Uruguay, western Brazil and northeast Argentina. The Yellow Anaconda is smaller than the more well known Green Anaconda and reaches an average adult length of about 3 metres (9.8 feet).

Yellow Anacondas have a yellow/brown base color with black blotches and rosettes. Yellow Anacondas live in mostly aquatic habitats including swamps, marshes and brush covered banks of slow moving rivers and streams.

Just about every species of snake on earth has teeth, but the Anacondas teeth are not used for chewing. Most snakes teeth are used for holding onto their prey, preventing them from escaping. Some snakes have venom in two specially designed, extra long teeth which they use to kill their prey.

Anacondas have teeth, however, they are not a venomous snake. They rely on their enormous size and power to subdue their victims. It is possible to be bitten by an Anaconda, but the bite itself would not be fatal.

The Anaconda diet includes deer, wild pigs, birds and large rodents and also aquatic animals such as fish and reptiles (caiman). Anacondas swim well and kill their prey by strangling them. If that does not work, they drown them. These snakes can survive years without eating.

Anacondas also typically feed on tapirs, capybaras, peccaries, turtles, sheep and even dogs. They have been known to occasionally prey on jaguars and attacks on humans can be confirmed, although this is rare.

Anacondas swallow their prey whole, starting with the head. This is so the legs fold up and the prey goes down smoothly. The Anaconda can swallow prey much bigger than the size of its mouth since its jaw can unhinge and the jaw bones are loosely connected to the skull. While the snake eats, its muscles have wave-like contractions, crushing the prey even further and surging it downward with each bite.

The Anaconda is most active at night which makes it a nocturnal reptile. Although they are not venomous, they defend themselves by inflicting severe bites, but actually kill its prey by constriction.

Most local people kill these snakes on sight, out of the fear that they are man-eaters. In most instances, if an Anaconda senses humans in the area, it will retreat in another direction. Human death by an Anaconda is quite rare. Anacondas themselves are preyed by jaguars, large caimans and by other Anacondas. A wounded Anaconda can also fall prey to piranhas.

The Anaconda is an amphibious snake. It gives birth to live young. Younger Anacondas feed on mice, rats, chicks, frogs and fish.

Check out our other fascinating articles about animals.