You are here: Home / Animals / Ants 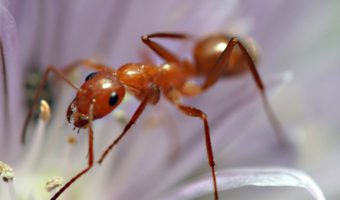 For more than 100 million years, ants have been living on the Earth. They can be found almost anywhere on the planet. As of 2006, there are 11,880 known ant species, most of which reside in hot climates.

Ants are members of the family of social insects which means they live in organised colonies. The family of ants is known as the Formicidae of the order:

Hymenoptera (An order of highly specialized insects with complete metamorphosis that include the bees, wasps and ants that often associate in large colonies with complex social organization).

There is a great diversity among ants and their behaviours. Ants range in size from 2 to about 25 millimetres (about 0.08 to 1 inch). Their color may vary, most are red or black, but other colors can also be seen, including some tropical groups with a metallic lustre.

Ants are one of the most successful groups of insects in the animal kingdom. They are of particular interest because they are a social insect and form highly organized colonies or nests which sometimes consist of millions of individuals. Colonies of invasive ant species will sometimes work together and form super-colonies, spanning a very wide area of land. Ant colonies are sometimes described as superorganisms because they appear to operate as a single entity.

Ants have colonized almost every landmass on Earth. They can constitute up to 15% of the total animal biomass of a tropical rainforest; in the Amazon the combined weight of the ants is said to be four times larger than that of the tetrapods in the same area. It has also been estimated that the combined weight of all ants exceeds the weight of mankind.

Many ants eat the sweet fluid called ‘honeydew’ excreted by aphids. Some species keep and protect aphids – sometimes even in their own nests. Ants will transport aphids from plant to plant and take the eggs into their colony for the winter. Ants will also defend aphids from insect predators, such as lady beetles and lacewings, by attacking them in large numbers. Aphids are an ants favourite food!

Ants are clean and tidy insects. Some worker ants are given the job of taking the rubbish from the nest and putting it outside in a special rubbish dump. Each colony of ants has its own smell. In this way, intruders can be recognized immediately. Many ants such as the common Red species have a sting which they use to defend their nest.

Some species of ant are known for attacking and taking over the colonies of others ant species. Others are less expansionist but nonetheless just as aggressive; they attack colonies to steal eggs or larvae, which they either eat or raise as workers. Some ants, such as the Amazon Ants, are incapable of feeding themselves, but must rely on captured worker ants to care for them.

Ant communication is accomplished primarily through chemicals called pheromones. Because most ants spend their time in direct contact with the ground, these chemical messages are more developed than in other Hymenopterans. So for instance, when a forager finds food, she will leave a pheromone trail along the ground on her way home. Home is typically located through the use of remembered landmarks and the position of the sun as detected with compound eyes and also by means of special sky polarization-detecting fibres within the eyes.

Ants are useful for clearing out insect pests and aerating the soil. On the other hand, they can become pests when they invade homes, yards, gardens and fields. Carpenter ants damage wood by hollowing it out for nesting. Nests may be destroyed by tracing the ant trails back to the nest, then pouring boiling water into it to kill the queen.

Ordinary chalk can be used to keep ants at bay; drawing a line or circle around the protected area may prevent them from entering.

In some parts of the world large ants have been used as sutures (stitches) by pressing the wound together and applying ants along it. The ant in defensive attitude seizes the edges in its mandibles and locks in place. The body is then cut off and the mandibles can remain in place for up to three days closing the wound.

Some species, called killer ants, have a tendency to attack much larger animals during foraging or in defending their nests. Human attacks are rare, but the stings and bites can be quite painful and in large enough numbers can be disabling.

An ant hill, in its simplest form, is a pile of earth, sand, pine needles, or clay or a composite of these and other materials that build up at the entrances of the subterranean dwellings of ant colonies as they are develpoed. A colony is built and maintained by legions of worker ants, who carry tiny bits of dirt and vegetation in their mandibles and deposit them near the exit of the colony.

Ants normally deposit the dirt or vegetation at the top of the hill to prevent it from sliding back into the colony.

However, in some species they actively sculpt the materials into specific shapes and may create nest chambers within the mound.

An ant colony is an underground lair where ants live. Colonies consist of a series of underground chambers, connected to each other and the surface of the earth by small tunnels. There are rooms for nurseries, food storage, and mating.