You are here: Home / Animals / Armadillo 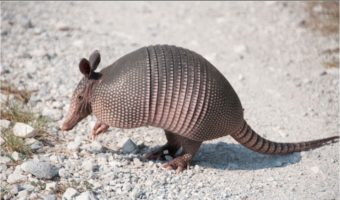 Armadillos are mammals of the order Cingulata and family Dasypodidae, and are best known for having their very own protective, hard shell armor. With a natural defense system in place, the armadillo has been able to thrive for millions of years and can be found in the western hemisphere, in North, South and Central America.

The scientific name for Armadillo is Dasypodidae.

The armadillo is the only mammal to have a full developed shell, and types of armadillos can be distinguished from each other by the number of rings on their shell. There are nine extinct types, and 21 extant species, all native to the Americas. There are two main families of armadillos: Dasypodidae and Chlamyphoridae, with subfamilies of each.

Of the two families, Chlamyphoridae is the most populated. Only one genus of Dasypodidae remains, though it contains the widespread nine-banded armadillo. It is also distantly related to the anteater and sloth.

The name ‘armadillo’ means “little armored one” in Spanish, and there’s a lot to learn about these creatures. Read on to find out more.

With 21 different species, they come in all shapes and sizes! Different species can range in weight from 4kg – 30kg (9lbs – 66lbs) and lengths of 36cm – 75cm (14in – 30in). The smallest species of armadillo is the pink fairy, and the largest species is the giant armadillo. Giant armadillos also have up to 100 teeth and six-inch claws.

They look a bit like armored opossums (although they are unrelated) and have pointed snouts, short yet strong legs, a long tail, sharp claws, and big ears. They are usually grey or brown in color, but can also be pink, red or yellow, too.

Their armor is formed by plates of dermal bone that are covered in overlapping scales known as scutes. These scales are made from keratin, a protein also found in hair and nails.

Evidence suggests that this keratin is actually just modified skin that evolved for defensive protection. Most species have rigid shields over the shoulders and hips, with a number of bands separated by flexible skin covering the back and flanks. The number of bands varies from species to species. Armor also covers the top of the head, the upper parts of the limbs, and the tail.

The underside of the animal is never armored, and is simply covered with soft skin and fur, and they use these hairs to feel their way around. The eyesight of the armadillo is poor, so they hunt with a highly developed sense of smell.

The sharp claws of the armadillo are used to dig deep into the ground to protect their softer parts from damage when threatened by a predator. Contrary to popular belief, it is only one species of armadillo, the three-banded armadillo, that can roll itself into a ball when in danger.

Armadillos have a low average body temperature (between 33–36 °C (91–97 °F) and metabolic rate. This means that they can be very susceptible to the cold weather.

The lifespan of an armadillo ranges from four to twelve years. In captivity, they can even reach up to thirty years old!

Armadillos are omnivores and the specific diet varies from species to species. However, generally, armadillos eat insects, grubs and other invertebrates. They do not have sharp incisors or canines and instead have short, flat teeth, so, most commonly, they eat small animals like ants and termites, as well as beetles, earthworms, cockroaches, wasps, spiders, snails and scorpions. Other sources of food include fruits, vegetation and eggs.

They use their claws to find food, helped along with their excellent sense of smell. Their sense of smell makes up for their very poor eyesight. The armadillo has a remarkably long tongue, like the anteater, to suck up its prey hiding deep within the ground. This can cause havoc for farmers, as armadillos can ruin crops by searching for food!

Armadillos are generally solitary animals, especially when they are hunting and foraging, but will occasionally come together and socialize. However, this is usually only for breeding reasons or for huddling close together to keep warm when it is very cold.

Armadillos are diggers and will use their sharp claws to create burrows in the ground. They line these burrows with leaves and vegetation and they provide the armadillo with a soft and comfortable home. They usually sleep for up to 16 hours in their burrow, and forage for food during the mornings and evenings.

Armadillos have short legs but can move quite quickly, as fast as 30 mph. The nine-banded armadillo can also move well through water, even underwater, and can hold its breath for as long as six minutes. It can also capable of increasing its buoyancy by swallowing air, inflating its stomach and intestines.

Some species of armadillo breed all year round, while others only breed at specific times of the year. Male armadillos rely on their strong sense of smell to locate a potential mate.

These animals have an interesting and unique reproduction cycle. The male has one of the largest penis sizes to body lengths among all mammals, and the females have the ability to delay implantation of the egg after copulation until food is more plentiful.

Armadillos have a gestation period of 60 to 120 days, depending on the species, and usually give birth to four monozygotic young (identical quadruplets). However, litter sizes can vary between one to eight young. Their burrows can vary in size and can be up to 15 feet (4.5 m) wide.

The long armadillos are born with soft, leathery skin which hardens within a few weeks, and they reach sexual maturity in three to twelve months, depending on the species.

Armadillos are endemic to the Americas, particularly Central America and South America. However, the nine-banded species is found in North America, too. The nine-banded armadillo is actually the official state animal of Texas. It is thought that, as the climate warms, armadillos may expand to northern United States and Canada.

These animals live in grasslands, rainforests, wetlands, and semi-desert regions and, thanks to their diverse diet, they can live in many different places. Armadillos generally prefer sandy or loam soils that are loose and porous, as this makes digging for food a lot easier.

According to the International Union for Conservation of Nature (IUCN), armadillos are not endangered. Their current population is unknown, but most species are not listed as under concern.

That being said, some species are facing extinction, such as the Brazilian three-banded armadillo and the giant armadillo. This could be down to loss of habitat due to deforestation and loss of the rainforest.

The biggest predators of armadillos are jaguars, coyotes, bobcats, wolves, bears, and large hawks. Their armor is their biggest means of defense, but they will also lash out with their claws or try to run away.

Unfortunately, armadillos are sometimes hunted for their meat, especially in South America. They are also common roadkill due to their habit of jumping 3–4 ft vertically when startled, which puts them into collision with the underside of vehicles. They have even been known as the “Hillbilly Speed Bump” for their tendency to get run over by vehicles.

Armadillo shells have traditionally been used to make the back of the charango, an Andean lute instrument, too.

Armadillos are naturally susceptible to several human diseases, including leprosy.

This type is present in Bolivia, in the region of the Puna. It has 18 bands of which 8 are movable. They are colored yellow/light brown. They have a body length of between 8 – 15 inches and a tail length of 3 – 6 inches. It lives in grasslands at high altitudes.

Their omnivorous diet includes small vertebrates such as birds and reptiles and it also eats insects, roots, seeds and fruit. During hot weather, this species is active at night and active during the day when weather is cooler. Burrows can be as long as 10 feet in length. They are solitary except during breeding season which is during the summer months.

The Andean hairy armadillo has a gestation period is 2 months, with two young are born in the burrows. Females can have multiple litters per year, and males do not help to raise the young. sexual maturity is reached at around 9 months and they have a life span of up to 16 years. Andean hairy armadillos are an endangered species.

This type is endemic to Brazil, South America and is one of only 2 species of armadillo that can roll itself into a ball. Its referred habitat is savannas and dry woodland and its main diet includes ants and termites. However, they also eat mollusks, worms, fruit and carrion.

The Brazilian three-banded armadillo has a weight of 1.5 kilograms and body length between 41 – 53 centimetres. Like most armadillos, it has armoured upper parts and long course hair on the under parts.

This species is usually solitary, but will occasionally travel in family groups of up to 3 members. They are nocturnal animals but have been known to forage during the day, too.

Its breeding season is from October to January and its gestation period lasts 120 days after which a single, blind infant is born. Infants are able to roll into balls within a few hours of birth. They are weaned at 10 weeks and reach sexual maturity between 9 – 12 months. The Brazilian three-banded armadillo has a life span of up to 15 years in the wild. Brazilian three-banded armadillos are classed as a ‘vulnerable’ species.

This armadillo is found in Argentina, Bolivia, Peru, Uruguay, Brazil and Paraguay. It has a body length of 63.5 centimetres and weighs 5.40 kilograms, resembling the the giant armadillo, yet lacks the armour on the tails.

They are usually found along rivers and on grasslands, and are nocturnal animals who forage for food at night. When threatened, they are able to bury themselves within minutes. They make a grunting sound similar to a pig when handled.

The greater naked-tailed armadillo’s diet consists mainly of ants but they also consume invertebrates found in anthills and termite mounds. The females give birth to one infant per year, and their life span is 12 – 15 years.

This species is found in central Argentina and is the smallest of the armadillos, with a body length of 4 – 5 inches and weight of 120 grams. It has very small eyes and ears and has long silky hair on its under parts and is colored pink/pale rose.

The pink fairy armadillo’s preferred habitat is dry grasslands and sandy plains with thorny buses and cacti. Its main diet is ants and ant larvae, and, subsequently, their burrows are usually made close to ant nests. This armadillo has the ability to bury itself in seconds if alarmed.

Females give birth to one infant, sometimes twins and they have a life span of 5 – 10 years. The pink fairy armadillo is listed as an endangered species.

The screaming hairy armadillo is found in Argentina, Bolivia, Chile and Paraguay. Its name is derived from the high pitched squeal it makes when threatened.

This species has a length measuring between 220 to 400 millimetres and a weight of 84 kilograms on average. The length of its tail is from 90 to 175 millimetres. This species has a total of 18 bands with 6 – 8 movable bands and they have more hair growth than other armadillo species. Their limbs and under parts have light brown and white hairs.

This species is a solitary, nocturnal animal that forages for food during the night. Its diet consists mainly of insects and plants, however, during the summer, it will also feed up on lizards, snakes and rodents.

The screaming hairy armadillo has a gestation period is is 60 – 75 days, with two young in a litter per year. Its sexual maturity is reached at 9 months.