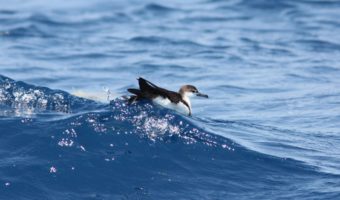 Audubon’s shearwater has a worldwide distribution, with populations in addition to the Galapagos in the western and central Pacific, the Philippine Sea, the Indian Ocean and the Caribbean (although it is no longer present in Bermuda).The Audubon’s Shearwater is the smallest of the shearwaters that visit North America. The Galapagos population is considered to be an endemic subspecies.

The species is sometimes also known variously as Baillon’s shearwater, tropical shearwater, Bannerman’s shearwater, Mascarene shearwater and Persian shearwater. This bird belongs to the family Procellariidae and the genus Puffinus.

Audubon’s shearwater bird itself has around 10 subspecies. Several have at one time or another been suggested to constitute separate species. For example, the Galápagos Islands population has turned out to be a very distinct species, the Galápagos Shearwater is apparently related to the Christmas Shearwater.

Audubon’s shearwater can reach 30 centimetres (12 inches) long and weigh up to 170 grams, which is about half the size of the Greater Shearwater. While there are some variations in size between the different populations, they average this size.

The wingspan is 64 to 72 centimetres (25 to 28 in), the tail is around 8.5 centimetres (3.3 in) long, the exposed culmen measures 3 centimetres (1.2 in) or slightly less, and the tarsus is around 4 centimetres (1.6 in) in length. It often holds its tail partially spread, and sometimes fans it out when banking or gliding, which makes the bird’s size more noticeable. When held closed, the tail is slightly wedge-shaped.

Males and females look similar. These birds have black-brown upperparts, rectrices and undertails, while the underparts and the head below the eye level is white. The iris is dark, the feet are dull pink with a black wash and black toenails, and their bills are grey, darker towards the tip, and have a pinkish hue. They can be confused with the Manx Shearwater which has white undertail covers.

The lifespan of the Audubon’s shearwater is around 19 years. 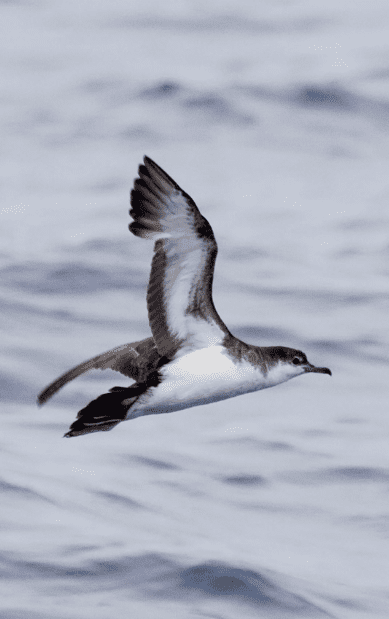 The Audubon’s shearwater feed on small planktonic crustaceans and fish larvae, which they take from the surface, and on small fish, and squid, which they catch by plunge diving to depths of about six feet.

The Audubon’s shearwater is colonial, nesting in small burrows and crevices in rocks and on earthy slopes on atolls and rocky islets. A group of shearwaters are collectively known as an “improbability” of shearwaters.

It is not uncommon to see these birds in fishing in large flocks, or in mixed flocks with pelicans and brown noddies. When flying, the Audubon’s shearwater flies low, generally remaining within a few feet of the water. It’s typical pattern is to alternate between stiff-winged flutters and brief glides.

These birds can be noise too, although their twittering calls and mewing are often only heard at night in the breeding colonies.

The Audubon’s shearwater’s breeding season varies according to location and subspecies. They will mate in small burrows and crevices in rocks. Both parents share the responsibility of incubating the single egg, taking turns between 2 to 10 days each. The egg takes about 50 days to hatch. The nestlings are brooded for half a week to one week, after which time the parents will leave it mostly alone in the burrow and spend most of their time foraging and feeding. It will take 70 days to rear to fledging. Once fledged, a chick will take 8 years to reach breeding age.

Young Audubon’s shearwater are covered with down-like feathers, which are grey on top and white underneath.

Audubon’s shearwater ranges across the Indian Ocean north to the Arabian Sea, throughout the north-west and central Pacific, in the Caribbean, and parts of the eastern Atlantic. This bird is mostly found in tropical waters, but is adaptable and can be found in pelagic, offshore and inshore waters.

Unlike the larger shearwaters, adult Audubon’s shearwaters are not thought to wander much or undertake great migrations. However, their young birds do so before breeding, and western Indian Ocean birds may gather in large numbers at the upwelling zone in the Arabian Sea. 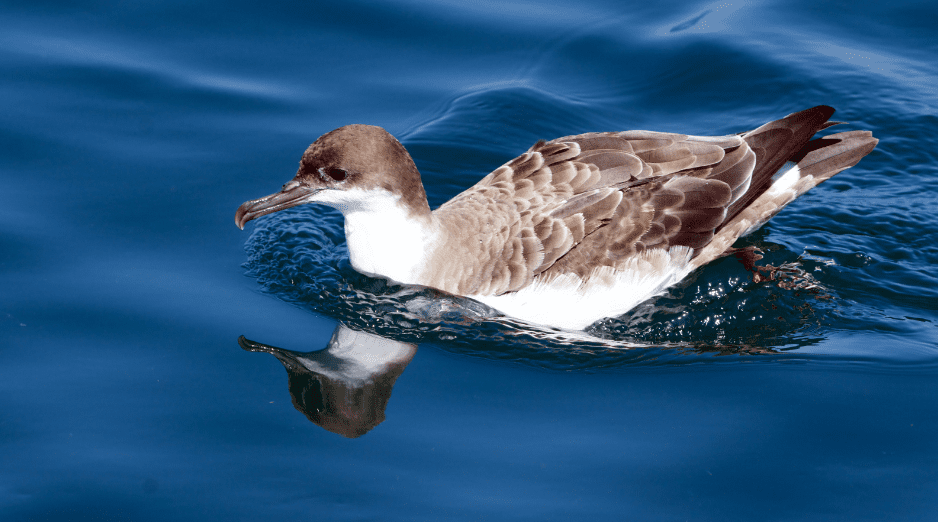 While some small populations are threatened, the species as a whole is not considered to be globally threatened. It is listed as Least Concern by the IUCN. On land, their predators are feral cats, rats and goats.