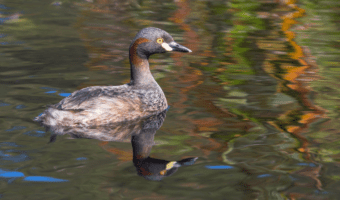 The Australasian Grebe (Tachybaptus novaehollandiae) is a small water bird that is found throughout Australia and many Pacific Ocean islands and is now also resident in New Zealand where it was self introduced.

The Australasian Grebe is one of the smallest members of the grebe family: Podicipedidae.

The Australasian Grebe is a duck-like bird that measures between 25 – 27 centimetres (9.9 – 10.6 inches) in length. Males tend to be slightly larger with a longer bill.

The Australasian Grebe has two distinct plumage phases. The plumage in both male and female changes depending on whether it is breeding season or non-breeding season. Their non-breeding plumage is dark brown to grey above, including the head, and silvery-grey underneath. At the base of the bill, there is a white oval patch of bare skin.

During the breeding season, their heads turn a glossy black color and they develop a striking rich chestnut colored facial stripe which extends from the base of their neck to just behind the eye. The white oval patch at the base of their bill turns pale yellow and becomes more noticeable. 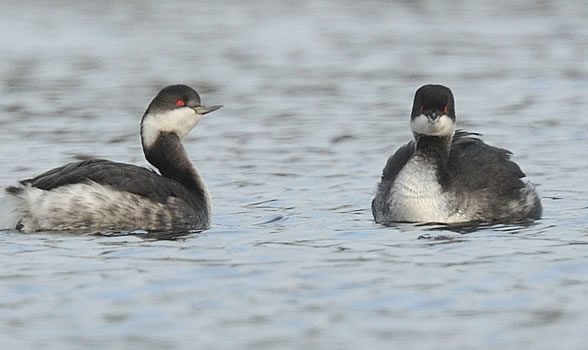 Australasian Grebes have yellow eyes, dark green/grey feet, a small white tail and black bills with a white tip. They often ruffle their feathers to give them a rounded appearance.

The Australasian Grebe is found in a variety of wetland environments including freshwater ponds, freshwater lakes, farm dams, slow moving rivers and small waterways. It is a poor flyer and tends to stay on the water, hiding among plants and vegetation for safety.

The Australasian Grebe’s diet includes small fish, particularly crayfish, water insects and other aquatic animals such as crustaceans, pond snails. Grebes catch their prey during deep underwater dives, sometimes taking their prey to the surface of the water to eat. Grebes can dive to depths of over 10 feet when searching for food. It mainly feeds at dawn and dusk.

Australasian Grebes are shy birds and excellent swimmers and when approached, they will disappear under the water with a quick dive and swim away under the water.

These small water birds are quite vocal during breeding season and defend their territories against rival birds. This species of grebe produces a loud, rapid metallic chittering noise, which becomes higher and harsher when threatened.

Breeding season occurs January to April in the northern regions and September to January in the southern regions.

The Australasian Grebe may produce three successive broods of chicks in one season. Nests are generally a floating mound of aquatic vegetation which is attached to a submerged reed or branch surrounding a body of water.

The female grebe lays 4 – 7 pale blue eggs in the nest and are incubated by both parents for around 21 days. Eggs turn dark brown during the incubation period.

When hatched, the striped, downy chicks are able to swim immediately. Young grebes are grey/black in color with a chestnut patch on the crown and white stripes along the sides of the head, neck and back. Chicks are cared for by both parents from birth. The chicks remain with their parents for some time after fledging but are driven away when the parents begin breeding again. Breeding occurs in good conditions.

The life span of the Australasian Grebe may be up to 11 – 12 years.

The Australasian Grebe is classed as ‘Least Concern’ by the IUCN.

Australasian Grebes eat their own feathers and feed them to their chicks. This behaviour is thought to help prevent injury from any sharp fish bones that are swallowed.