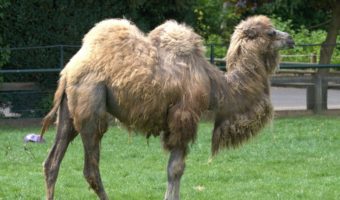 The Bactrian Camel (Camelus bactrianus) is a large even-toed ungulate native to the steppes of eastern Asia. The Bactrian camel has two humps on its back, in contrast to the dromedary camel which has one and are rugged cold-climate camels. Bactrain Camels have two coats, the warm inner coat of down and a rough outer coat which is long and hairy. 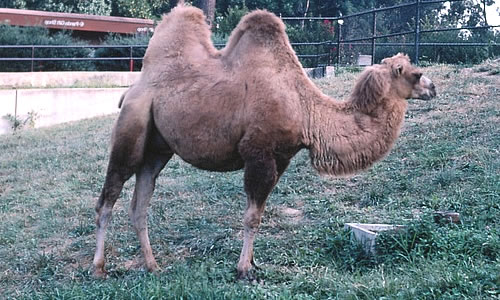 Bactrain Camels shed their fibre in clumps consisting of both coats which can be gathered and separated. Bactrain Camels produce about 7 kilograms (15 pounds) of fibre annually. The fibre structure is similar to cashmere wool. The down is usually 2 to 8 centimetres (1 – 3 inches) long. Camel down does not felt (non-woven cloth that is produced by matting, condensing and pressing fibres) easily. The down is spun into yarn for knitting.

Nearly all of the estimated 1.4 million Bactrian camels alive today are domesticated, however, in October 2002 the estimated 950 remaining in the wild in northwest China and Mongolia were placed on the critically endangered species list.

The Bactrain camel measures 260 to 400 centimetres from head to tail and average about 7 feet tall at the shoulder. They weigh between 300 to 690 kilograms.

Bactrain Camels are herbivores, eating grass, leaves and grains and capable of drinking up to 120 litres of water at a time. Their mouths are extremely tough, allowing them to eat thorny desert plants. Bactrain camels can drink salty and brackish water.

After a 12 to 15 month gestation period, a female bactrain camel gives birth to a single offspring, weighing about 37 kilograms. The young reaches adult size in about 5 years. Bactrain camels have a life span of up to 50 years of age.

Camels can be found alone or in groups of up to 30 individuals, led by a single adult male.

Bactrain Camels are supremely adapted to protect themselves against the desert heat and sand, with wide, padded feet and thick leathery pads on the knees and chest, nostrils that can open and close, ears lined with protective hairs and bushy eyebrows with two rows of long eyelashes.

The IUCN’s Red List of Threatened Animals lists wild Bactrian camels as critically endangered. Heavy hunting and competition with domestic animals for water and pasture were the principal causes of decline up to the 1960’s. Hunting has continued to have a major impact up to the present day. The bactrain camel is one of the worlds most rarest animals.