You are here: Home / Animals / Badger 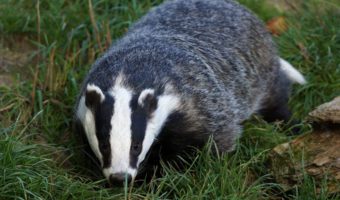 Badgers (Meles meles), are the largest members of the Mustelid family and are Britains largest land carnivores. Badgers are rarely seen and those who catch a glimpse are very fortunate. Badgers are nocturnal, underground dwellers that are quite common on the British Isles.

There are approximately 300,000 badgers in the United Kingdom. This may seem like a large number, however, an estimated 47,500 are killed in road accidents every year. The badger is an endangered species in many parts of the UK.

Badgers measure around 75 centimetres in length and have a tail length of around 15 centimetres. Their average weight is 8 – 9 kilograms in Spring and 11 – 12 kilograms in Autumn, however, weights can vary enormously. Badgers are thick set, round backed mammals that are very powerful for their size. 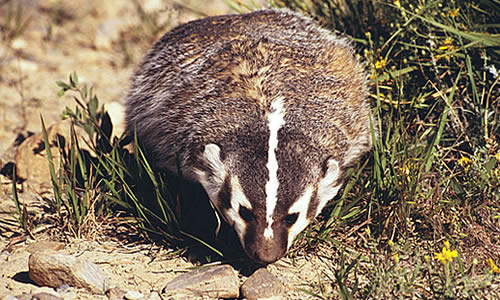 Badgers have course, grey body fur and black colored short, but powerful legs and their paws are adapted with long, sharp claws that are very useful for digging. It is generally believed that badgers have poor eyesight, however, their hearing and sense of smell are excellent. Badgers have a distinctive black and white striped face and white-tipped ears.

Badgers rarely venture out during the day and live in an extensive network of underground tunnels and nests, known as a ‘sett’. Badgers prefer a well drained soil and often dig their setts under matted tree roots to provide stability to the soil. Nest chambers in the tunnels are lined with dry grass, bracken and straw. Bedding may be taken to the entrance of the sett in order to air in the sun. When emerging at nightfall, they go in search of food, usually venturing into a nearby field or woodland. Badgers emerge at dusk in summer to spend the night foraging. In winter, Badgers are much less active, however, they do not hibernate.

Badgers are mainly carnivores but also referred to as omnivorous and insectivorous and a tasty earthworm or juicy bulb will satisfy their hunger along with small mammals, lizards, frogs, insects or young rabbits and birds. Earthworms make up 50% of their diet. Depending on the time of year badgers also feed upon berries, fruits, nuts, roots and cereals if other food sources are short. Badgers are also known to eat carrion (the carcass of a dead animal). They also dig up the nests of wasps and bumblebees in order to eat the larvae.

In urban areas, some badgers scavenge food from bins and gardens.

In areas of the UK and Europe where food supplies are plentiful, badgers are social creatures, living within groups of between 4 and 12 individuals often called ‘clans’. There is usually one dominant male (a boar) and female (a sow). The territory of a badger is usually bordered by latrines and dung pits. As with many wild animals if other groups cross these borders, fierce fights can occur. In other parts of Europe, where food is more scarce, Badgers tend to adopt a more solitary existence and are not required to mark out a territory.

Mating occurs during the summer, however, implantation is delayed until December which means they can hold fertilised eggs in suspended development until the right time for breeding occurs. The gestation period is 7 – 8 weeks. One litter of 2 – 5 cubs is born from January to March.

Adult badgers protect, discipline and groom their young. They are very house proud and do not intentionally interfere or disturb anyone.

Badgers live for up to 15 years (average 3 years) in the wild and up to 19 years in captivity. If they survive their first year, the most common cause of death is by road traffic.

Badgers in Britain have in past times been threatened by badger-baiting, a sport in which the badger was attacked by a succession of dogs until it was no longer able to fight and resulted in death. This activity was common throughout middle age Great Britain until an Act of Parliament banned it in 1835. Badger digging was also made illegal in 1973 under the Badger Act. The only thing to threaten the badger population nowadays is any disease within the species, loss of habitat through agriculture and development or road traffic accidents. However, they are well protected by law, the most recent being The Protection of Badgers Act in 1992, and there are many local groups around the country that actively promote and protect this popular charming creature.