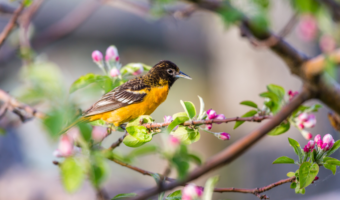 The Baltimore Oriole (Icterus galbula) is one of the most striking birds in North America. These icterid (new world) blackbirds are easily recognizable by their bright orange and black plumage. Orioles are on the medium to small side, averaging roughly six to nine inches in length. They have a long, slender bill and a thin, curved tail.

Baltimore orioles are migratory, spending the winter in Central America and Mexico. In the spring and summer, they can be found throughout eastern North America, from Canada to Mississippi. These birds are highly adaptable and can thrive in a variety of habitats, from forests to suburbs to city parks.

These birds are omnivores, and feed on a wide variety of foods, including insects, fruits, and nectar. They are particularly fond of cherries, and other dark colored fruits that are high in sugar. These high energy fruits give them the boost they need before migrating.

The easiest way to tell the difference between a male and female Baltimore Oriole is by their coloring.

Males have an entirely black head with wings that are black except for a white wing bar. The rest of their body is orange, including their back and shoulder patches. Their tail has a black V shape in the middle with orange and yellow around the borders.

In contrast, adult females come in a variety of colors including drab, bright yellow, and bright orange. Their heads tend to be slightly lighter in color with shades like gray, olive or brown. They share a greater resemblance to the coloring of juvenile birds than males do.

The same color is present on their backs and wings. Wings feature two white bars while the tail is one uniform color that can range from dull orange to brown.

As they age, the Baltimore Orioles become brighter orange and yellow each year when they molt.

They have a distinctive, charming song and love to be perched high up in the trees.

Baltimore orioles are found in eastern North America. They live in open woodlands, parks, and gardens. They are also seen in orchards, farmlands, and suburban areas. You are unlikely to find them in deeper areas of forest though.

They are easy birds to attract to your back yard with the right feeders and food, and will often return year on year.

These birds breed from eastern Canada to the Gulf Coast, the Great Lakes region, and New England. They spend winters in Central America, Mexico and the southern United States. While summer months they spend further north, around the Nearctic.

They nest at height in the trees, usually at least 7 meters off the ground, particularly in elm, maple or willow trees.

Baltimore orioles are omnivorous birds that eat a variety of foods, including insects, fruits, and nectar. They forage for food in trees and on the ground.

Orioles use their long bills to extract insects from crevices in trees and branches. They also often drink nectar from flowers by sucking it up through their long bills.

They are expert foragers, spending most of their time high in trees where they hunt leaves and small branches for insects, flowers, and fruit. You may also see them lower down if you are lucky, as they are also known to pluck fruit from vines and bushes. If they are feeling particularly adventurous they may also be seen sipping nectar from hummingbird feeders!

Fruits that they consume include cherries, grapes, apples, figs, and oranges. Orioles also drink nectar from flowers such as honeysuckle, trumpet creeper, and dogwood.

If you want to encourage them into your yard, you can hang orange halves from trees or from your feeders. They absolutely love that!

Baltimore orioles are quite solitary birds, other than during breeding season. They are known for their cheerful and distinctive song, which is often heard during the spring and summer months. In fact you are most likely to hear them before you see them. Their song is often a dead giveaway to where they are perched high up in the trees.

They are a migratory species, wintering in the south, but whatever the season, they are commonly spotted in residential areas, yards and gardens, looking for an easy meal. They are not very social birds outside of breeding season, but they are friendly enough around feeding areas. There will often be several pairs that visit a good feeding ground.

These birds build intricate nests out of twigs, grapevines, or other materials. The nests can be quite large, sometimes housing up to seven eggs.

Spring is when males find their mates by finding a good territory and displaying to females. To do this, they sing and chatter while hopping around on different perches in front of the female. The may also bow with wings lowered and tail fanned to impress the ladies. If she is interested, she will respond back with calls or a wing-quiver display. If she’s not then she will ignore the displays.

The female oriole will lay between 3-7 eggs in the nest. The eggs are then incubated until they hatch around 12 to 14 days later. Once hatched, both parents take turns feeding the young chicks and the female will brood them for around two weeks. It’s not long after this that the young chicks will fledge and become independent.

The Baltimore oriole is not currently considered to be at risk of extinction. However, like many other bird species, they are facing threats from habitat loss and degradation. It is important to protect their natural habitats so that these beautiful birds can continue to thrive.

The Baltimore Oriole has many predators, and this is one of the main contributors to their rate of mortality. At all stages of live, as eggs, fledglings and adults, they face a range of predators.

There are many birds that will raid their nests, including blue jays, magpies and crows. They might also find squirrels and domestic cats trying to get an easy meal from the nest.

Out of the nest and in flight they are at risk from many types of raptor too. Particularly, peregrine falcons, some types of hawk including the cooper’s hawk, great horned owls and barn owls. There are some birds of prey such as marlins, that will also pick them off on the wing when they are migrating.

They are also susceptible to parasites and diseases, which can sometimes lead to their death.