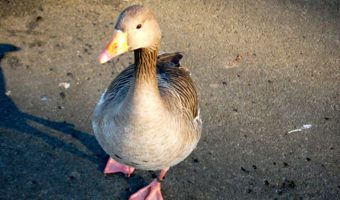 The Bean Goose is a rare winter visitor to Britain. There are two regular wintering flocks of Taiga Bean Goose, in the Yare Valley, Norfolk and the Avon Valley, Scotland. A formerly regular flock in Dumfries and Galloway no longer occurs there. Tundra Bean Goose has no regular wintering sites, however, it is found in small groups among other grey goose species.

Among the most regular localities are WWT Slimbridge, Gloucestershire and Holkham Marshes, Norfolk. The Bean Gooses English and scientific names come from its habit in the past of grazing in bean field stubbles in winter. 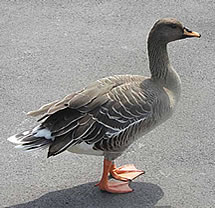 The bean goose is one of the ‘grey geese’. It tends to be darker and browner than the other species in this group and also has a darker head and neck.

The Bean Gooses beak is black at the base and tip, with an orange band across the middle.

Their legs and feet are also bright orange.

There are five subspecies, with complex variations in body size, beak size and pattern. Generally, size increases from north to south and from west to east. Some ornithologists (those who study birds) split them into two species based on breeding habitat, whether in forest bogs in the sub arctic taiga or on the arctic tundra.

The Bean Goose survives on grass, cereals, potatoes and other crops.

The Bean Goose winters on our shores in small numbers, with Mid-Yare Nature Reserve being a particularly good spot to see them from October to March. Around 500 bean Geese winter in Britain each year.

Autumn gatherings of birds depart for Norfolk at intervals during mid-November to mid-December, but with late cold weather arrivals into January. Despite often impressive numbers here the proportion of juveniles tends to be low. Perhaps most geese with families halt at an earlier stage in their migration.

The bean Goose breeds in north Scandinavia, north Russia and north Asia and visits Britain in small numbers in autumn and winter. Most of the birds that winter here come from Scandinavia, where the breeding population has declined in the last 20 years. Possible reasons for this decline include increased human disturbance, changes in agriculture and direct persecution.

Scotlands rarest goose was granted new protection in February 2006. The birds belonged to the last flock of bean geese in Scotland. A £132,000 scheme was launched to safeguard the last remaining flock of bean geese, which spend every winter between Falkirk and Cumbernauld.

A flock of more than 200 Taiga bean geese visit the Slammanan plateau from October to February every year. Scottish Natural Heritage (SNH) asked local farmers to help maintain land to provide a suitable habitat for the geese to feed, rest and roost. The bird was common in Scotland in the 19th Century but this was just one of two flocks remaining in the UK.