You are here: Home / Animals / Bees 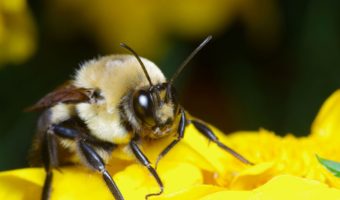 There are over 20,000 species of bees in the world in nine recognised families. There are still many unclassified species therefore the total population could be even higher. Bees can be found in every habitat on the planet that contains flowering dicotyledons – a name for a group of flowering plants whose seed typically contains two embryonic leaves or cotyledons (part of the embryo within the seed of a plant).

Bees belong to the largest insect order which also includes wasps and ants. They can survive almost everywhere, except in polar regions (Arctic and Antarctic) or at high altitudes.

Based on their behaviours, bees can be roughly divided into three groups –

There are around 400 species of Social Bees and these are grouped as the Bumblebees and Honeybees.

Bees are very hard working and always seem to have endless energy. Bees buzz around visiting flower after flower collecting pollen and nectar. Bees are adapted for feeding on nectar and pollen, nectar is used as an energy source and pollen used primarily for protein and other nutrients. Most pollen is used as food for larvae.

Bees have a long proboscis (an elongated tube from the head of an insect) that enables them to obtain the nectar from flowers. Bees have antennae almost universally made up of thirteen segments in males and twelve in females. They all have two pairs of wings, the back pair being the smaller of the two. In very few species, one sex or caste has relatively short wings that make it difficult or impossible to fly. 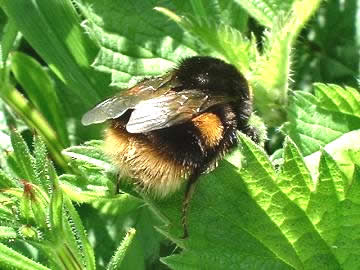 Many species of bees are poorly known. The smallest bee is a dwarf bee (Trigona minima) and it is about 2.1 millimetres long. The largest bee in the world is Megachile pluto (an Indonesian leafcutter bee that uses resin to make compartments in its nest), which can grow to be as large as 39 millimetres. The most common type of bee in North America is the ‘Halictidae’, or ‘sweat bee’, though this may come as a surprise to natives, as they are so small and often mistaken for wasps.

The most common species of bee is the Western honey bee, which produces honey, as do a few other types of bee. Human management of this species is known as beekeeping or apiculture (the practice of intentional maintenance of honey bee colonies, commonly in hives).

Bees periodically stop foraging and groom themselves to pack the pollen into the scopa (pollen carrying apparatus), which is located on the legs in most bees and on the ventral abdomen on others.

Pollen and nectar are usually combined together to form a ‘provision mass’, which is often soupy, but can be firm and formed into various shapes. It is stored in a small chamber (a cell), with the egg deposited on the mass. The cell is typically sealed after the egg is laid and the adult and larva never interact directly (a system called ‘mass provisioning’).

The earliest animal-pollinated flowers were pollinated by insects such as beetles, so the syndrome of insect pollination was well established before bees first appeared. The advantage is that bees are specialized as pollinating insects, with behavioural and physical modifications that specifically enhance pollination and they are much more efficient at the task than beetles, flies, butterflies, pollen wasps, or any other pollinating insect.

Bees, like ants, are essentially a highly specialized form of wasp. While the first definite fossil bees date from only forty million years ago, there is genetic and partial fossil evidence that they evolved alongside flowers, at least 140 million years ago. 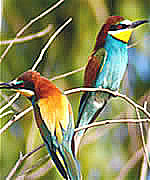 Bees are the favourite meal of ‘Merops apiaster’, a bird actually called a ‘Bee-Eater’. Bee-Eaters are mainly found in Africa and can be recognised by their bright colored plumage, slender bodies and usually elongated central tail feathers. (see photo left). Before eating its meal, a bee-eater removes the sting by repeatedly hitting the insect on a hard surface. Other common predators of bees are kingbirds, mockingbirds and dragonflies.

Visiting flowers can be a dangerous occupation. Many assassin bugs and crab spiders hide in flowers to capture unwary bees. Other bees are lost to birds in flight (see above). Insecticides used on blooming plants can kill large numbers of bees, both by direct poisoning and by contamination of their food supply.

Among solitary and primitively social bees, however, lifetime reproduction is among the lowest of all insects, as it is not uncommon for females of such species to produce fewer than 25 offspring.

Despite their painful sting and the typical attitude of insects as annoying or disgusting pests, humans hold bees in high regard. This is most likely due to their usefulness towards man, their social nature, as well as their diligence. Although a bee sting can be deadly to some, bees are generally regarded as non-agressive insects if left alone. The phrase ‘busy as a bee’ reflects their gentle, hard-working nature.