You are here: Home / Animals / Beetle 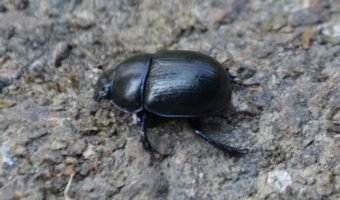 There are probably more species of beetle on this earth than there are species of plants. Beetles have the ability to adapt to any kind of environment which guarantees an extremely long existence. They appear in every corner of the world, in every kind of habitat but are not known to occur in the sea or in the polar regions. Beetles belong to the order ‘Coleoptera’, pronounced ‘co-le-op-ter-a’. This is the largest order of species in the animal kingdom, even larger than ants! Coleoptera come in all different shapes, sizes and colors.

There are about 350,000 named species of beetle in the world and many more species that remain unnamed and undiscovered. Forty percent of all described insect species are beetles and new species are frequently being discovered. Estimates put the total number of species, described and undescribed, at between 5 and 8 million.

The body of a Coleoptera is similar to that of other insects and consists of three main parts: Head, Thorax and Abdomen (see Beetle Anatomy).

Beetles interact with their ecosystems in several ways. They often feed on plants and fungi, break down animal and plant debris and eat other invertebrates. Some species are prey of various animals including birds and mammals.

One of the most important features of Coleoptera is their ‘elytra’, the hard exoskeletal which covers their wings. The ‘elytra’ helps to protect the beetle but also has many other functions too. Some beetles trap moisture in their wings and the elytra protects it from drying in heat and wind, this means the beetles can travel across arid deserts without dehydrating.

Other Coleoptera can live under water because they can store air in their wings, which is again protected by the elytra. Coleoptera (beetles) are most probably the most versatile creatures on earth. The beetles exoskeleton is made up of numerous plates called sclerites (a hardened body part), separated by thin sutures. This design creates the armoured defenses of the beetle while maintaining flexibility.

The elytra are not used for flight, but tend to cover the hind part of the body and protect the second pair of wings. The elytra must be raised in order to move the hind flight wings. A beetles flight wings are crossed with veins and are folded after landing, often along these veins, and are stored below the elytra.

The photograph below shows the Elytra lifted to expose the hind wings beneath.  The Elytra is a hard covering which protects the delicate wings underneath it. 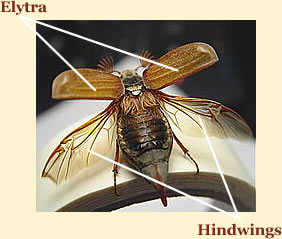 In some beetles, the ability to fly has been lost. These include the ground beetles (family Carabidae) and some ‘true weevils‘ (family Curculionidae), but also some desert and cave-dwelling species of other families. Many of these species have the two elytra fused together, forming a solid shield over the abdomen. In a few beetle families, both the ability to fly and the elytra have been lost, with the best known example being the glow-worms of the family Phengodidae, in which the females are larviform (where the females in the adult stage of metamorphosis resemble the larvae to various degrees) throughout their lives.

Where did the Beetle get its name?

The name ‘Coleoptera’ was first used by Aristotle in the fourth century B.C., more than 5,000 years ago! It comes from the Greek words ‘koleos’ which means sheath (or shield), and ‘ptera’ which means wings.

The name refers to the beetles hardened front wings, the ‘elytra’, which covers the folded hind wings like a sheath. Insects in the order ‘Coleoptera’ are commonly called ‘beetles’. The common name ‘beetle’ comes from older English words for a ‘little biter’.

Larvae of some species of Coleoptera are called grubs, wireworms and rootworms.

Where Do Beetles Live? (Beetle Habitats)

Beetles do not really mind where they live – they can live just about anywhere. Beetles can be found in almost all habitats, but are not known to occur in the sea or in the polar regions such as the Arctic and Antarctic. They interact with their ecosystems in several ways.

They often feed on plants and fungi, break down animal and plant debris and eat other invertebrates (any animal without a spinal column). Some species prey on various animals including birds and mammals.

Certain species are agricultural pests, such as the Colorado potato beetle, the boll weevil, the red flour beetle and the mungbean or cowpea beetle, while other species of beetles are important controls of agricultural pests. For example, ladybirds consume aphids, scale insects (parasites of plants), thrips (insect species that feed on a large variety of plants and animals by puncturing them and sucking up the contents) and other plant-sucking insects that damage crops.

Beetles can be found in many land and freshwater habitats.

logs, under bark, in caves, in fungi, in mud, in decaying plant and animal matter, in water, in stored food, in bird and mammal nests and in termite nests.

Some species even live in ant nests and feed of the larvae.

Beetles can also be found anywhere particularly where food is especially dried foods like grains, nuts, cereals and flour in such places as warehouses, bakeries and and grain stores.

Here is a beetle trying to make his home in a mushroom! 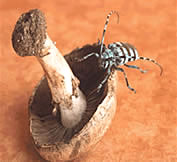