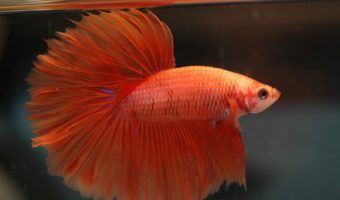 Betta Fish are found mainly in the southern parts of South-East Asia, and are in abundance in Vietnam, Thailand and Cambodia. It thrives in the wild especially in reedy ponds, slow moving creeks and rivers. It also can be found in shallow waters such as stagnant ponds, rice paddies and many times in highway drains and low level catchment areas.

Considered to be the most beautiful of all tropical fish, Betta Fish get their name because of their aggressiveness towards other males. They’re also aggressive in nature because they have to survive in small bodies of water, and therefore tend to fiercely protect their area (where they live) or they’ll lose out on breeding with a female to a more dominant male.

People have been breeding Betta Fish for thousands of years in Vietnam. In places like Thailand for example… they even breed these fish to fight to their death. However, it’s the Betta Fish which are bred as ornamental types that are usually MUCH prettier than the ones bred for fighting. It’s illegal to breed Betta Fish for fighting in most parts of the world. But in areas of asia people still place bets on fights between two aggressive males.

A sad fact is: The male which continually attacks the other male long after it’s given up is called the winner.

Despite their abundance as pets, B. splendens is listed as “vulnerable” by the IUCN, due to increasing pollution and habitat destruction.

In their natural environment Betta Fish are generally brownish or even silver in color with highlights of red or even bright green stripes and patches. These types are not considered nearly as pretty as the ones that are bred with much smaller fins. Pet shops usually carry the ornamental types which are more striking in color and appearance. This is especially so when compared to Betta Fish which are bred for fighting. They say that it’s the color in their hues and their flowing fins why they’re known as Betta splendens or the “splendid betta fish”. Betta Fish need regular care. They have a truly unique feature which sets them apart from a lot of other types of tiny fish. These fish can breathe both through their gills and through a special organ called the “labyrinthine” allowing them to absorb pure oxygen when there’s a limited supply of oxygen in its water environment.

The Beautiful Colors Of Betta Fish

These pretty ornamental fish come in about every color you could imagine. Sometimes in solid colors, half-colors know as “butterfly”, and colors like marble and piebald. In the animal kingdom males are usually more colorful than females. It’s NO different when it comes to Betta Fish. The male is more colorful, and with larger flowing fins. The colors on the males help them display strength against other rival males. A male Betta Fish is somewhat different in the shape of their tails than females. Generally rounder in appearance than females. Males have single tails, double tails, fringed tails and even veil tails. Betta Fish are oftentimes bright iridescent all over. But depending on the area the male can also be only partially iridescent or even a dull matte color.

Oftentimes the brighter white Betta Fish that once was thought to be a totally different type of fish was called “Betta cambodia”. However, later it was classed as only a color variation in its type. Today you can still hear Betta Fish referred to as Cambodia. But it’s mainly used in conjunction with fish with bright white bodies and pigmented colored fins and eyes.

Betta Fish can pick-up a number of common diseases like dropsy and fin rot. In most cases it’s more or less associated with the quality of their water environment. In a domestic tank environment there’s special medicines available such as “Bettafix” which is great for aquarium fish like Betta Fish. Betta Fish will live in small bowls and tanks but it’s not advised. Betta Fish kept in small glass jars and modern plastic containers have much less of a survival chance than a fish living in at least 3 to 5 gallons of water. It’s always best though to keep Betta Fish in separate containers unless you are thinking about breeding. Another thing to watch out for is trying to put different varieties of tropical fish in a single bowl or tank. Why? Because long finned, reddish colored tropical fish almost always will pick-on Betta Fish. Tropical fish such as… “tiger barbs, serpae, and even tetras” tend to attack their long flowing fin.

As a carnivorous fish they should be fed commercial fish food, special “Betta Pellets” or frozen tubifex worms. Fresh bloodworms and mosquito wrigglers also make a tasty treat for them. As water temperature drops, their metabolism slows down and you need to feed them less often. However, during the warmer summer months you should feed them a small amount of food on a daily basis.

What Is The Life Expectancy Of Betta Fish?

In their natural environment Betta Fish will survive perhaps only a year or two at the very most. However, when they’re bred in captivity (and are properly looked after) you can expect a pet Betta Fish to live anywhere up to 2 to 4 years of age. As a general rule of thumb: the prettier the specimen is, usually the much shorter lifespan it has. Another thing to remember is that female Betta Fish are more prone to disease than the male. So, females live a much shorter life especially when their not looked after well. Expect to pay anywhere from $3.00 to upwards of $25.00 for the most beautiful and spectacularly iridescent of specimens.

When it comes to buying glass bowl or tank expect to pay anywhere from $25 to $150. Betta Fish are freshwater tropical fish that thrive in shallow waters, and in warmer temperatures around the 30 degrees mark. Nevertheless, if you live in a more temperate climate, then you’ll need to add a quality aquarium heater to your tank. Especially if the water temperature tends to fall below the 18 degrees mark. Betta Fish can survive in poorer quality water conditions but to enjoy a happy, healthy and lively pet fish you should change its water frequently. These gorgeous long fin beauties really do need their water changed at least “one to three” times a week.

If you put your pet Betta Fish in a small bowl you will need to change the water every few days. Anyone can own a Betta Fish. They’re an especially good pet to have as a first-time pet owner or somebody that has very little time or space in their lives for a regular size pet say like a cat or dog.