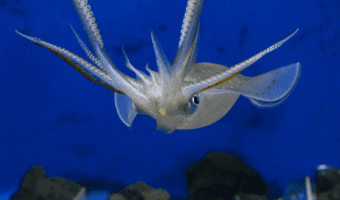 The bigfin reef squid (Sepioteuthis lessoniana), also known as glitter squid or oval squid, is a species of loliginid squid. It is one of the three currently recognized species belonging to the genus Sepioteuthis. They are generally found in Indo-West Pacific waters and are characterised by a large oval fin that extends along their mantle, giving them a similar appearance to cuttlefish.

Bigfin reef squids have the fastest recorded growth rates of any large marine invertebrate, reaching 600 g (1.3 lb) in only four months, but have a very short lifespan of less than a year. They feed mainly on crustaceans and small fish.

These squid are fished extensively for human consumption in Asia. However, they are not found on any threatened or endangered species list. Their robust population and wide distribution makes it unlikely that it will become a threatened species in the near future. 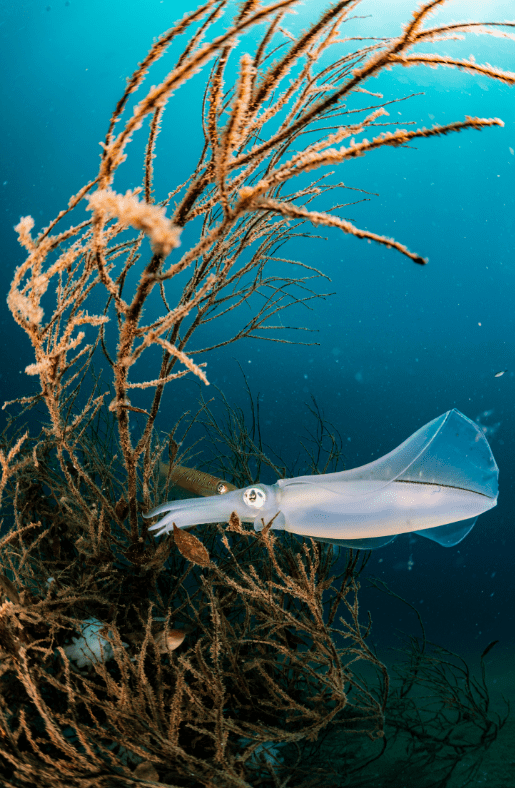 Squid species have complex eyes that are capable of focusing and forming clear images. The pupils are adjustable, based on the amount of light entering the eye. They have eight arms (not generally of identical length) and two tentacles that are attached to the bottom portion of the head. The tentacles are primarily used for the capture of prey. Each of the arms is lined with toothed suction cups for manipulating prey, and the two tentacles possess toothed suction cups at their distal end.

Like all squid, the bigfin reef squid has an ink sac, which can release a dark cloud of ink to disorient predators.

The mouth area is supported by seven triangular flaps (buccal lappets), each with 0 to 7 suckers of less than 0.2 mm in diameter and 18 to 25 teeth. The strong, curved, and short beaks (rostra) are mostly black to dark brown. The radula has seven rows of teeth.

Bigfin squid range in color from translucent creamy white through pale yellow to brownish pink and brownish violet. They are able to change their color and pattern through voluntary control of chromatophores.

Bigfin reef squid typically complete their entire life cycle within 4 to 6 months of birth, and therefore have a lifespan of around 315 days. The temperature of the water they reside in my affect rates of growth and sexual maturation in squid. The warmer the water, the shorter the lifespan of these squid.

Bigfin reef squid are active at night, and will move to deeper waters or find cover in daytime.

Newly hatched young will swim in shoals and can interact with one another to increase chances of survival, by warning each other of predators and helping one another find food sources. However, as the squid get older, they tend to become more solitary.

However, during the mating season, mature squid once again form shoals and participate in a number of social interactions, including displays of dominance, courting, territorial behavior, and signaling the presence of predators.

Bigfin reef squid communicate with one another by using rapid, vivid changes in its body color pattern to convey information about potential threats, food sources, or dominance. They also communicate through chasing or biting of other individuals. They do not possess any specialized organs for sound detection or production (although vibrations are perceived), instead relying upon their highly developed sense of sight for communication and perception of their environment. 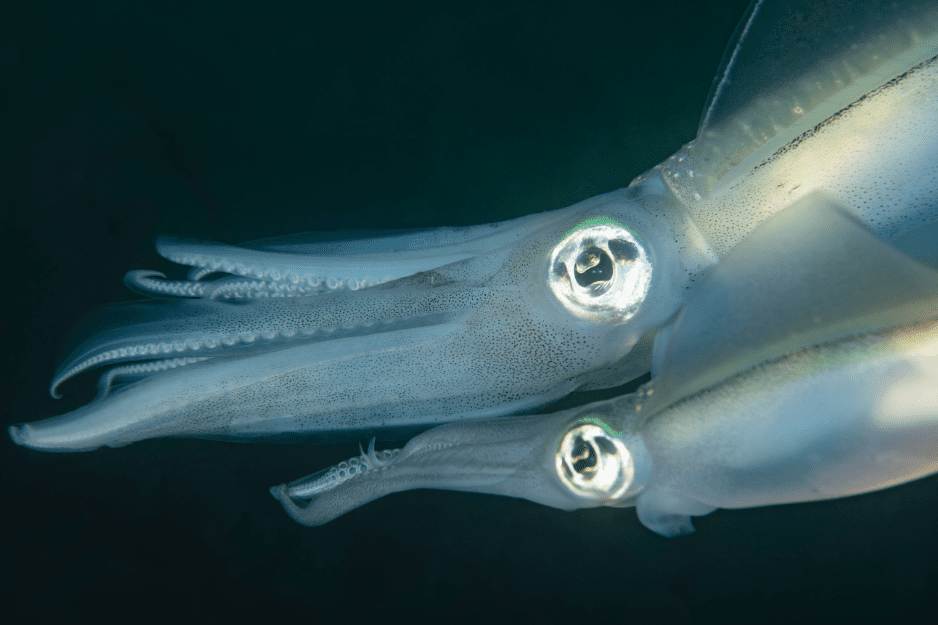 Elaborate breeding behaviors are known in this species, which largely involve the display of complex body patterns during courtship. Male oval squid use a “Stripe” pattern and a “Flicker” display, while females show a display known as the sexual “Saddle”.

Mating can occur in two different ways: “head-to-head” or “male-parallel” mating. In “head-to-head” mating, the male swims upside down and lunges forward towards the female, having already ejected several spermatophores from his funnel onto his hectocotyli, which he attempts to deposit into the female’s mouth funnel. The female will then transfer the spermatophores to her oviduct for fertilization.

“Male-parallel” mating involves the male and female swimming side by side. The male then moves below the female, clasps her neck with his arms, and inserts his hectocotylus into the mantle cavity of the female, attaching the spermatophores at the opening of the oviduct.

Once copulation has ended, females release 20 to 1180 eggs per individual, in egg capsules that contain up to 13 eggs each. They can lay eggs year round and the onset of the major spawning season can vary by location. In warmer waters, such as around India, spawning can occur as early as January while in cooler waters near Japan, spawning can begin as late as September.

The egg capsules are laid in single straight strands on rocks, corals, plants, submerged branches, and other surfaces along shore lines. The eggs are 3 mm (0.12 in) in diameter and the egg capsules about 58.2 mm (2.29 in) in length and 12.6 mm (0.50 in) in width, on average. Females coat the eggs in a gelatinous substance, forming an egg capsule that offers protection and nourishment while the egg develops. Paired males often remain with the females for protection while the eggs are being laid, but this is only temporary.

Once the female lays eggs, her body deteriorates and she usually dies before she can mate again. However, males can usually mate with several more females before he dies.

The eggs have a gestation period of between 15 and 22 days, depending on the temperature. Once hacthed, the baby bigfin reef squid are about 4.5 to 6.5 mm in mantle length (excluding tentacles), with fully functioning fins and ink sacs. There is no parental care, but they are already strong swimmers.

Bigfin reef squid have one of the fastest recorded growth rates for any large marine invertebrate. They can reach 600 g (1.3 lb) in only four months.

The bigfin reef squid is the most widespread species in the genus Sepioteuthis. It is found in temperate and tropical regions of the Indian Ocean and the western Pacific Ocean, between northern Australia, New Zealand and Asia. They also occur as far north as the Mediterranean Sea and in eastern portions of the Pacific Ocean near the Hawaiian Islands.

They like warm (typically 16°C to 34°C) coastal waters and at night, when they are most active, bigfin reef squid are usually found 0 to 100 m (0 to 328 ft) below the water’s surface. They tend to remain close to the shoreline, near rocks and reefs. During the day, they generally move to deeper waters or near any form of cover, such as floating driftwood, reefs, rocks, or grasses.

Bigfin reef squid have a large distribution and population. They are not considered to be endangered, and are very important for both commercial and ecosystem reasons. They adapt to warmer temperatures by laying more eggs, making them a good indicator species for climate change. This may mean that, as the temperature of the sea rises with climate change, the population of the bigfin reef squid will increase.

These squid are widely consumed as human food and are usually caught in large numbers by trawling, seine fishing, or fixed net traps. Since they are not a seasonal species, they can be fished throughout the year.

They are used not only for food, but also as bait for many other species. Since bigfin reef squid have a rapid growth rate, short life span, low rates of disease, low rates of cannibalism, and tolerance to handling and captivity, they are commonly observed and raised in labs. For these reasons, they are also thought to be one of the most promising species for mariculture.

The main predators of bigfin reef squid are tuna, marlin, swordfish, blue-fin, sharks and whales. They are most vulnerable to predation during larval stages. Squid hatchlings are often cannibalistic, which is one of the main sources of predation on young squid.

Bigfin reef squid rely on camouflage to hide from predators and change their coloration based on their surroundings using their chromatophores. The ink produced by threatened squid can cause predators to lose their sight and sense of smell, due to the color and alkalinity of the ink.