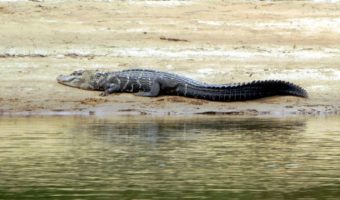 The Black Caiman is found in various freshwater habitats such as slow-moving rivers, streams, lakes, flooded savannahs and wetlands.

The Black Caimans general appearance is similar to the American Alligator (Alligator mississippiensis). As their common name suggests, Black Caimans have a dark coloration. 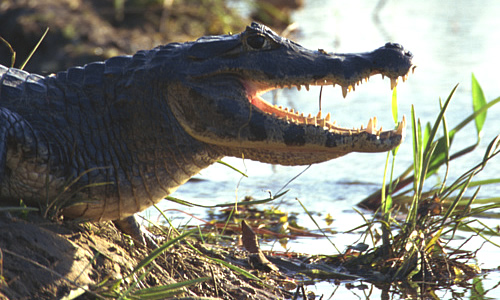 A Black Caimans lower jaw has grey banding (brown in older animals) and pale yellow or white bands are present across their flanks of the body, although these are more prominent in juveniles. This banding fades only gradually as the animal matures. The Black Caiman has a bony ridge over red eyes and black, scaly skin. A Black Caimans skin coloration helps with camouflage during its nocturnal hunts, but may also help absorb heat.

The Black Caimans eat fish, including piranha fish and catfish and other animals, including birds, turtles and land-dwelling animals like the capybara (Hydrochaeris hydrochaeris) and deer when they come to the waters edge to drink.

Larger specimens can take tapirs and anacondas. Their teeth are designed to grab but not rip, so they swallow their food whole after drowning it.

Juveniles eat crustaceans and insects before moving onto larger, terrestrial prey. Healthy adult black caimans have no predators other than humans and Jaguars and are one of the apex predators (predators that, as adults, are not normally preyed upon in the wild in significant parts of their range by creatures not of their own species) in their habitat. Their main predator is humans, who hunt them for leather or meat.

The female Black Caiman constructs a mound nest (1.5 metre in diameter) during the dry season into which 30 to 65 eggs are laid. Nests can be found in both concealed and open locations. Females remain close to their nests.

Once the eggs are ready to hatch, she will open the nest and assist in the hatching process. Hatching is reported to occur between 42 and 90 days, coinciding with the beginning of the wet season.

As many females often nest within close proximity, the number of hatchlings in one area can be high. This leads to safety in numbers. Black Caimans sometimes eat their young.

Population recovery today is threatened by both continued illegal hunting and through increased competition with the more numerous Common Caiman (Caiman crocodilus).

This latter species has moved into areas once inhabited by the Black Caiman and proliferated due to its increased reproductive capacity.

Hunters can take both of these species with ease. Habitat destruction through deforestation and burning of swamplands (French Guiana) continues the onslaught.