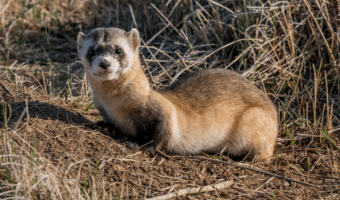 The black footed ferret (Mustela nigripes), also known as the American polecat or prairie dog hunter, is a species of mustelid belonging to the Mustelidae and the genus Mustela. The black-footed ferret is similar in appearance to the European polecat and the Asian steppe polecat.

The black-footed ferret is native to central North America and are the only native species of ferrets native to North America. The domestic ferrets that you find in pet stores (Mustela furo) share the same genus, but these are of European origin and have been domesticated for hundreds of years.

This north American ferret feeds primarily on prairie dogs and the decline in prairie dog populations is thought to have been the cause of the decline in black-footed ferret populations throughout the 20th century. In fact, the species was declared extinct in 1979, but a residual wild population was discovered in Meeteetse, Wyoming in 1981. Since then, a captive breeding program was created, helping to reintroduce the black-footed ferret into the wild.

While the numbers of these animals has increased greatly in recent years, they are still listed as an endangered species on the IUCN Red List. 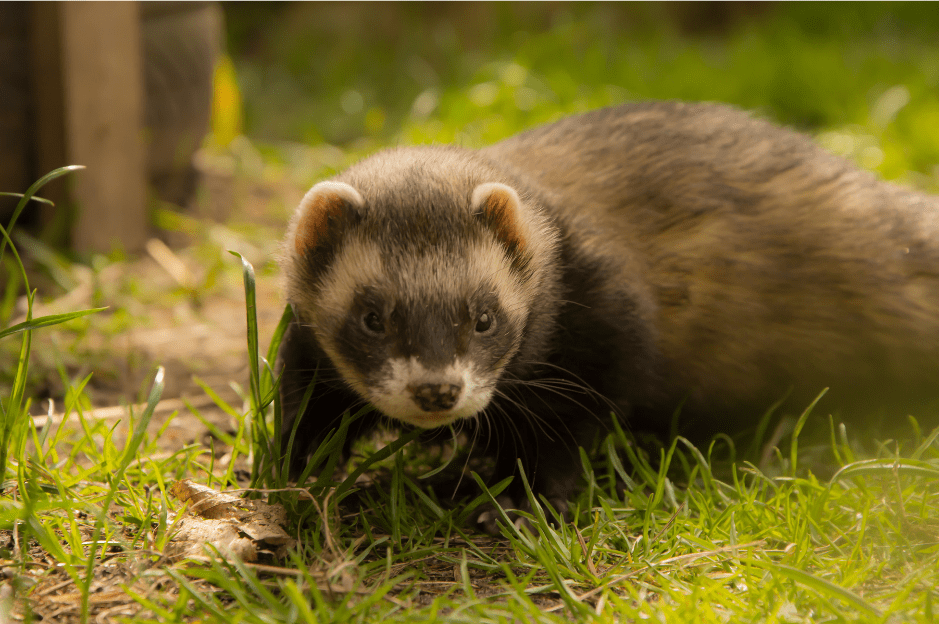 Black footed ferrets have a distinct appearance with sooty black outlines on their feet, ears, parts of the face and its tail. Their base color is pale yellowish or buffy above and below and the top of the head and sometimes the neck is clouded by dark-tipped hairs. A black mask can be seen around the eyes, which is well defined in young black-footed ferrets.

They have short and stout legs and a long neck, with the forehead being arched and broad, and the muzzle short. Their feet, including the soles, are covered in hair, and this conceals the claws, which are very sharp and slightly arched.

The average lifespan of the black-footed ferret is thought to be around one year in the wild, although it could be up to five years. The main causes of death in these animals are habitat loss, human-introduced diseases, and indirect poisoning from prairie dog control measures.

Black footed ferrets are carnivores and feed primarily on prairie dogs, with up to 90% of their diet comprised of them. One ferret may eat over 100 prairie dogs in a year! The other 10% of their diet is made up of small rodents, such as mice and ground squirrels. They get all their water from their prey.

They typically consume between 50 to 70 grams of meat per day. They only kill enough to eat, and very rarely store food for later. They hunt and kill prairie dogs in their burrows. 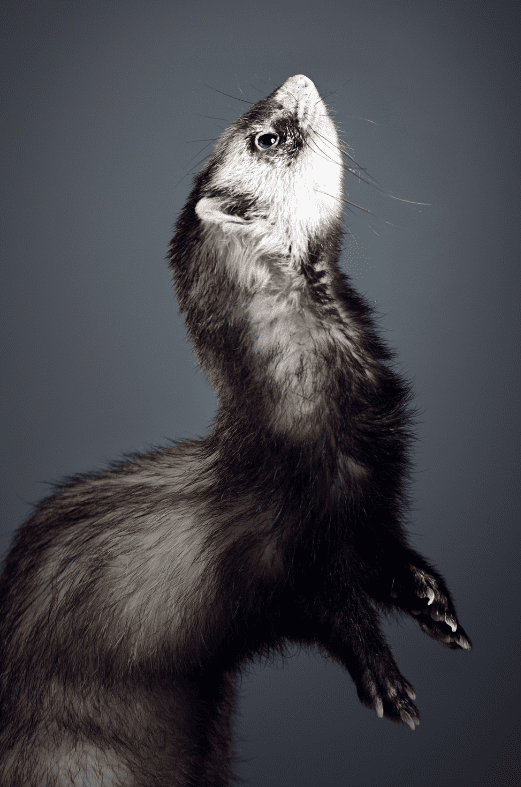 The black footed ferret is a solitary animal, except during the breeding season or when females are caring for young. They are primarily nocturnal and spend most of their time underground in prairie dog burrows, which is where they sleep, catch their food, escape from predators and harsh weather, and give birth to their young.

They dot hibernate but in winter, the amount of time they are active and the distances they travel decrease substantially. They have been found to remain underground in the same burrow system for a week at a time in winter.

The rest of the year, they typically spend only a few minutes above ground each day during the first few hours following sunrise to hunt or find new burrows or mates. Males are generally more active than females, travelling about twice the distance that females do.

Black-footed ferrets are also territorial and will actively defend territories against other same-sex competitors.

Black-footed ferrets are very playful, especially as juveniles. Young at play will wrestle, arch their backs and hop backward with their mouths wide open, in a display known as the “ferret dance.”

These animals are very vocal. They use a loud chatter as an alarm call, hissing to show agitation or fear, and females use whimpering sounds to encourage the young to follow.

The breeding season of the black-footed ferret is through March and April. Black-footed ferrets exhibit delayed implantation, in which the fertilized egg does not start developing until conditions are appropriate for gestation.

The gestation period is 35 to 45 days, after which a litter of 1 to 6 young are born, although the average litter size is around 3 kits. Their dark markings appear at about 3 weeks of age and young kits begin to open their eyes about 35 days after birth. Black-footed ferret kits develop very rapidly and become increasingly active after their eyes open. They remain in the burrow underground for about 42 days, and will stay with their mothers throughout the summer before separating in the fall.

Ferrets become sexually mature at 1 year of age, and their peak reproductive period is at about 3 to 4 years.

The black footed ferret is native to North America and is the only ferret native to these parts. Today, they exists in the wild in three locations, northeastern Montana, western South Dakota, and southeastern Wyoming. All three locations are sites where they have been reintroduced after the original populations were extirpated.

They primarily live in the short or middle grass prairies and rolling hills, and need around 100-120 acres of space for food sources. They live where there are prairie dog colonies and use prairie dog burrows for raising young, avoiding predators, and thermal cover. 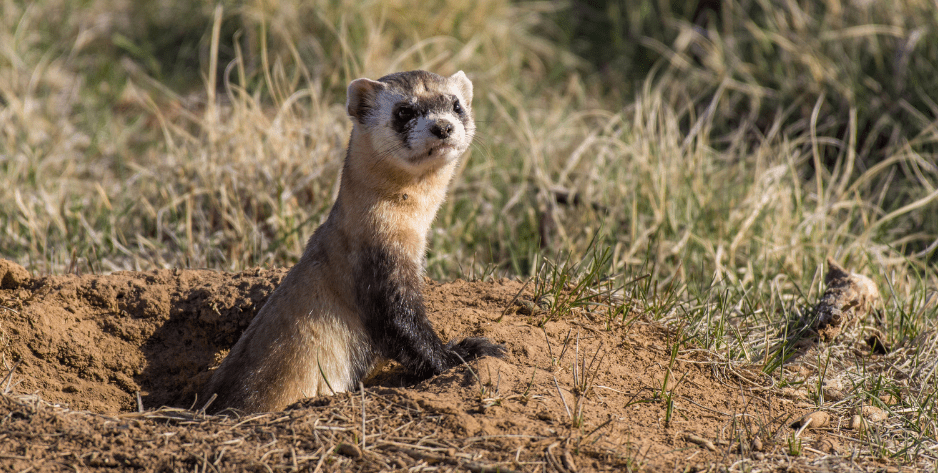 Black-footed ferrets declined in population throughout the 20th century. This was due to decreases in prairie dog populations and the sylvatic plague. They were also harvested for the fur trade. They were listed as endangered by the United States Fish and Wildlife Service (USFWS) in 1967, and declared extinct in 1979, a residual wild population was discovered in Meeteetse, Wyoming, in 1981.

This wild population was then bred in captivity and resulted in the reintroduction of black-footed ferrets into eight western US states, Canada, and Mexico from 1991 to 2009. They are now listed as Endangered on the IUCN Red List. Despite conservation efforts, unfortunately, without ample reintroduction sites and protection from plague, full black-footed ferret recovery remains difficult.

Some common causes of death of the black-footed ferret include habitat loss, human-introduced diseases, and indirect poisoning from prairie dog control measures.

Diseases that can kill black-footed ferrets include rabies, tularemia, and human influenza, but they are also susceptible to canine distemper virus, introduced by striped skunks, common raccoons, red foxes, coyotes, and American badgers.

They are also susceptible to colder weather, with 50 to 70% of juveniles and older black-footed ferrets not making it through the fall and winter.

However, the biggest threat to these animals is the decline in prairie dog populations and loss of prairie dog habitats. Habitat loss results from agriculture, livestock use, and other development. Loss of these areas can also be down to oil and natural gas exploration and extraction.