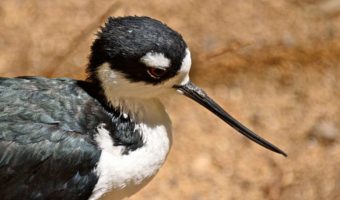 The Black Necked Stilt (Himantopus mexicanus), is a large wader in the avocet and stilt family, Recurvirostridae. Black necked stilts are dark-backed shorebirds with white underparts and long, straight bills. They are abundant on the wetlands and coastlines of the Americas, and can be found from the coastal areas of California through much of the interior western United States and along the Gulf of Mexico as far east as Florida, then south through Central America and the Caribbean to Ecuador and the Galápagos Islands. Some populations of black necked stilt are migratory birds and move to the ocean coasts in winter.

These birds have a healthy population and a large range. Despite the fact that North American populations of the black-necked stilt have somewhat declined in the 20th century, they are listed as Least Concern by the IUCN Red List. 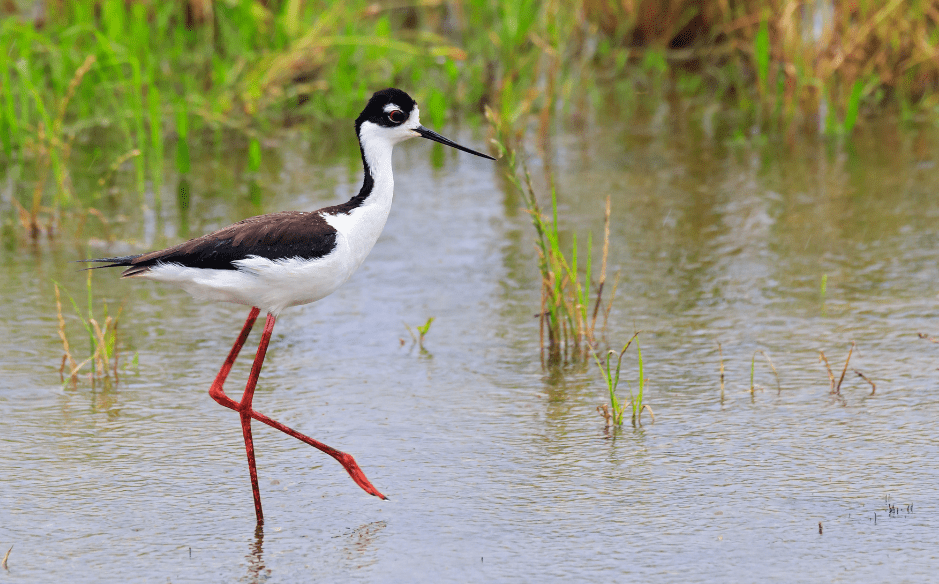 Females tend to have browner backs, while males are more black. The color of the back extends up the hindneck to the top of the head, forming a cap that comes just below the eye. In the black cap, just above the eye, there is a white spot, which is helpful in distinguishing it from other species of stilts. Males have a greenish gloss to their back and wings in breeding season.

The distinguishing feature of all birds in the stilt family is extremely long, stilt-like legs, which are reddish in color and about 8 – 10 inches long. The legs of the black necked stilt are longer in proportion to their bodies than any other bird except the Flamingo. These long legs are very well adapted for wading in shallow water and foraging for food. The black necked stilts front toes are long and slightly webbed at the base, with no hind toe.

The black necked stilt has a lifespan of around 20 years.

They forage in shallow water, usually wading, but are capable of swimming if they need to. They also forage in mudflats and lakeshores, and have to bend their legs in order to reach the ground with their beaks. They locate their prey by sight and snap it up quickly, using their long slender beaks to probe for food in the mud and sand. Sometimes they completely submerge their head underwater, swiping their head and bill through the water. 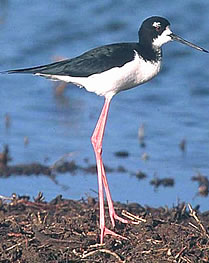 The black necked stilt is found around Atlantic and Pacific coasts, some inland states, the Gulf Coast region, Mexico, South America, West Indies, and Hawaii. They breed along both coasts of the United States, from Oregon and Delaware southward, and locally in western interior states east to Idaho, Kansas, and Texas. They winter along the Pacific Coast north to central California and also in Florida and other Gulf Coast states. The northernmost inland populations winter in South America (Brazil and Peru), the West Indies, the Galapagos Islands, and along the Atlantic and Pacific coasts to southern Mexico, the Baja Peninsula and Hawaii.

Black-necked stilts are gregarious and roosting is small groups. They are very territorial and will defend a large area, working cooperatively with their neighbors. They patrol for predators and males are more aggressive, uttering a sharp alarm call, mobbing, and flying low over intruders, including people. They have an anti-predator display called “the popcorn display” in which a group of adults will encircle a ground predator and hop side to side while flapping their wings. Their sound is a sharp yipping and is continuous if disturbed.

When there is danger of over-heating in hot climates, the black necked stilts have a technique called “belly-soaking” which is the transport of water in the ventral feathers.

Black necked stilts are a migratory species. During March to May, those wintering in southern climes migrate in flocks of about 15 to their northern or inland breeding grounds. Those summering in northeast California and southeastern Oregon migrate to lowland and coastal areas.

After the breeding season, from August to September, juveniles gather in small groups before leaving the breeding grounds. The most northern breeders will make a long migration, stopping along the way for food, in fields, marshes, wetlands, and mudflats, to winter in Brazil, Peru, the West Indies, the southern coasts of the Atlantic and Pacific in the US, Mexico, and Hawaii.

During October to February, feeding takes place on their wintering grounds (e.g., Brazil, Peru, the West Indies, the southern coasts of the Atlantic and Pacific in the US, Mexico, and Hawaii). For feeding areas they prefer coastal estuaries, salt ponds, lakeshores, alkali flats and even flooded fields. 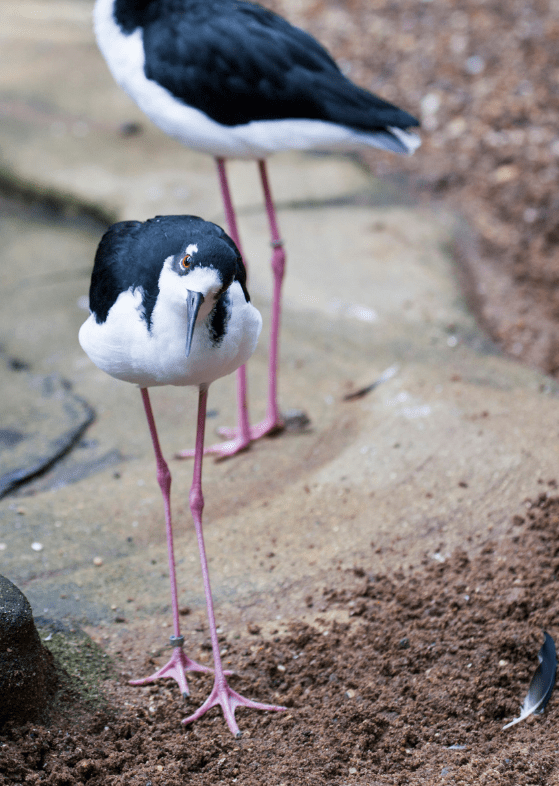 Reproduction occurs from late April through August in North America, with peak activity in June while tropical populations usually breed after the rainy season. Pairs form on wintering grounds, during migration, or on the breeding grounds, and remain monogamous for a single breeding season. For roosting and resting needs, this bird selects alkali flats (even flooded ones), lake shores, and islands surrounded by shallow water. Both sexes choose the nest site.

Black necked stilts build their nests in both fresh and salt marshes and shallow coastal bays. The nests are typically sited within 1 km (0.62 mi) of a feeding location. The spacing between nests is approximately 65 ft (20 m). Their nests are quite shallow and built in the marshy ground, lined with grass, weeds, twigs, or shell fragments. The nest is scraped by either sex while the other sex watches.

Black necked stilts usually lay 3 to 5 buff colored eggs (44 mm (1.7 in long), which are spotted with brown. Both parents incubate the eggs for about 25 days. Once hatched, the young are capable of swimming after just two hours. The young black necked stilts are tended by both parents. The parents are extremely protective of their young and will fly at intruders or practice the crippled-bird act to draw predators away from their young.

The black necked stilt chicks look similar to the adults, but are light brownish grey with black spots and are very well camouflaged. When the adults give an alarm call, the chicks scatter and lay flat against the ground. The chicks are able to fly about 4 weeks after hatching. They breed at about 1 or 2 years old.

Overall, the population of the black necked stilt is healthy and occurs over a large range. They are listed as Least Concern by the IUCN Red List. However, the North American populations of the black necked stilt have somewhat declined in the 20th century, mainly due to conversion of habitat for human use and pollution affecting both the birds directly as well as their food stocks.

The Hawaiian stilt, which is sometimes considered a subspecies of the black necked stilt, is very rare and its numbers are less than 2,000 individuals.

The main predators of the black necked stilt are foxes, gulls, skunks, coyotes and birds of prey.