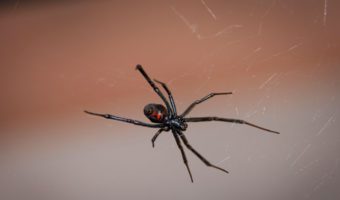 The Black Widow spider (Latrodectus spp.) is a spider notorious for its neurotoxic venom (a toxin that acts specifically on nerve cells).

The Black Widow Spider is a large widow spider found throughout the world and commonly associated with urban habitats or agricultural areas.

The name ‘black widow spider’ is most commonly used to refer to the three North American species best known for their dark coloration, black hair and red hourglass pattern.

Occasionally, it is applied to several other members of the Latrodectus (widow spider) genus in which there are 31 recognized species including the Australian red-back, brown widow spider (sometimes called the grey widow) and the red widow spider. In South Africa, widow spiders are also known as the ‘button spiders’. 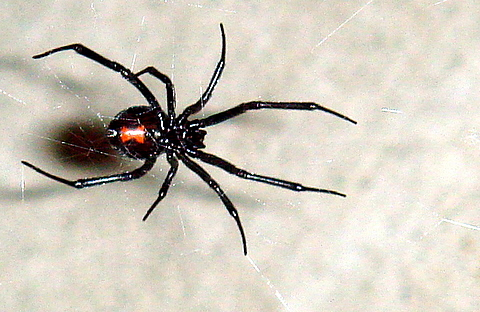 Female black widow spiders are shiny black when full grown. Since the females commonly eat their mate after mating (as do many other spiders) they often are actually ‘widows’. This is probably how they got their name. Black Widow Spiders have an hourglass shaped marking on the underside of their abdomen which, although most commonly red, may range in color from white to yellow to various shades of orange and red. Black Widow Spiders also have a small, usually red colored dot near the spinnerets, which is separate from the hourglass.

In the northern black widow spider (Latrodectus variolus), the two halves of the hourglass shape may be separated into two separate patches. A large female black widow spider can grow to about 1.5 inches (38 millimetres), including leg span. Their body measures about 0.5 – 0.6 inches (12 – 16 millimetres). Male black widow spiders are half the size of the female or even smaller. They have longer legs and a smaller abdomen in relation to their body size. They are also usually dark brown with varying colors of stripes or dots, with no hourglass mark. Adult males can be distinguished from juvenile females by their more-slender body, longer legs and large pedipalps (a second pair of appendages of the main body part) typical of most other male spiders.

As with many venomous creatures, the brightly colored markings serve as a warning to predators. Eating a black widow spider will not normally kill a small predator (birds), however, the sickness that follows digestion is enough for the creature to remember that the bright red marking means ‘do not eat’. Males bear similar marks to the females to serve as warning while they are searching for mates, however, the marks are not as prominent (not as brightly colored, or as large).

Male black widow spiders, being less venomous, are less of a threat to predators, therefore having less prominent but similar marks helps predators to better judge their prey (some large birds can eat male widows without adverse effect and so only avoid female spiders).

As is characteristic of all arthropods, black widow spiders have a hard exoskeleton composed of chitin and protein.

Black Widow spiders build loose and irregular mesh-type webs, often on plants, in loose stone or wood piles or in the corners of rooms, garages or outbuildings. They do not produce the symmetrical web typical of orb weaving spiders (Araneidae) or the distinctive funnel pattern web of the funnel weaver spiders (Agelenidae).

Black widow spiders typically prey on a variety of insects, however, they occasionally feed upon woodlice, diplopods, chilopods and other arachnids.

When the prey is entangled by the web, the spider quickly comes out of its retreat, wraps the prey securely in its strong web, then punctures and envenoms its prey. The venom takes about ten minutes to take effect. In the mean time, the prey is held tightly by the spider. When movements of the prey cease, digestive enzymes are released into the wound. The black widow spider then carries its prey back to its retreat before feeding.

When a Black Widow male is mature, he spins a sperm web, deposits semen on it and charges his palpi with the sperm. Black widow spiders reproduce sexually when the male inserts his palpus into the females spermathecal openings. The female deposits her eggs in a globular silken container in which they remain camouflaged and guarded. A female black widow spider can produce 4 to 9 egg sacs in one summer, each containing about 100 – 400 eggs. Usually, eggs incubate for 20 to 30 days.

Rarely do more than 100 spiderlings survive through this process. On average, 30 will survive through the first molting, due to cannibalism, lack of food, or lack of proper shelter. It takes 2 to 4 months for black widow spiders to mature enough to breed, however full maturation typically takes 6 to 9 months. The females can live for up to 5 years, while a males life span is much shorter.

Spiders bite, but they do not sting even though it sometimes feels like it has stung you. Compared to many other species of spiders, their chelicerae are not very large or powerful. In the case of a mature female, the hollow, needle shaped part of each chelicera, the part that penetrates the skin, is approximately 1.0 millimetres (around 0.04 inch) long, sufficiently long to inject the venom to a dangerous depth.

The males, being much smaller, can inject far less venom and inject it far less deeply. The actual amount injected, even by a mature female, is very small in physical volume. When this small amount of venom is diffused throughout the body of a healthy, mature human, it usually does not amount to a fatal dose (though it can produce the very unpleasant symptoms of latrodectism – the clinical syndrome caused by the neurotoxic venom). Deaths in healthy adults from black widow spider bites are relatively rare in terms of the number of bites per thousand people.

The bite itself can cause muscle and chest pain. The pain also may spread to the abdomen, producing cramping and nausea. Other general symptoms include: restlessness, anxiety, breathing and speech difficult, and sweating. Swelling may be noticed in extremities (hands and feet) and eyelids but rarely at the bite site. Often there is a general sense of discomfort shortly after the bite and acute symptoms increase in severity during the first day after a bite. Symptoms usually decline after two to three days however, some mild symptoms may continue for several weeks after recovery.