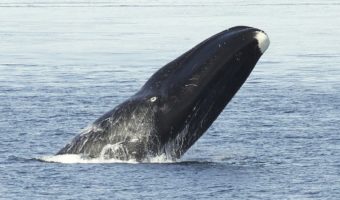 Bowhead whales have robust bodies. Bowhead whales are dark-colored whales with no dorsal fin and a strongly bowed lower jaw and narrow upper jaw. Their baleen plates exceed three metres and are the longest of the baleen whales. Baleen plates are used to strain tiny prey from the water. There are over 15 species of Baleen Whales that inhabit our oceans.

The scientific name for the Bowhead Whale is Balaena mysticetus.

Bowhead whales have massive bony skulls which they use to break from beneath the ice to breathe. Some hunters have reported whales surfacing through 60 centimetres (2 feet) of ice in this method.

Bowhead whales may reach lengths of up to 20 metres and females are larger than males. The blubber layer of whale flesh is thicker than in any other animal, averaging 43 – 50 centimetres (17 – 20 inches).

Bowhead whales are the only baleen whales that spend their entire lives in and around Arctic waters. The bowhead whales found off Alaska spend the winter months in the southwestern Bering Sea. They migrate northward in the spring, following openings in the pack ice, into the Chukchi and Beaufort seas, hunting krill and zooplankton.

Bowhead whales are slow swimmers and usually travel alone or in small herds of up to six animals. Although they may stay below the water surface for as long as forty minutes in a single dive, they are not thought to be deep divers.

Bowhead whales are highly vocal and use underwater sounds to communicate while traveling, feeding and socializing. Some Bowhead whales make long repetitive songs that may be mating displays.

The Bowhead whales behaviour can also include breaching, tail slapping and spy-hopping. Sexual activity occurs between pairs and in boisterous groups of several males and one or two females.

Breeding has been observed from March through August; conception is believed to occur primarily in March. Reproduction can begin when a whale is 10 to 15 years old. Female Bowhead whales produce a calf once every 3 to 4 years, after a 13 to 14 month gestation period. The newborn calf is about 4.5 metres long and approximately 1000 kilograms (2,200 pounds), growing to 9 metres by its first birthday.

The lifespan of a Bowhead whale was once thought to be 60 to 70 years, similar to other whales. However, discoveries of antique ivory spear points in living whales in 1993, 1995 and 1999 have triggered further research based on structures in the whales eye, leading to the reliable conclusion that at least some individuals have lived to be 150 – 200 years old (another report has said a female at the age of 90 was allegedly still reproductive).

Because of their possible life span, female bowhead whales are believed to go through menopause. Observations of very large animals without calves support this hypothesis.

Conservation Status of the Bowhead Whale

Bowhead whales have been killed for their blubber, meat, oil, bones and baleen. Century-old harpoons have been found embedded in some whales blubber, showing how old they can get and how they were attacked. Bowhead whales are closely related to the right whale and share with it the hunting-ideal characteristics of slow swimming and floating after death.

This level of killing (25 – 40 animals annually) is not expected to affect the populations recovery. The bowhead whale population off Alaskas coast (also called the Bering-Chukchi-Beaufort stock) appears to be recovering but remains at about 7,800 animals (1990), roughly 41 percent of the pre-whaling population.

The status of the other bowhead populations is less well known. These stocks are thought to be very small, probably in the low hundreds, for a possible worldwide population of 8,000 – 9,200 individuals.