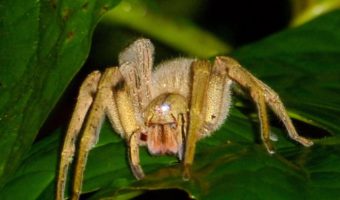 The Brazilian Wandering Spider (Phoneutria fera) is an aggressive and highly venomous spider. It was first discovered in Brazil hence its name. However, this genus is known to exist elsewhere in South and Central America.

The Brazilian Wandering spider appeared in the Guinness Book of World Records 2007 for being the most venomous animal.

In this particular genus, there are five known similar species whose members are also highly venomous. They include some of the relatively few species of spiders that present a threat to human beings. 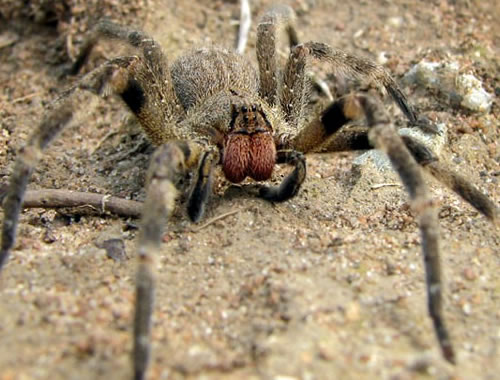 The Brazilian Wandering spider is so-called because it wanders the jungle floor, rather than residing in a lair or maintaining a web. This is another reason it is considered so dangerous. In densely populated areas, the Brazilian Wandering spider will usually search for cover and dark places to hide during daytime, leading it to hide within houses, clothes, cars, boots, boxes and log piles. This usually causes accidents when people disturb them.

The Brazilian Wandering spider is also called the ‘banana spider’ as it is occasionally found within shipments of bananas. As a result, any large spider appearing in a bunch of bananas should be treated with due care.

All spiders produce silk, a thin, strong protein strand extruded by the spider from spinnerets most commonly found on the end of the abdomen. Many species use it to trap insects in webs, although there are many species that hunt freely such as the Brazilian Wandering spider. Silk can be used to aid in climbing, form smooth walls for burrows, build egg sacs, wrap prey and temporarily hold sperm, among other applications.

Brazilian Wandering spiders reproduce by means of eggs, which are packed into silk bundles called egg sacs. The male spider must (in most cases) make a timely departure after mating to escape before the females normal predatory instincts return.

Mature male spiders have swollen bulbs on the end of their palps for this purpose and this is a useful way to identify whether the spider is male or female. Once the sperm is inside the female spider, she stores it in a chamber and only uses it during the egg-laying process, when the eggs come into contact with the male sperm for the first time and are fertilized. The Brazilian Wandering spiders life cycle is 1 – 2 years.

Bites from the Brazilian Wandering spider may result in only a couple of painful pinpricks to full-blown envenomed. In either case, people bitten by this spider or any Ctenid should seek immediate emergency treatment as the venom is possibly life threatening.

The Phoneutria fera and Phoneutria nigriventer (two species of wandering spider) are the two most commonly implicated as the most vicious and deadly of the Phoneutria spiders. The Phoneutria not only has a potent neurotoxin, but is reported to have one of the most excruciatingly painful envenoms of all spiders due to its high concentration of serotonin. They have the most active venom of any living spiders. One of their members, the Brazilian Huntsman, is thought to be the most venomous spider in the world. Brazilian wandering spiders are certainly dangerous and bite more people than any other spiders.

The Brazilian wandering spider appeared in the Guinness World Records 2012 as the most venomous spider in the world.