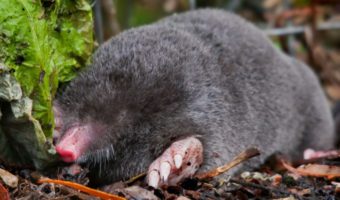 Moles (Talpa europaea) belong to the mammal family Talpidae. Moles are very common throughout Britain, however, they are rarely seen as they spend almost their entire life underground. The British Moles pre-breeding season population is estimated to be around 31,000,000.

Moles measure around 14 centimetres in length and have a 2.8 centimetre tail. Moles are built highly adapted for their underground digging way of life. A mole can dig its way through an amazing 14 metres of soil in just one hour.

Moles have a cylindrical body, very strong shoulders and broad, spade-like fore limbs with claws. Its pink snout is hairless and extremely sensitive.

A moles body is covered in a soft, thick, silver-black fur, which hides the small eyes. In some cases, moles eyes are quite covered with fur and skin. This state of the eyes is probably due to gradual reduction from disuse also aided perhaps by natural selection. Moles have no external ears and have very poor eyesight, however, they have instead, excellent senses of smell and touch.

The British moles preferred habitats are wooded hilly districts in the north and west of England, Wales and Scotland. A spherical ball located in the burrow in the centre of their territory is lined with dry grasses and leaves collected from the surface.

British Moles are carnivores feeding almost exclusively small invertebrate animals living underground such as earthworms and the larvae of beetles and flies.

A mole may also occasionally catch small mice at the entrance to its burrow. Because their saliva contains a toxin that can paralyze earthworms, moles are able to store their still living prey for later consumption. They construct special underground ‘larders’ for just this purpose. Researchers have discovered such larders with over a thousand earthworms in them. Before eating earthworms, moles pull them between their squeezed paws to force the collected earth and dirt out of the worms gut.

British Moles sleep, feed and breed in their tunnels. Moles occasionally appear above ground at the top of one of their characteristic molehills, and even then usually only the head and pink fleshy snout is revealed.

Moles have a well developed sense of orientation retaining a mental plan of their complex layout of underground tunnels.

The uniform texture of the fur allows it to lie in any direction, making it easier for the animal to reverse rapidly in the tunnels.

When the soil is shallow or subject to flooding, large molehills known as ‘fortresses’ may be formed. These fortresses can measure up to a metre in height and contain a nest chamber and several radial tunnels.

The moles tail is carried erect and the hairs on the tip give the mole information about its surroundings by brushing against the tunnel roof. Moles burrow in lawns, raising molehills and killing the lawn, for which they are sometimes considered pests. They can undermine plant roots, indirectly causing damage or death. Contrary to popular belief, moles do not eat plant roots.

Female moles give birth to one litter per year containing 2 – 7 young. Gestation period is 4 weeks. The young leave the mother when about 5 weeks old. The average life span of a mole is 2.5 years.

There is no conservation action targeted at this species.

Did you know - By the era of Early Modern English the mole was also known in the British Isles as 'mouldywarp'!