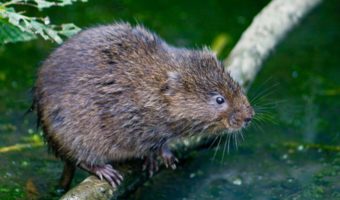 The European Water Vole (Arvicola amphibius) is a semi-aquatic mammal that resembles a rat. In fact, the water vole is often informally called the ‘water rat’. Water voles have rounder noses than rats, deep brown fur, chubby faces and short fuzzy ears and unlike the rat their tails, paws and ears are covered with hair. In the wild, they survive for 5 months on average, most do not survive a second winter. In captivity, they survive for a maximum of 5 years. 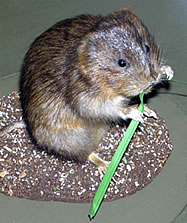 Water voles also live in reed beds where they will weave ball shaped nests if no suitable banks exist in which to burrow. In Europe and Russia, water voles may venture into woods, fields and gardens. Water voles live under the snow during the winter.

Water voles mainly eat grass and plants near the water. At times, they will also consume fruits, bulbs, twigs, buds and roots. In Europe, when there is enough food to last water voles a long time, water vole ‘plagues’ can take place. Water voles eat ravenously, destroying entire fields of grass and leaving the fields full of burrows, during these plagues.

Their mating period lasts from March into late autumn. The female voles gestation period lasts for approximately 21 days. Up to 8 baby voles can be born, each weighing around one fifth of an ounce. The young voles open their eyes three days after their birth. They are half the size of a full grown water vole by the time they are weaned.

The water vole population in the UK has fallen from its estimated pre-1960 level of around 8 million to 2.3 million in 1990 and to 354,000 in 1998. This represents a 90-95% loss. The water vole is still declining dramatically, the most recent estimate for 2004 is around 220,000. This decline is mainly caused by the American Mink, an aggressive predator of the vole, together with unsympathetic farming and watercourse management which destroyed parts of the water voles habitat.

Consequently, the water vole is the UK’s fastest declining mammal and efforts are under way to protect the water vole and its habitat from further destruction. Though much of the official focus on water vole conservation in the UK is on large areas of reed bed which support dense but localised and isolated populations, the largest areas supporting healthy populations of water voles are large conurbations such as Birmingham and London and some upland areas where American Mink are scarce. Across the UK the Wildlife Trusts are undertaking many practical projects to conserve and restore water vole populations.

Water voles have recently returned to Lindow Common nature reserve in Cheshire, UK, after many years of absence. The reserve rangers credit this to conservation management, which included thinning of woodland.

There are also indications that the water vole is increasing in numbers in UK areas where the European otter has made a return. The otter predates on the American Mink.