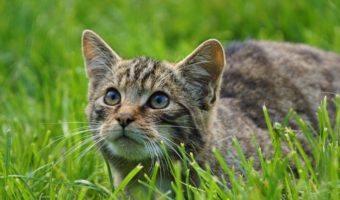 The Wild Cat (Felis silvestris) is Britain’s only wild member of the cat family and bears a close resemblance to the domestic tabby cat. Now confined to the Scottish highlands, wild cats disappeared from southern England in the 16th century, with the last one recorded in northern England being shot in 1849.

The Wildlife and Countryside Act gives strict legal protection to wild cats and their dens. Wild Cats are easily confused with ‘feral’ cats, which are domestic cats living wild and of which there are about 900,000 in Britain today.

Wild cat pre-breeding season population is estimated to be no more than 2,000. Some estimates are even lower and extinction is considered likely. 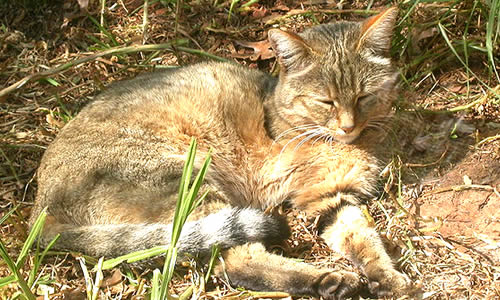 Wild cat fur is grey/brown in color with creamy underparts and dark stripes. The African subspecies tends to be a little smaller and a lighter brown in color.

As aforementioned, the wild cat closely resembles the domestic tabby cat, however, the wild cat is more striped and has a bushier, blunt-ended tail marked with thick black rings.

In its native environment, the Wild cat is adaptable to a variety of habitat types such as savanna, open forest and steppe. They also inhabit moor land, with pasture, scrub and forests in Scotland, north of Edinburgh and Glasgow, but not on the islands. In winter, bad weather drives them down into more sheltered wooded valleys

Wild cats make lairs in a foxes earth, under tree trunks, in hollow trees, in bracken or in a deserted buzzards nest.

The wild cat is an obligate carnivore, like all felines and consumes almost every part of any kill it makes; the coat providing roughage, the bones calcium and the meat everything else, in fact they rarely need to drink because meat has such a high water content. The Wildcat often carries parasitic worms in its gut and will eat long blades of grass to help clear out its system and probably also to obtain certain necessary acids not present in meat.

The wild cat is a hunter of small mammals, birds, rabbits, hares and game and other creatures of a similar size. They sometimes scavenge and cache prey to return to it later.

The Wild cat is extremely timid. It avoids approaching human settlements. The wild cat lives solitarily and holds a territory of about 3 kilometres squared. Males overlap ranges with females, however, females will not overlap ranges with other females.

Wildcats are mainly crepuscular (active during dawn and dusk). As is the case with all the smaller cats, wildcats cannot roar, however, they do use a variety of other sounds to communicate including growling, meowing, purring and hissing.

Wild cats mate in February and March and produce 1 litter of 3 – 5 kittens after a gestation period of 63 – 68 days. Kittens are born with hair but are blind and deaf. Their eyes open after 9 days and they emerge from the den at 4 – 5 weeks old. They accompany their mother on hunting trips after 10 – 12 weeks. Second litters occasionally occur in August. Wild cats have an average life span of 12 years.

The wild cat has suffered considerable decline in population and is now considered at serious risk of extinction in Britain. The Scottish wild cat is now a critically endangered species. The Mammals Trust UK claims the species say a revamp of current measures to protect and conserve the population could save them from dying out. They blame the wildcat decline on the intrusion of domestic cat genes into the population which has left only a few hundred pure animals in the wild.