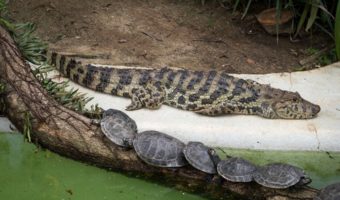 The Broad-Snouted Caiman (Caiman latirostris) has a distribution range including: Argentina (north), Bolivia, Brazil (southeast), Paraguay and Uruguay. The Broad-Snouted Caiman is a highly aquatic species which is found primarily in mangroves, marshes and swamps (freshwater and brackish) throughout its distribution, together with habitat associated with numerous small Atlantic river drainages. 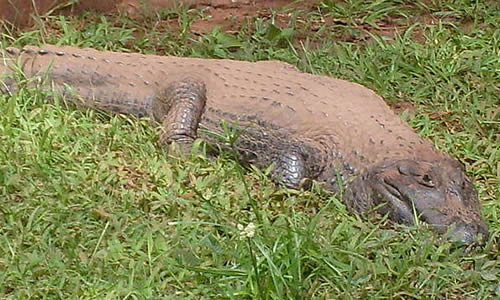 Both of the above species have a greater tolerance for colder conditions, given the latitudes (e.g. up to 600 metres) at which they occur. Their darker coloration is an adaptation to this, being designed to absorb more radiated heat.

The Broad-Snouted Caiman specialises in aquatic (ampullarid) snails, but will also take a wide variety of other invertebrates and small vertebrates (e.g. fish, amphibians). Larger animals are able to take larger prey and their jaws are well-suited to crushing turtle shells.

The incidence of fluke parasites in cattle has increased in areas where the Broad-Snouted Caimans used to be common. It has been suggested that the decline of the caiman has resulted in increased number of snails – an intermediate host for the parasites.

Captive breeding in zoos have shown that this species builds a mound nest into which 20 to 60 eggs are usually laid. In the wild, nests will often be built on isolated river islands.

Nest construction occurs during the rainy season (although it is slightly earlier in more northerly latitudes) and may be assisted by the male.

Eggs are reported to be laid in two layers, which may help to create a slight difference in temperature between the two layers and a slightly different sex ratio in the embryos. Incubation period is approximately 70 days.

Females have been observed opening the nest during hatching and assisting the young to the water, where they will be guarded for an indeterminate period by either one or both parents.

The Broad-Snouted Caiman is classed as low risk – least concern. Commercial hunting in the middle of the century has taken its toll on wild populations. Illegal hunting still persists, but is not now considered to be a threat to the species because caimans are harder to find, making hunting less attractive and more costly when traders can obtain better quality legal skins of higher quality.

Although protection for the species has increased, it still faces the major threat of habitat destruction – deforestation pressures (e.g. hydroelectric projects, draining of vast areas for agriculture) are very severe around Brazil and Uraguay where this species exists.

Pollution entering waterways from developing cities is also contributing to habitat degradation. There have been no studies on these important factors which may be affecting caiman populations.