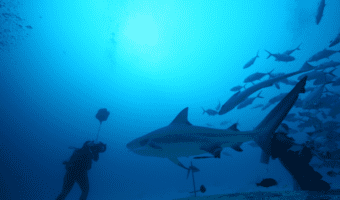 The bull shark (Carcharhinus leucas) is a species of shark found worldwide in warm, shallow waters along coasts and in rivers. This shark lives in both salt and fresh water, less than 100 feet (30 m) deep. They belong to the family Carcharhinidae, the requiem sharks, and the genus Carcharhinus, which also contains 34 other species of shark, including the Galapagos shark.

Bull sharks get their name from the short, blunt shape of their snouts and their aggressive behavior. They are the third most dangerous sharks towards humans, just behind the great white shark and the tiger shark. This species feeds on bony fish and small sharks, including other bull sharks, and stingrays. They are generally a solidarity animal, but may pair with another bull shark briefly for hunting.

The word “Carcharhinus” in the bull shark’s scientific name means sharp-nosed, because most sharks in this family, like the tiger shark, have very pointed noses. However, bull sharks are an exception to this, as they have short, rounded, blunt noses. The word “leucas” is derived from the Greek word “leucos,” which means white, and describes the bull shark’s underside.

Bull sharks are currently listed as Near Threatened on the IUCN Red List. It is thought the reason for the decline in their numbers is due to humans, particularly in shallow costal waters where these sharks reside. This affects the shark’s habitat, and also affects their ability to reproduce. 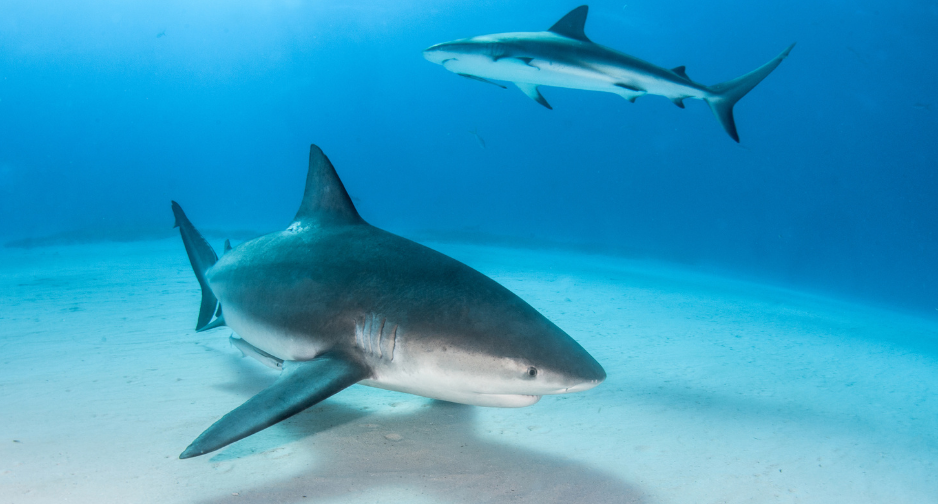 Bull sharks have stout bodies, with a short and blunt snout. They have large dorsal fins on their backs, but they do not have an interdorsal ridge running down their backs as other sharks do. The second dorsal fin is smaller than the first.

These sharks have very sharp teeth, that are triangular in shape and have a serrated edge. They have a bite force up to 5,914 newtons (1,330 lbf).

The average lifespan of the bullshark is around 32 years. The actual lifespan of these animals can depend on the geographic region. In the southern Gulf of Mexico, it was indicated that they can reach an age of 28 years for females and 23 years for males. In the northern Gulf researchers found that female bull sharks live to be 24.2 years old and the oldest male was 21.3 years old.

They are known to live a lot longer in captivity.

Bull sharks are carnivores, with their diet primarily consisting of bony fish, such as catfish. They also commonly eat stingrays and other sharks, even other bull sharks. Other prey they feed on include, dolphins, sea turtles, birds, crustaceans, and echinoderms. Bull sharks cannot survive by eating plants because their bodies cannot digest them.

They are opportunistic feeders, which means that they eat just about anything they find, and they aren’t picky about their food. The bull shark is generally a solitary hunter, but will pair with another bull shark to hunt if needed. They tend to hunt in murky waters, where it is harder for their prey to see them coming, and have been known to use the bump-and-bite technique to attack their prey.

Bull sharks tend to eat in short bursts, but when food is scarce, they can digest their food for a much longer period of time in order to avoid starvation. If attacked by a predator, bull sharks will regurgitate the food in their stomachs in order to escape. This is to distract their predator, as the predator may go after the regurgitated food instead of the bull shark.

Bull sharks are known to be quite aggressive in nature. For this reason, they are rarely popular to keep in aquariums because they tend to kill everything in their environment.

Bull sharks are generally solitary animals, although they will team up with other bull shakers to hunt. A group of sharks is usually called a school, but may also be called a shoal.

They don’t have very good eyesight, but have a great sense of smell that allows them to sniff out their prey. They also have a very good sense of hearing. They are fast animals, and can swim at a speed of 25 miles per hour (40 km/h).

Some bull sharks are seasonally migratory. Bull sharks that inhabit the east coast of the United States will spend summers in northern latitudes and move southward again when waters cool.

Bull sharks are able to regulate themselves to live in either fresh or salt water. They can live in fresh water for their entire life, but this does not happen, mostly due to their reproductive needs. Young bull sharks leave the fresh water in which they are born and move out into the sea to breed. Whilst it is theoretically possible for bull sharks to live purely in fresh water, the primary food source for bull sharks resides in salt water, so they could be at risk of starvation.

Little is known about bull shark reproduction. They mate during late summer and early autumn and are polygynandrous. Males have a tendency to bite during copulation, which is often why females display mating scars.

This species is viviparous and the young are carried in a yolk-sac placenta. The gestation period usually lasts 10 to 11 months, after which the young are born live and free-swimming. The other gives brith to 1 to 13 young, called pups, which are born tail first. At birth, bull sharks weigh between 1.5 and 3.0 kg and are approximately 60 and 71 cm in length.

Bull sharks normally give birth in fresh water or in the brackish water of freshwater river mouths. They do not rear their young, but the young use nursery areas in estuaries for protection. The young have more opportunities to stay safe from predators in fresh water, because the majority of sharks are only able to survive in salt water and so will not prey on the young bull sharks in these areas. They also have greater food supply in these nurseries.

As soon as they are born, the pups begin hunting for themselves, eating small fish and crustaceans and anything else they can catch and swallow. Female sharks mature around the size of 160 to 170 cm, and male bull sharks reach sexual maturity around 160 to 165 cm. Female bull sharks reproduce every other year. 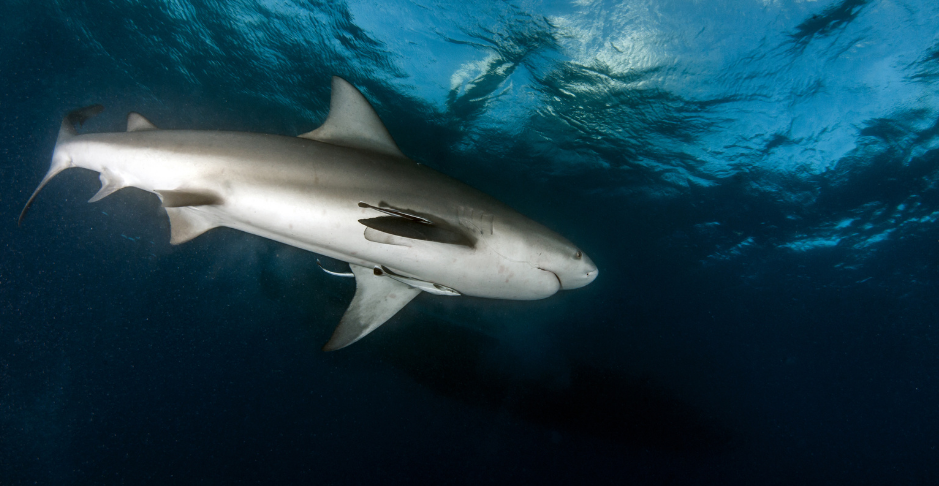 The bull shark is found worldwide, along the coasts of the United States, Mexico, Central and South America, Africa, India, and Australia. The bull shark is diadromous, meaning they can swim between salt and fresh water with ease, and are therefore also found in many estuaries, lakes and rivers of these countries. These estuaries are used as nurseries for the young sharks.

They have been found in the Amazon River in South America, the Mississippi River in the United States, the Brisbane River in Australia, the Tigris River in the Middle East, and the Ganges River in India. Bull sharks are the only shark species that can tolerate prolonged periods in fresh water environments.

Bull sharks reside in tropical and subtropical water, at a depth of around 30 m, but can exist at depths up to 150 m near the coast. They are often found in shallow water where humans are, which is the reason for common bull shark attacks. Some bull sharks migrate each year, particularly female sharks ready to give birth, who move to fresh water areas.

Bull sharks are found almost all over the world, but they are considered Near Threatened by the IUCN. Their exact population is unknown. The numbers of bull sharks appear to be shrinking, and at least one study has found that bull sharks are not growing as large as they used to, which is most likely due to the bigger ones being killed.

The main threat to bull sharks is humans. They are hunted by people for their oil, hide, and meat. They may also be affected by human interference with their habitat, particularly because they reside in such shallow water. In rivers, lakes and estuaries, especially where young bull sharks reside, human interference could be affecting this shark’s population greatly. Human development in coastal waters and shorelines may also threaten bull sharks.

Bull sharks are at the top of the food chain and therefore have very few natural predators. However, they have been known to be preyed on by other, larger sharks and occasionally crocodiles. Injured and smaller bull sharks can be targeted by other bull sharks. The main predator of bull sharks is humans.

Bull sharks and the small remora fish blue streak (Labroides dimidiatus) have a mutual relationship. If the bull shark is infected with parasites it will change its behavior so that the remora will know. The shark will then slow down its swimming speed and swim with its head raised, and the remora will approach and clean all around the shark’s body, gills, and inside the mouth. This allows the remora to eat, but also means the bull shark will get rid of the unwanted parasites.

Bull sharks are also used for economic importance by humans. Despite being very aggressive and eating all of the other fish in the tank, bull sharks are sometimes kept in aquariums and zoos and can adapt to life in a tank. Their aggressive nature often makes them a popular attraction to visitors. Thee animals are also caught for their liver oil, meat, and skin, which can be used for a wide range of cosmetics, leather and food. 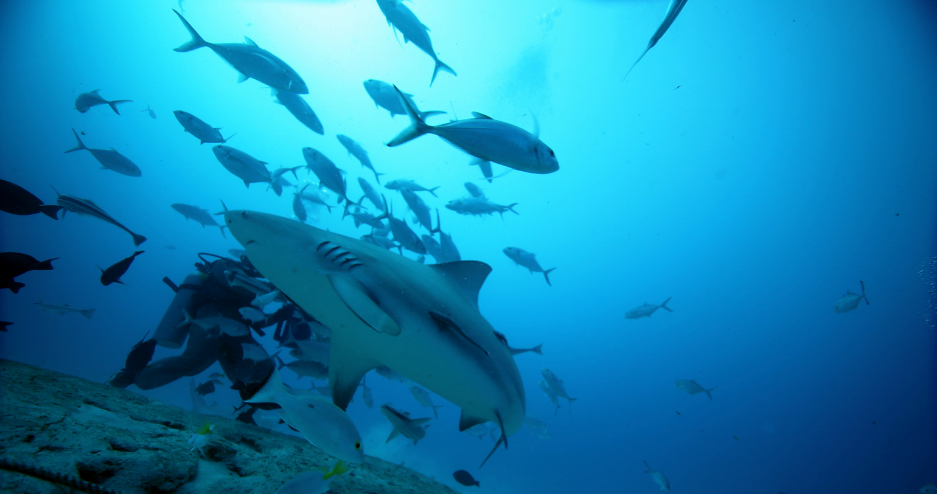 What is the difference between a bull shark and a bullhead shark?

Bullhead sharks and bull sharks do not have many similarities, aside from the fact they are both sharks. Bullhead sharks are a lot smaller than bull sharks, usually measuring about 5 feet (1.5 m), which is less than half the size of a bull shark. Bullheads also have long, thin bodies and prominent “horns” on their heads, which gives them their name.

Both of these animals eat similar foods, but bull sharks are able to eat much larger prey than bullheads. Another difference is that bullhead sharks are not as aggressive as bull sharks, and are not a threat to humans like bull sharks.

Where do bull sharks live?

Bull sharks live in both saltwater and fresh water. This means they live both in the sea and in estuaries, lakes and rivers. They live in shallow areas where humans can be found when swimming, which is why the occurrence of bull shark attacks are much higher than other shark species.

What do bull sharks eat?

Bull sharks are carnivores and mainly eat bony fish, but they also feed on stingrays, dolphins, sea turtles, birds, crustaceans and even other bull sharks!

Bull sharks are extremely dangerous to humans because they are pretty aggressive. Along with the great white shark and tiger shark, they are among the three most likely to attack humans. In recent records, 33 people have been killed by bull sharks.

The reason for the more common nature of bull shark attacks than other sharks are because humans use the same bodies of water that these sharks reside in. Because they live in shallow coastal waters and lakes and rivers, they are much more likely to come across humans than other shark species.

These animals also do not have very good eyesight and hunt by smell. Therefore, they may attack humans because they think they are another prey! They are also territorial and will respond quickly to intruders.