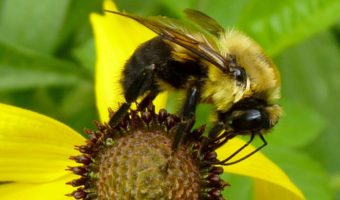 Bumblebees are large, hairy bees and are close relatives of the well-known honeybee. Most species of bumblebee live in colonies, but their colonies are much smaller than the honey bees or wasps who can have up to several thousand individuals, the bumblebee colony will only consist of around 50 – 150 individuals. (You might hear the bee on the left buzzing)!

We can recognise Bumble Bees from their very loud buzzing. They can be seen bobbing around flowers and are a good indication that spring is here.

Bumblebees are usually a very distinctive black and yellow color, although they can be red and black or orange and black. Another obvious (but not unique) characteristic is the soft nature of the long, branched setae, called pile, that covers their entire body, making them appear and feel fuzzy. The female worker bumblebee has a stinger and is capable of stinging although they are never too willing to sting. A male bumblebee has no stinger and therefore cannot sting.

A bumblebee does not have ears, and it is not known whether or how a bumblebee can hear sound waves passing through the air, however they can feel the vibrations of sounds through wood and other materials. The heart, like that in most other insects, runs down the entire length of the body. Their fat body is a nutritional store. Before hibernation, queens eat as much as they can to enlarge their fat body. The fat in the cells is used up during hibernation.

You can take a bumblebee in your hand and as long as you do not treat it roughly, it will not sting you at all. However, if you see a bumblebee lying on its back, then it is best not to touch it. This position is a defensive position and they will feel threatened and prepare to sting.

Unlike the honeybee, the worker bumblebee does not leave its sting in your skin when it has stung you, this means it is capable of stinging you more than once. The poison they inject with a sting is harmless, but can be harmful to those allergic to wasp stings.

Just like mammals, bumblebees control their own body temperature. They can detach the muscles which they use to move their wings. By moving the detached muscles rapidly they produce their own body heat. This is the reason you can sometimes find a motionless bumblebee on the ground or on a flower. It is not dying or sick, but simply heating up its own body and they are unable to fly because of their wing muscle detachment.

Bumblebees do not store food (honey) to survive the winter. The little food they do store is saved to feed the larvae and the egg-producing queen, or is used to survive cold, windy and rainy days. Like their relatives the honey bees, bumblebees feed on nectar and gather pollen to feed their young.

Just like social wasps, the bumblebee colony will die off at the end of summer. The new queens will then find somewhere to hibernate during the winter, usually underground and emerge to find new nesting ground ready to start a new colony in spring.

Bumblebees are very important pollinators to many plants, flowers and fruit trees. It is very interesting to quietly observe a bumblebee at work. Watch them in your garden – without disturbing them – and see how fascinating they are.

Bumblebees generally visit flowers exhibiting the bee pollination syndrome. They can visit patches of flowers up to 1 – 2 kilometres from their colony. Bumblebees will also tend to visit the same patches of flowers every day, as long as nectar and pollen continue to be available. While foraging, bumblebees can reach ground speeds of up to 54 kilometres per hour.

In a few species of bumble bee, once it has visited a flower, it leaves a scent mark on the flower. This scent mark deters visitation of the flower by other bumblebees until the scent disappears.

However, because bumblebees are much more opportunistic feeders than honey bees, these shortages may have less profound effects. Nectar is stored essentially in the form it was collected, rather than being processed into honey as is done in honey bees. It is therefore very dilute and watery and is rarely consumed by humans.

In Britain, until relatively recently, 19 species of native true bumblebee were recognised along with six species of cuckoo bumblebees. Of these, three have already become extinct, eight are in serious decline and only six remain widespread. A decline in bumblebee numbers could cause large-scale changes to the countryside, due to inadequate pollination of certain plants. Bumble Bees are an endangered species.