You are here: Home / Animals / The Burrowing Owl 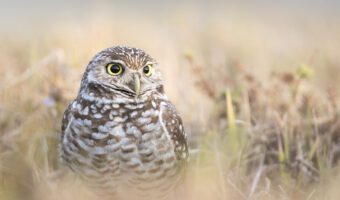 The burrowing owl (Athene cunicularia) is one of the smallest owl species. Also known as the shoco, they are found in both North and South America, primarily in grasslands, deserts, and other open habitats. These owls are long-legged, sandy coloured, and have bright-yellow eyes. Unlike other owls, the burrowing owl is very active during the day and nests in underground burrows.

The burrowing owl population is not considered to be vulnerable or endangered, and they are listed as Least Concern on the IUCN Red List.

Burrowing owls measure between 19 to 25 cm tall and weigh roughly between 127 to 255 grams. They usually have a wingspan of between 53 to 61 cm. Compared to the rest of their body, their tail is short, but their legs are long, which allow them to sprint fast on foot.

These owls have a pale brown body, which is speckled and barred with white, and greyish legs. They have prominent white eyebrows, a white chin area, and no ear tufts. Burrowing owl eyes are a very bright yellow and their beaks are either dark yellow or grey, depending on the subspecies.

Burrowing owls reside in open and treeless spaces, such as deserts, plains and fields of western North America, and drier regions of Central and South America.

Burrowing owls live in abandoned burrows of other animals, such as ground squirrels, badgers, tortoises and coyotes. When no abandoned burrow is available, these owls will dig their own burrow. These burrows are usually 3 to 3.7 meters in length and angled downwards so that the sunlight cannot reach the bottom of the burrow.

Burrowing owls have a varied diet, and eat invertebrates and vertebrates. Most commonly they eat small mammals, such as rodents, insects, such as grasshoppers, crickets and beetles, other birds, such as sparrows, and amphibians and reptiles, such as snakes, lizards and earthworms.

The burrowing owl has an adaptable diet because of seasonal changes. Foods available to them depend on the population of other animals.

These birds are most active at dawn and dusk, but hunt both during the day and during the night. It is more common for them to catch insects during the day, and mammals at night.

Burrowing owls mostly search for prey by waiting on a perch. Once spotted, they will swoop down and catch the prey, or catch insects mid-flight. Occasionally, they will chase their prey on foot.

The burrowing owl is diurnal and most active during the day. The is very unusual for an owl species. However, they do tend to avoid the midday heat and do most of their hunting during dawn and dusk. They have excellent hearing and night vision to aid them during these times.

Burrowing owls are very active, even when they are perching, and are often seen stretching and bobbing about. They do not only perch high up, but also on the ground, and when disturbed will often run on their feet or flatten themselves on the ground instead of flying away.

These owls bathe in puddles or use rain showers as their bath. They also take dust baths; rolling around in the dirt helps them to dislodge any dust mites than might be stuck in their feathers.

The breeding season for the burrowing owl starts in around April, although it can be as early as February. These owls are monogamous, although occasionally a male will have two mates. They nest underground in burrows, hence their name, and the male will line the nest with grasses, roots and dung. The dung helps to ward off predators.

Females lay between 5 to 9 eggs, which are round in shape and white in colour. She lays an egg every one to two days until the clutch is complete. The female incubates the eggs for three to four weeks while the male brings her food.

When the eggs are hatched, both parents feed the owlets. The owlets let out a cry which mimics the sound of a rattlesnake, which helps to keep predators away. Around 40 days after hatching, the young are ready to leave the burrow. The offspring reach sexual maturity at around 10 months of age.

Burrowing owls are preyed on by other birds of prey. These include falcons, hawks, and eagles. They can also be preyed on by foxes, coyotes, badgers, snakes and both feral and domestic cats and dogs.

The burrowing owl has an average lifespan of around 9 years in the wild. They are often killed by vehicles or by their natural predators. Many burrowing owls do not live to adulthood, with two thirds of these birds being killed before reaching a year old. However, in captivity, they can live for over 10 years.

Fascinating Facts About The Burrowing Owl