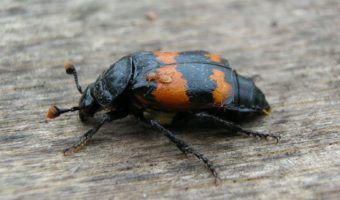 Burying beetles (Silpha vespillo), also known as Sexton beetles, belong to the Silphidae family and make up the genus Nicrophorus. Most of these beetles are shiny black in color and have orange-red markings on their elytra.

Burying beetles are known as the undertakers of the animal world, because they bury the carcasses of small vertebrates such as birds and rodents as a food source for their larvae. As of 2006, there are over 60 extant species of burying beetle, which includes the American burying beetle, the largest of the carrion beetles. They can be found in only four states: Rhode Island, Oklahoma, Kansas, South Dakota, Arkansas, and Nebraska. Other species of this beetle can be found generally in northern Europe.

The numbers of these beetles has been declining in more recent decades. The reason for this population decline is unknown, but it is thought it might be to do with habitat loss. Some species have largest populations than others, and this beetles can be found quite commonly in Europe. However, the American burying beetle is currently listed as Critically Endangered by the IUCN Red List. 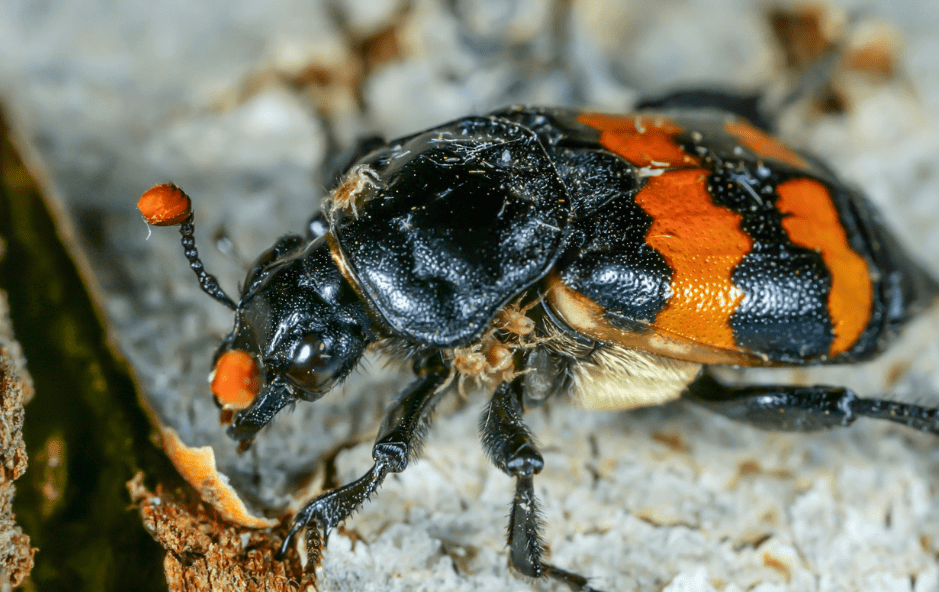 Burying beetles have a length of around 3cm long and have a flattened appearance. They are easily recognized by the brightly colored bands of orangey-red across their backs and bright orange blobs on the end of their antennae.

Burying beetles have large club-like antennae equipped with chemoreceptors (a sensory receptor) capable of detecting a dead animal from afar. These are so strong that they can smell a rotting animal corpse from up to a mile away!

The average burying beetle lifespan is around 12 months.

The burying beetle feed on carrion (dead animals). They are scavengers and use their antenna to detect dead meat. These beetles are not picky with what they will eat and will eat insects, mice, voles, opossums, birds, snakes and fish.

While buying beetles don’t care so much about what they eat, they do care more about the size. If it is a small animal, the adult beetles will eat the food themselves. However, if it is a very large animal, they’ll use it as food for their young.

The burying beetle gets its name because it buries its food. Once these beetles have found a carcass (most likely that of a small bird or a mouse), they fight amongst themselves (males fighting males, females fighting females) until the winning pair (usually the largest) remains. If a lone beetle finds a carcass, it can continue alone and wait for a partner. The carcass must be buried by the beetles to get it out of the way of potential competitors, which are numerous. The burial process can take around 8 hours.

The male and female pair will move the carcass to a nesting chamber, where they prepare it by removing its hair or feathers. They also coat the carcass with preservatives, which are secretions from their mouth and anus.

Burying beetles are nocturnal (active at night). The beetles are strong fliers, moving as far as a kilometer in one night. The nighttime temperature must be above 60° F before they can become parents.

Burying beetles carry a large numbers of tiny mites on their body. These mites help keep the beetles and their carrion meals free of microbes and fly eggs. 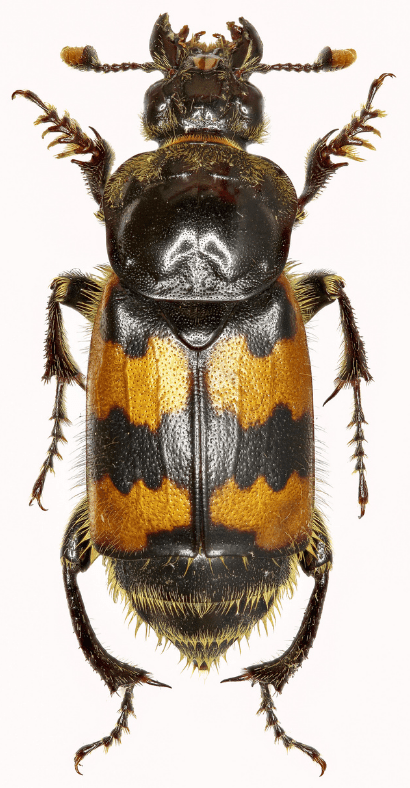 Single males attract mates by releasing a pheromone (a chemical that triggers a natural behavioural response in another member of the same species) from the tip of their abdomens. Pairs usually meet at a carcass to begin mating. Females can raise a brood alone, fertilizing her eggs using sperm stored from previous copulations.

Once the carcass is in a nesting chamber, the female burying beetle lays eggs (around 10 to 30 eggs) in the soil around the crypt (a buried carcass). The larvae hatch after a few days and move into a pit in the carcass which the parents have created. Although the larvae are able to feed themselves, both parents also feed the larvae by digesting the flesh and regurgitating liquid food for the larvae to feed on. This can speed up larval development. Burying beetles are unusual among insects in that both the male and female participate in parental care for their young.

Several pairs of beetles may cooperate to bury large carcasses and then raise their broods communally. The larvae take several days to mature, and during this time the adults will protect them. Males will even stand in for the female and take on her role if she dies.

The final-stage larvae will crawl into the soil to pupate, transforming from small white larvae to fully formed adult beetles. Sexual maturity is reached at 48 to 68 days old, and the life cycle starts again.

Burying beetles can be found in many different areas of the world. Most species are primarily found in Northern Europe, including the United Kingdom, but can also be found in Asia. The American burying beetle is found in North America, but its population is declining. While it was once found in 35 states, as well as the District of Columbia and three Canadian provinces, it is now only found in Rhode Island, Kansas, South Dakota, Oklahoma, Arkansas, and Nebraska.

The exact habitat that burying beetles prefer to reside in is actually unknown, but it is thought they might like forests and grasslands. They can also be found in coastal habitats. 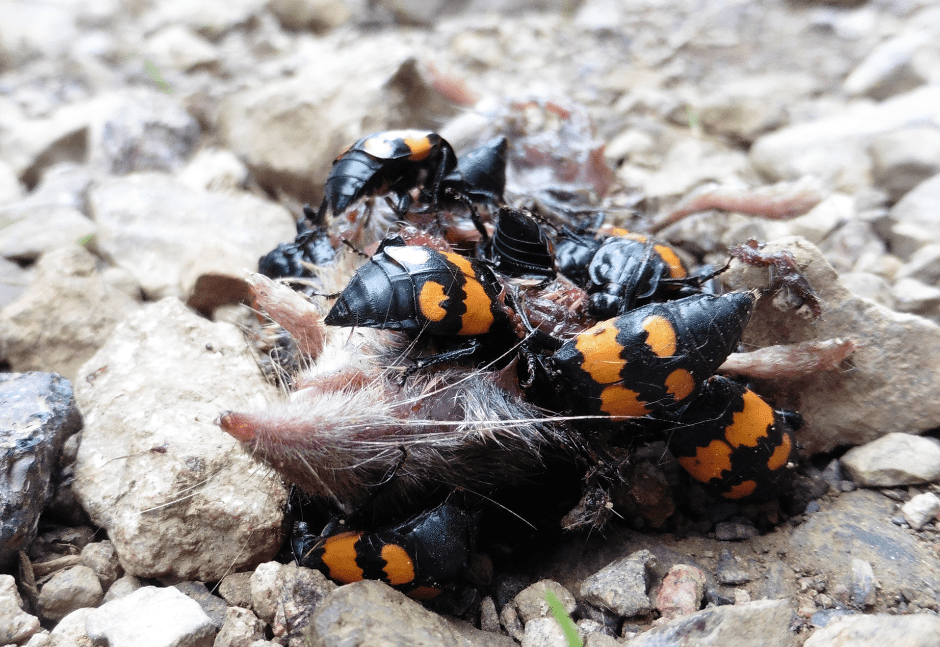 The beetle population decline is happening all over the world, although only some are considered endangered species. The American burying beetle is listed as Critically Endangered on the IUCN Red List.

The reason for the declining numbers of this beetle are unknown, but it is thought that habitat loss plays a big part, probably caused by climate change. The loss of their natural habitat means they also have to compete with larger animals, such as foxes and opossums, for carcasses.

Burying beetles are among the many small critters that decompose the bodies of dead animals and, without them, there would be too many carcasses for us to deal with! This also means they help to restrict the spread of any diseases from the corpses. What’s more, as they recycle the carcasses, they ultimately return valuable nutrients to the soil.