You are here: Home / Animals / Butterflies 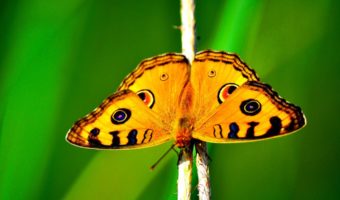 A butterfly is a flying insect of the order ‘Lepidoptera’ (an order of insects with broad wings which have minute overlapping scales). In Greek, ‘Lepidoptera’ means ‘scaled wings’. This order belongs to the superfamily ‘Hesperioidea’ or ‘Skippers’ as they are commonly called. ‘Skippers differ from butterflies in that they have thicker bodies, better eyes, stronger wing muscles and hooked-back antennae.

Butterflies alone are called ‘Papilionoidea’. Butterflies characteristically have slender bodies, antennae with tiny balls on the ends, six legs and four broad, usually colorful wings. Butterflies are distributed throughout the world except in the very cold and arid (dry) regions. There are an estimated 17,500 species of butterflies (Papilionoidea) out of about 180,000 species of Lepidoptera.

Many butterflies have striking colors and patterns on their wings. Butterfly wings are actually transparent – it is the over-lapping scales that give the wings the colors that we see. These scales are pigmented with melanins that give them blacks and browns, but blues, greens, reds and iridescence are usually created not by pigments but the microstructure of the scales.

Most species of butterfly are active during the day so they regularly attract attention. The diverse patterns formed by their brightly colored wings and their erratic yet graceful flight have made butterfly watching a popular hobby.

You can hold a butterfly very gently by its wings without harming it, although some are too fragile to be handled and may be damaged if not handled extremely gently. Some people say that when a butterfly lands on you it means good luck. The popular saying ‘butterflies in the stomach’ is used to describe when a person is nervous or worried.

Butterflies sense the air for scents, wind and nectar using their antennae. The antennae come in various shapes and colors. Vision is well developed in butterflies and most species are sensitive to the ultraviolet spectrum.

Butterflies do not have a mouth to taste and eat food like we do. Instead, they taste through their feet. When they stand on their food, they can taste the food, but how can they eat it without a mouth? Well, instead of a mouth, they have a kind of long, straw-like structure called a ‘proboscis’ which enables them to drink juices and nectar. When this ‘proboscis’ is not being used, it is coiled-up like a garden hose.

As adults, butterflies consume only liquids and these are sucked by means of their proboscis. They feed on nectar from flowers and also sip water from damp patches. This they do for water, for energy from sugars in nectar and for sodium and other minerals which are vital for their reproduction. Several species of butterflies need more sodium than provided by nectar. They are attracted to sodium in salt and they sometimes land on people, attracted by human sweat.

All butterflies have six legs and feet. In some species such as the Monarch Butterfly, the front pair of legs remains tucked up under the body most of the time, and are difficult to see.

The habitats of Butterflies are found in a variety of different climate environments. They can be found in  Tropical areas, forests, marshes, rivers, swamps, meadows, farmlands and gardens, basically. wherever there are plants and flowers.

Butterflies feed on the juice of rotting fruit, nectar and water in which all are sipped through their proboscis tube.

Butterflies sip nectar from flowering plants then carry the pollen from plant to plant which aids plant reproduction. This process is called ‘Pollination’. Butterflies are the second largest pollinators in the world, after Bees!

The average life span for an adult butterfly is just 20 to 40 days.

The minimum life span of a butterfly is as little as 3 or 4 days.

The maximum life span of a butterfly is 6 months.

Butterflies are fragile and almost defenseless creatures. They rely on a variety of strategies to protect them from hungry predators. Their predators include birds, spiders, reptiles, other insects (e.g., wasps, flies and mites), and small mammals.

Most butterflies protect themselves from predators by using camouflage. Some butterflies blend into their environment so well that is it almost impossible to spot them when they are resting on a branch. Some butterflies look like dead leaves (like the Indian leaf butterfly), others look like the bark of a tree and would be difficult to spot! (see photo left)