You are here: Home / Animals / Camels 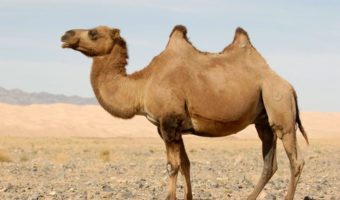 Camels are even-toed ungulates, meaning ‘hoofed animals’. There are several groups of ungulate mammals whose weight is distributed about equally by the third and fourth toes as they move around. Camels are native to the dry desert areas of western Asia and central and east Asia. The name camel comes from the Greek kámēlos from the Hebrew ‘gamal’ or Arabic ‘Jamal’.

Fossil evidence indicates that the ancestors of modern camels evolved in North America during the Palaeogene period (a period of geologic time that lasting 42 million years and is a time when mammals evolved) and later spread to Asia.

There are almost 14 million Dromedary camels alive today that are domesticated animals, mostly living in Somalia, Sudan, Mauritania and nearby countries.

The Bactrian camel once had an enormous range, however, it is now reduced to an estimated 1.4 million animals, mostly domesticated. It is thought that there are about 1000 wild Bactrian camels in the Gobi Desert in China and Mongolia.

Humans first domesticated camels between 3,500 – 3,000 years ago. The Dromedary camel and the Bactrian camel are both still used for milk (which is more nutritious than cows milk), meat and as beasts of burden (an animal that is kept by humans and trained as a working animal), the Dromedary camel in western Asia and the Bactrian camel further to the north and east in central Asia. 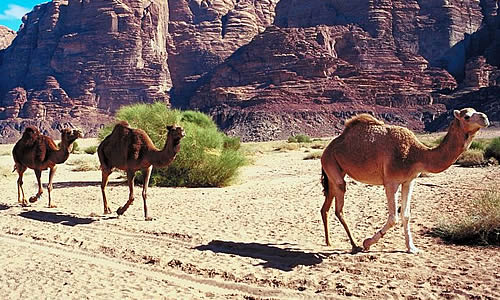 Camels are camelids, members of the biological family Camelidae, the only living family in the suborder Tylopoda. Camels tend to be large and are strictly herbivorous. Camels differ from ruminants in several ways.

Camels have a three-chambered rather than a four-chambered digestive tract. They have an upper lip that is split in two with each part separately mobile, Camels also have an isolated incisor in the upper jaw. The red blood cells in camels are oval shaped, unlike those of other mammals, which are circular. This is to facilitate their flow in a dehydrated state. These cells are also more stable in order to withstand high osmotic variation (the diffusion of water through a cell wall or membrane) without rupturing when drinking large amounts of water.

The term camel is also used more broadly to describe any of the six camel-like creatures in the family Camelidae. The two true camels and the four South American camelids, Llama, Alpaca, Guanaco and Vicuña.

Camels are well known for their humps. A camels hump or humps raise about 30 inches out of its body. Camels do not, however, store water in their humps as commonly believed, though they do serve this purpose through roundabout means. Camels humps are a reservoir of fatty tissue, while water is stored in their blood.

However, when this tissue is metabolised, it is not only a source of energy, but yields through reaction with oxygen. This allows camels to survive without water for about two weeks and without food for up to a month.

The kidneys of a camel are very efficient. Urine comes out as a thick syrup and their faeces are so dry that it can fuel fires.

Camels are able to withstand changes in body temperature and water content that would kill most other animals. Their temperature ranges from 34°C (93°F) at night up to 41°C (106°F) in the day and only above this threshold will they begin to sweat. This allows them to preserve about five litres of water a day. Camels can withstand at least 25% weight loss due to sweating.

A feature of their nostrils is that a large amount of water vapour when they exhale is trapped and returned to their body fluids, thereby reducing the amount of water lost through respiration.

A camels thick coat reflects sunlight. A shaved camel has to sweat 50% more to avoid overheating. It also insulates them from the intense heat that radiates from hot desert sand. Their long legs help by keeping them further from the hot ground. Camels have tough feet so that they can endure the scorching desert sands. Camels have been known to swim if given the chance.

A camels mouth is very sturdy and they are able to chew thorny desert plants. Long eyelashes and ear hairs, together with closeable nostrils, form an effective barrier against sand. Camels pace (moving both legs on one side at the same time) and their widened feet help them move without sinking into the sand.

All member species of the Camelids are known to have a highly unusual immune system, where part of the antibody repertoire is composed of immunoglobulins without light chain. Whether and how this contributes to their resistance to harsh environments is currently unknown.