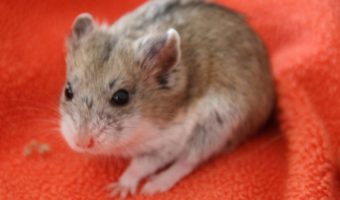 The Campbell’s Dwarf Hamster inhabits the steppes of eastern and central Asia, digging burrows which may extend up to three feet underground. These burrows are commonly lined with scavenged shee’s wool and dry grasses. The burrows maintain an average temperature of 62 degrees Fahrenheit. Natural predators include various owls, foxes, falcons and weasels.

Campbell’s Dwarf Hamsters have an average life span of 18 – 24 months when raised in captivity. They become sexually mature at only 5 weeks and their litters usually contain 4 – 6 pups, which are born after a gestation period of 18 – 21 days. The pair may mate again immediately after birth. Unlike other hamster species, especially the Syrian hamsters, the male plays an active role in the birth and rearing the young.

Male Syrian hamsters may assist the female in pulling pups from the birth canal, cleaning them and ensuring the new mother has enough to eat. He may also guard them while the female is away from the nest.

Like all hamsters, Campbell’s Dwarf Hamsters are rodents and therefore must gnaw regularly to keep the incisors from growing into the skin of the mouth and causing health problems. Some pet owners may provide dog biscuits to assist with this. Wooden chew toys should be used with care as splinters may injure the hamster.

Advice for pet owners of the Campbell’s Hamster:

Campbell’s Dwarf Hamsters have extremely poor eyesight and even worse depth perception. Cataracts are also common in older hamsters. To compensate for this disability, Campbell’s have many scent glands, which are located on the face, behind the ears, on the cheek pouches and near the rectum and genitals.

Many pet owners observe that the hamster may groom itself when in an unfamiliar location. This is done to scent the feet, creating a trail which would enable the hamster to find its way back to the burrow. This behaviour may also be used to revisit a location with plentiful food. These scent trails may persist for up to eight days.

In addition to diabetes, hamsters can develop tumours (both benign and malignant), as well as glaucoma. It is possible to remove benign and malignant tumours with surgery. Unfortunately, there is not much one can do about glaucoma, as the eye will eventually prolapse.

Colours and Markings of the Campbell’s Hamster

Campbell’s Dwarf Hamsters are born with one of two coat types, satin and rex. A hamster with a satin coat appears wet or greasy. In reality the gene only enhances the furs color and gives it lift. The rex coat type is sleek, smooth and glossy and is found in the vast majority of hamsters.

Campbell’s Dwarf Hamsters are available in three basic colors plus many variations thereof. There is also a mottled gene that can result in different markings.

Not all white hamsters with red/pink eyes are albino. Some are so heavily mottled or tinged with platinum that they will appear to be white. Furthermore, when two mottled hamsters are bred, approximately 25% of the litter will be anopthalmic whites, lacking eyes and teeth. This lethal mutation is the product of the interaction between already-mutated genes. These pups generally do not live past two months.

Interbreeding has produced new colors, including blue, blue fawn, lilac fawn and black. Contrary to popular belief, the different colors and markings of hamsters do not indicate personality differences. Personality can be predicted, though, by a close examination of the bloodline and any neurological diseases its ancestors displayed.