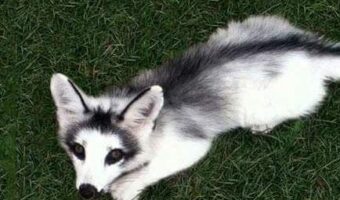 The Canadian Marble Fox is a hybrid breed of fox that came about from selective breeding across species. These foxes are sometimes called the Arctic Marbled Fox, or just the Marbled Fox. As the name suggests, it is ‘native’ to Canada and the parent breeds are found in the northern and western parts of the country. It is a small hybrid from the Red Fox and the Arctic Fox or Silver Fox.

The Fur Commission in the USA suggests that the first litter of marble foxes occurred with a silver fox litter in 1945 in Norway. As most silver foxes live in the Canadian Arctic, this is where the cross breeding of the two species normally occurs.

They were not bred to be a domesticated species as such, they are still very much a wild animal. All be it a very cute one.

The Canadian Marble Fox gets it’s name from the fact that it is bred in Canada. It is only in this sense that it is a ‘native’ species, as it is the product of selective hybridization. The ‘marble’ within it’s name comes from the attractive marbled effect of it’s fur that occurs as a result of a genetic mutation from the cross breeding.

It is a very attractive hybrid, with a thick, glossy fur. It was this attractive fur that spurred on the continued breeding of this hybrid, as pelts were of a better quality and more valuable than the red or silver varieties individually.

Canadian Marbled Foxes are wild animals, they behave in a very similar way to their red or silver fox parents. They are solitary animals, very curious and opportunistic.

Where Does The Canadian Marble Fox Live?

These foxes are not naturally occurring. They are bred artificially and as the arctic/silver fox parent comes mostly from Arctic regions of Northern Canada, it is known as the Canadian marbled fox. There are reports of some of these foxes living now living in the wild but most are bred and kept in captivity. There are many known breeders around the USA and Canada.

Wild individuals have no advantages over their parent breeds, other than perhaps a thicker coat. They are believed to be solitary hunters, though will form packs on occasion.

Some states may allow the keeping of marble foxes. However, foxes are classed as wild or exotic pets and most states in the USA have a comprehensive blanket ban on keeping these animals as pets. In total, it is illegal in 35 states of the USA to own a fox as a pet, legal in only 15. In the states where it may be legal, you might still need a permit or a licence to keep the animal as a pet.

In Arkansas for example, you are able to keep any fox as a pet, but in others you would only get a permit for a fennec fox, not a red fox. As the marbled fox is a hybrid from the red, you would not get a licence. So even in states where you might think it is legal, it is best to check thoroughly.

States Where You Can Keep Any Fox As A Pet:

States Where Permit Is Required:

In many parts of Canada it is illegal to keep a fox as a pet. In British Colombia for example, foxes are protected by the Wildlife Act as they are deemed to be a native wild animal. Other provinces in Canada have similar laws to protect wildlife including:

As you can see, the majority of Canada have laws in place to protect wild species so it is important to do your homework and make sure all laws are followed, and that ownership is permitted in your area.

How To Keep Canadian Marble Foxes

Just because you can, it doesn’t mean you should. And when it comes to Canadian marble foxes, that phrase should be well in mind. They are incredibly adorable looking animals, with fantastic coats and charming features, but they are very much still a wild animal. They were bred initially for the fur trade and not as a domestic pet species.

They behave like wild foxes because they are wild foxes, so they may not interact well with other pets. They may be a threat to any neighboring pets, a high risk for absconding and they are unlikely to be affectionate to any degree.

If it is legal to own one where you live, and you do decide to purchase one, it is going to need a suitable enclosure to live. By suitable enclosure, it will need to be at least 100 square feet, with two to three levels. Bigger if you have more than one.

Bonding is also an important part of keeping a Canadian marbled fox, and this needs to be started early to socialize them and normalize human contact. The more contact they have with their breeder or owner in the first few weeks and months the better. If they are not properly socialized they may be more aggressive, distrustful or hostile.

Like most foxes, Canadian Marble Foxes are omnivorous animals and eat a variety of things, including small rodents such as rats and mice, voles and rabbits, fruits, vegetables, insects and carrion. They will also steal food from other animals, so it is important to keep your pet’s food bowl tightly sealed. In a domestic setting, they will eat any variety of dry or wet dog food, or meat.

What Is The Lifespan Of A Canadian Marble Fox?

The average lifespan of a Canadian Marble Fox is around eight to ten years. However, they can live up to fifteen years or more with proper care. In populations that now live in the wild, they are believed to survive for around 5-6 years.

The gestation period of the Canadian marble fox is around 2 months. They give birth to anywhere between 1 to 13 kits, though the average is 4 to 6 kits. The kits are born blind and may weigh as much as 150 grams (0.33 pounds). They are usually fully weaned by around 10 weeks if feeding from the mother, and should be treated as you would an adult fox after around 6 month.

Predators Of The Canadian Marble Fox

Canadian Marble Foxes do have predators, including coyotes and cougars. However, as the vast majority live in captivity, they are generally safe from these opportunistic hunters. They are also susceptible to diseases carried by other animals, such as rabies and distemper, so it is important to have your pet vaccinated against these.

As a hybrid species not naturally occurring, the Canadian Marble Fox has no official listing as a species of any concern. That doesn’t mean there aren’t any threats however. The biggest threat comes from the fur trade for which these animals were originally seen as an advantageous breed.