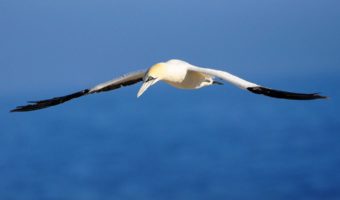 The Cape Gannet total breeding population is around 150,000 birds, with 12% in Namibia, although numbers have declined on the Nambian Islands over the last fifty years, and 88% in South Africa. The largest colony of this large seabird is found on Malgas Island, South Africa.

The non-breeding range of Cape Gannets extends from the coastal waters off the Gulf of Guinea on the west coast of Africa, to Mozambique on the east coast. Cape Gannets seldom occur farther offshore than 100 kilometres, though records of birds more than 200 kilometres offshore exist for both the Atlantic and Indian Oceans.

Cape Gannets have a white plumage with black tails and black wing edges and wing tips. Their crowns and hind necks are yellow in color and they have distinctive black line markings around their eyes and beak. Their bills (beaks) are pointed and are pale blue in color. These snow-white seabirds have fine serrations close to the tip of their bills which help them catch fish and because they enter the water with such force, they have no external nostrils in which water could be forced into.

When diving for fish, these large sea birds can hit the water at speeds of around 40 – 120 kilometres per hour.

At first glance, it would be easy to mistake the Cape Gannet with the Galapagos Masked Booby Bird as they are quite similar in appearance with the black lines around the eyes and beak base not being so defined in the Booby Bird.

The Cape Gannet is strictly a marine bird. Within its normal range Cape Gannets are restricted to the continental shelf, at no more than 100 kilometres from the coast. Occasionally these large seabirds have been recorded on oceanic waters.

Cape Gannets are fish eating birds like most seabirds, that plunge and dive from great heights into the ocean and grab their prey. They favour sardines and other shoaling pelagic fish such as Pilchards. They eat around 300 grams of fish per day.

Cape Gannets are very powerful fliers who glide the air thermals frequently flapping to accelarate their flight. This technique of flap-gliding is a more energy consuming flying technique than the other dynamic souring that is used by other large seabirds, such as the Albatross. Cape Gannets are generally quiet at sea, however, when in colonies they will emit a rasping call ‘arrag arrah’.

Cape Gannets are not strictly migratory birds and the majority will remain within 500 kilometres of their breeding site year round, with the possibility of some adult male Gannets continuing to use the breeding grounds as roosting sites throughout the non-breeding season.

Cape Gannets breed on only 6 islands off the coast of Nambia and South Africa.

The Cape Gannet breeding season begins around August/September time and can last until the next April. Like most Gannets, males and females stay together over several breeding seasons. They build their nests out of droppings, with a few bones and feathers mixed in and other vegetation. Where matierials are scarce, eggs will be laid on bare ground.

Elaborate mating riturals are preformed at the nest whereby both male and female stretch their necks towards the sky and tap their bills together.

The female Cape Gannet typically lays a single egg around October, which is pale blue in color which quickly becomes coated in brown guano. Both the male and female share incubation of the egg which lasts around 40 – 46 days.

Cape Gannets use their webbed feet in the incubation process whereby the foot webs are wrapped around the egg surrounding it with the heat from the rich blood vessels.

When born, the hatchling is a dark, mottled color, blind, has no feathers and its beak is pale. The hatchling is very small and only weighs around 70 grams. It takes around three weeks for the juvenile to reach a third of the size of an adult Gannet which is quite a rapid growth.

At around eight weeks, the chick will weigh more than the adult Gannet and will remain this way until it becomes a fledgling at the age of 97 days old. The chick is cared for by both parents until this time and then it is able to go out to sea to forage for itself.

The life span of a Cape Gannet is around 17 years.

The Cape Gannet is listed a ‘Vulnerable’ as numbers have declined due to its small breeding range. Over exploitation of its prey by human fisheries, compounded by pollution, is causing a continuous decline in the quality of surrounding waters for foraging. The collaspe of the Nambian Sardine Fishery has been a main decline of the Nambian Gannet populations. Anchovies only temporarily and partially replace sardines in their diet when the latter becomes scarce.

Other threats include predators such as the Great White Pelican who is a significant threat to Gannet chicks.

In South Africa, Lambert’s Bay and Bird Island are nature reserves and Malgas Island is within West Coast National Park. Bird Island now forms part of Addo Elephant National Park. In Namibia, the three breeding islands are administered by the Ministry of Fisheries and Marine Resources. All six islands have been identified as Important Bird Areas. Oiled birds are rehabilitated with success in South Africa, and the species is protected by law.

Learn about more birds from Africa