You are here: Home / Animals / Capercaillie 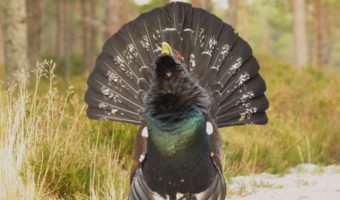 Male and female Capercaillie birds can be individually identified easily by their size and coloration. 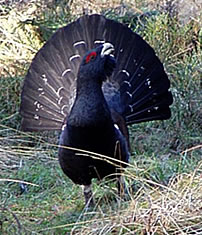 The male Capercaillie (cock) is much bigger, weighing 4.3 kilograms (9.5lbs) on average and ranging up to 6.3 kilograms (14lbs) in larger individuals. The male Capercaillie can range from 74 to 100 centimetres (29 to 40 inches) in length and has a wingspan of about 1.2 metres (3.9 feet). The body feathers are dark grey to dark brown in color, breast feathers are dark green metallic shining. The belly and undertail coverts vary from black to white depending on race.

The female Capercaillie (hen) is much smaller, weighing about half as much as the male. Her body from beak to tail is approximately 54 – 63 centimetres (21 – 25 inches) long, the wingspan is 70 centimetres (28 inches) and she weighs about 2 kilograms (4.4lbs). Feathers on her upper parts are brown with black and silver barring, on the underside they are more light and buffish-yellow.

Both male and female Capercaillie birds have a white spot on the wing bow. They have feathered legs, especially in the cold season for protection against cold. Their toe rows of small, elongated horn tacks provide a snowshoe effect that led to the German family name ‘Rauhfusshühner’, literally translated as ‘raw feet chickens‘. These so called ‘courting tacks’ make a clear track in the snow in winter. Both male and female Capercaillie birds can also be distinguished very easily by the size of their footprints. There is a bright red spot of naked skin above each eye. In German hunters’ language, these are the so-called ‘roses’.

Capercaillie birds are not elegant fliers due to their body weight and short, rounded wings. While taking off they produce a sudden thundering noise that deters predators. Because of their body size and wing span they avoid young and dense forests when flying. While flying Capercaillie birds rest in short gliding phases. Capercaillie feathers produce a whistling sound.

The Capercaillie is a herbivore and lives on a variety of foods including buds, leaves, berries, insects, grasses and in the winter mostly conifer needles. You can see the food remains in their droppings, which are about 1 centimetre in diameter and 5 – 6 centimetres in length. Most of the year the droppings are of solid consistency, but with the ripening of blueberries, these dominate the diet and the faeces become formless and bluish-black.

During winter, when a high snow cover prevents access to ground vegetation, the Capercaillie spends almost day and night on trees, feeding on coniferous needles of spruce, pine and fir as well as on buds from beech and rowan trees.

Many numbers of surviving Capercaillies decline even under massive efforts to breed them in captivity and release them into the wild. The most serious threats to the species are habitat degradation, particularly conversion of diverse native forest into often single-species timber plantations, and to birds colliding with fences erected to keep deer out of young plantations. Increased numbers of small predators (e.g. Red Fox) due to the loss of large predators (e.g. Wolf, Brown Bear) also cause problems in some areas. In some areas, declines are due to excessive hunting, though game laws in many areas have stopped this. It has not been hunted in Scotland and Germany for over 30 years.