You are here: Home / Animals / Capybara 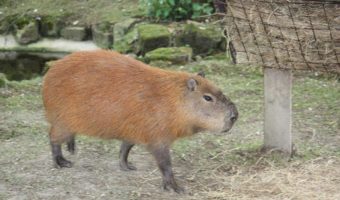 The Capybara (Hydrochoerus hydrochaeris), can be found in various regions of South America and in Panama. The capybara is the largest rodent in the world. It belongs to the genus Hydrochoerus and is closely related to to agouti, chinchillas, coyphillas (a large, herbivorous, semi aquatic rodent) and guinea pigs. It belongs to the family Caviidae and the class Mammalia.

The capybaras lives in savannas, forests, rivers, swamps and marshes — wherever there is sufficient water for them to drink and enough food for them to feed on. They are a very social species and can live in groups of up to 100 individuals.

The capybaras common name means ‘Master of the Grasses’ while its scientific name, ‘hydrochaeris’, is Greek for ‘water hog.

These animals are hunted for their meat and their hide but, fortunately, they are not currently an endangered animal and are listed as Least Concern. The capybara can be found in zoos and parks, and has a lifespan of up to 12 years in captivity. 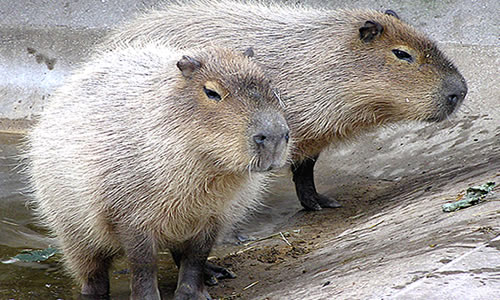 Capybaras are the world’s largest rodent. They grow to 130 centimetres (4.3 feet) and 50 centimetres (1.6 feet) tall, weighing up to 65 kilograms (140 pounds). They have webbed toes which enables them to be excellent swimmers. They can survive completely underwater for up to five minutes, an ability they use to evade predators.

Capybaras have heavy, barrel-shaped bodies and short heads with reddish-brown fur on the upper part of their body that turns yellowish-brown underneath. They lack down hair, and their guard hair differs little from over hair.

Capybaras have slightly webbed feet and no tail. Their back legs are slightly longer than their front legs and their muzzles are blunt with eyes, nostrils and ears on top of their head. They have 20 teeth. Female capybaras are slightly heavier than males.

Like other rodents, the front teeth of capybaras grow continually to compensate for the constant wearing-down from eating grasses. Their cheek teeth also grow continuously. When fully grown, they will have coarse hair that is sparsely spread over their skin, making the capybara prone to sunburn. To prevent this, they may roll in mud to protect their skin from the sun.

The Capybara can live for between 8 and 10 years, but they often do not live over four years old because of predation in the wild. They are a favourite food of anacondas, jaguar, puma, ocelot, eagle and caiman. They may live for 12 years in captivity. 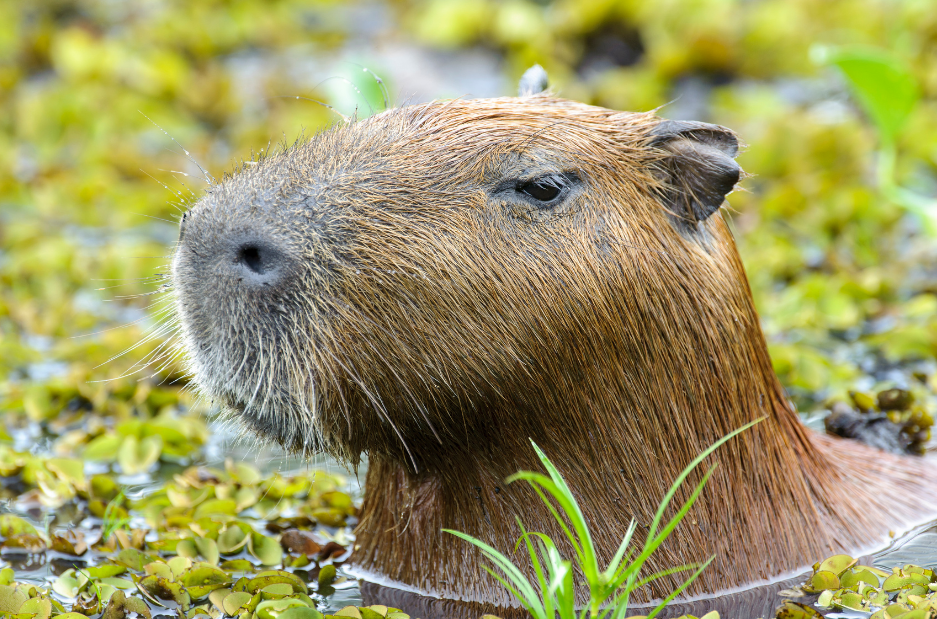 Capybaras are herbivores (more specifically, a graminivore – a herbivorous animal that feeds primarily on plants of the family Poaceae). They graze mainly on grasses, water plants and aquatic plants, as well as fruit and tree bark. They are selective with their feeding and around 75% of their diet involves between three and six different species of plant. However, they eat a greater variety of plants during the dry season, as fewer plants are available. Plants that capybaras eat during the summer lose their nutritional value in the winter, so they are not consumed at that time.

An adult capybara will eat 6 to 8 pounds (2.7 to 3.6 kilograms) of grasses per day. The Capybaras jaw hinge is non-perpendicular and they therefore chew food by grinding back and forth rather than side-to-side, which helps them to chew through tough plant materials.

Capybaras are coprophagous, meaning they eat their own faeces as a source of bacterial gut flora and in order to help digest the cellulose in the grass that forms their normal diet and extract the maximum protein from their food. Additionally, they may regurgitate food to masticate (chew) the food again, similar to how a cow chews the cud. They do not follow the same route while grazing on consecutive days.

Just like the guinea pig, these rodents d not have the capacity to synthesize vitamin C.

Capybaras are semi-aquatic mammals found wild in much of South America (including Panama, Colombia, Venezuela, Brazil, Argentina, French Guyana, Uruguay, Peru and Paraguay) in dense rainforest areas near bodies of water. They live near lakes, rivers, swamps, streams, ponds and marshes, such as flooded savannah and along rivers in tropical forest. They roam in home ranges of 25 to 50 acres.

Capybaras are social animals, usually found in groups of between 10 and 30 (though looser groups of up to 100 can be formed). The groups are controlled by a dominant male who will have a prominent scent gland on his nose used for smearing his scent on the grass in his territory. Capybaras communicate through a combination of scent and sound, being very vocal animals with purrs and alarm barks, whistles and clicks, squeals and grunts.

As well as using scent glands, they can spread their scent further by urinating. Females usually mark without urinating and scent-mark less frequently than males overall. Females mark more often during the wet season when they are in estrus. In addition to objects, males also scent-mark females.

During midday, as temperatures increase, capybaras wallow in water to keep cool and then graze in late afternoons and early evenings. Capybaras sleep very little, usually napping throughout the day and grazing into and through the night.

Capybaras are agile on land, but they are also very at home in the water. They never stray far from water as when one senses danger it gives a short bark that encourages the herd to quickly scuttle into the water to hide. They are so well adapted to going unseen in the water that they are actually able to hold their breath for up to five minutes after diving in. They are also able to sleep in the water, keeping only their noses out. 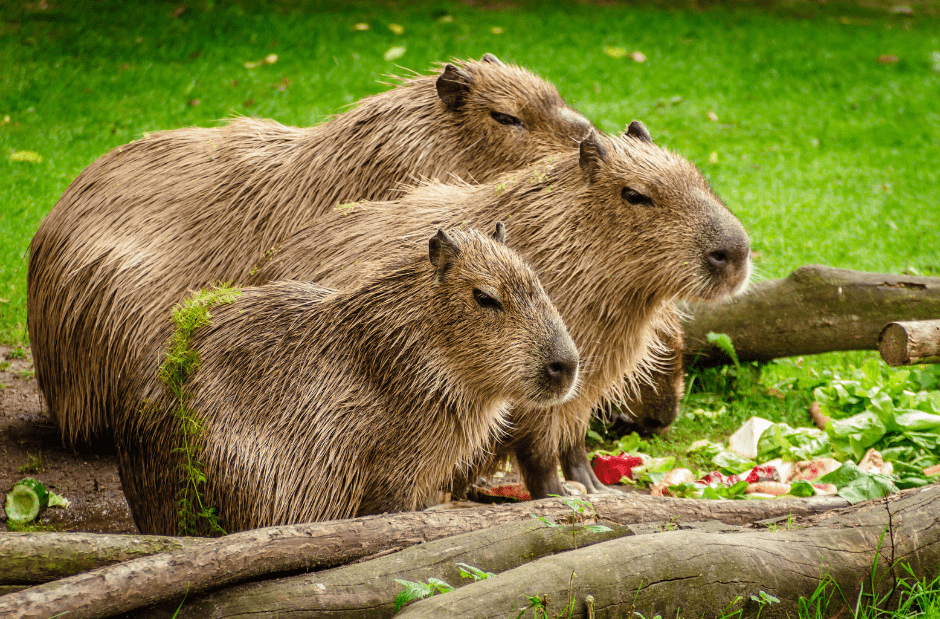 Capybaras reach sexual maturity within 18 months and breed when conditions are right, which can be once per year (in Brazil) or throughout the year (in Venezuela and Colombia). When in estrus, the female’s scent changes subtly and nearby males begin pursuit. A female will also alert males she is in estrus by whistling through her nose.

The male pursues a female and mounts when the female is still in the water. The capybara gestation period is 130 – 150 days and the female usually produces a litter of four capybara babies, but may produce between two and eight in a single litter.

Birth takes place on land and the female will rejoin the group within a few hours of delivering the newborn. Capybara young are very well developed at birth and not only have all their fur and can see, but are also able to run, swim and dive within hours of birth.

The newborns will join the group as soon as they become mobile. Within a week, the young can eat grass, but will continue to suckle from any female in the group, until weaned at about 16 weeks. Youngsters will form a group within the main group. The rainy season of April and May mark the peak breeding season. 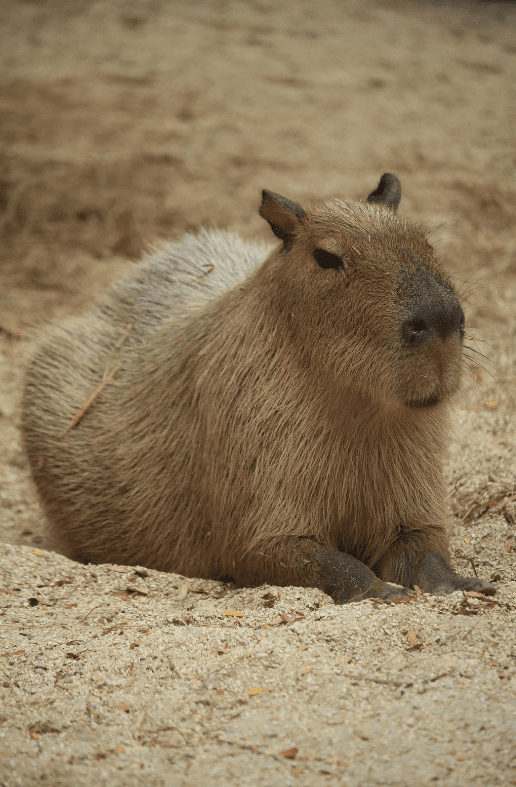 Capybaras are not on the IUCN red list and so are not considered a threatened species. Their population is stable through most of their South American ranges, though in some areas hunting has reduced their numbers.

They are hunted for their meat and pelts in some areas and otherwise killed by humans who see their grazing as competition for livestock.

Their skins are particularly prized for making fine gloves because of its odd characteristic, it stretches in just one direction. In some areas they are farmed, which has the effect of insuring that the wetland habitats are protected. Their survival is aided by their ability to breed rapidly.

Capybaras are residents of many parks and zoos, and can live for up to 12 years in these areas, which is double their lifespan in the wild.

They are gentle and will usually allow humans to pet and hand-feed them. However, this is often discouraged because of their ticks which can be vectors to Rocky Mountain spotted fever.

Although it is illegal in some states, capybaras are occasionally kept as pets in the United States.

The biggest predators of the capybara are the green anaconda, jaguars, pumas, ocelots, eagles, and caimans. They are also hunted by humans for both its meat and hide.

What is a capybara?

A capybara is a giant cavy rodent native to South America. It is the largest living rodent and is a close relative of the guinea pig. They are highly social and can be found in groups as large as 100 individuals. It lives in savannas and dense forests, near bodies of water.

What do capybaras eat?

Capybaras are herbivores and eat mainly grasses and aquatic plants, as well as fruit and tree bark. They are very selective feeders, although will eat a variety of plants during the dry season when there are less plants available. They eat grass during the wet season, but must switch to more abundant reeds and grains, melons, and squashes during the dry season.

A capybara can eat 6 to 8 pounds (2.7 to 3.6 kilograms) of grass per day. They also eat their own feces to get beneficial bacteria to help their stomach break down the thick fiber in their meals.

They regurgitate their food and chew it some more, like ruminants like goats, cows, and giraffes. They chew their food from side to side like a camel, rather than up and down, which helps them to chew the tough plant materials.

Where do capybaras live?

Capybaras are found in Panama, Colombia, Venezuela and Peru, down through Brazil and Paraguay and into northern Argentina and Uruguay. They live in swamps, marshes, rivers and lakes, but can also be found in grassy plains and even in rainforests.

In the dry season they need to live in an area where there is water and they are able to feed, and in the wet season when the area floods they must still be able to graze, which they often do on the grassy banks.

How long does a capybara live?

They can have a lifespan of between 8 and 10 years, but often in the wild they only live to around four years old. This is because they are preyed on, especially by animals such as the green anaconda, jaguars, pumas, ocelots, eagles, and caimans.