You are here: Home / Animals / Caracal

The Caracal (Caracal caracal) is also referred to as the Persian Lynx or African Lynx although it is not part of the Lynx family. It is more related to the Serval and the African Golden Cat. The name of this cat comes from the Turkish word ‘karakulak’ which means ‘black ears’ and black ears are a characteristic feature of the caracal.

Although the caracal is considered a small cat compared to other wild cats, it is among the heaviest and fastest. The caracal is distributed over Northern Africa, the Arabian Peninsula and western Asia. 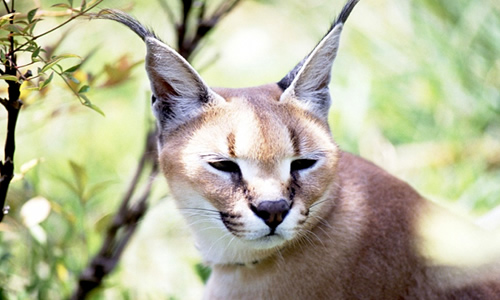 Caracals have a more slender appearance and longer legs than lynxes. A caracals hind legs are noticeable more longer than their front legs. Their ears are elongated and have long black tufts which grow to measure around 1 – 2 inches in length. Their ears are used to locate prey and are controlled by 20 individual muscles.

Caracals have a narrow black line that extends from their eyes to their nose and they have no side whiskers. The colour of their fur ranges from reddish brown, grey to a light sandy colour. Black caracals are also known to occur. Their chin, throat and belly are white. Caracal kittens have reddish spots on their underparts, adults do not have markings. The pupils of caracal eyes contract to circles rather than slits as in other cats.

Caracals are strict carnivores and have very strong jaws. Caracals typically hunt at night during the summer and during the day in colder seasons. They either hunt solitary or paired. The caracal is a fussy eater and is known to disregard internal organs of mammals and partially plucks the fur off hyraxes (fairly small, thickset, herbivorous mammals) and large prey. Caracals avoid eating hair by shearing meat neatly from the skin. However, it will eat the feathers of small birds and is tolerant of rotten meat.

Caracals can survive long periods of time without water, their thirst is satisfied with the body fluids of their prey. Prey is usually in the form of small rodents and hares, however, they are known to attack larger mammals such as gazelles and antelope and will even have a go at small ostriches. Caracals are also well known for their skill of hunting and catching birds in low flight as they can climb and jump extremely well. They have excellent hearing and vision and stalk their prey before capturing it with a quick leap.

Caracals are fiercely territorial and mark their territories with urine. Caracals are very easy to tame and have been used as hunting cats in India and Iran. Caracals are able to hide particularly well and although they are quite abundant in numbers, because of this ability to hide, they are very rarely seen in the wild. vocalizations include miaows, growls, hisses and coughing calls. Their combination of strength, speed and agility makes the caracal a formidable predator.

Caracals mate during the whole year and individuals pair up only to breed. The female caracal has a gestation period of just over 2 months (10 – 11 weeks). The average litter size is 3 kittens. The young are small and vulnerable to predators and are therefore taken care of by their mother for 10 – 11 months after birth. Kittens are quite dull in colour at birth and are able to open their eyes after around 10 days. They are able to eat solid food at about 2 months old. Caracals reach sexual maturity at between 6 – 24 months. The life span of a caracal in the wild is around 12 years and 17 years in captivity.

Caracals are classed as ‘Least Concern’ by the IUCN. Caracals are sometimes kept as pets and can easily adapt to a human environment. However, some farmers view them as pests because of their frequent habits of climbing over fences and eating chickens and other poultry. Caracals are often killed for suspected predation on small livestock. They are also hunted for their fur and meat.

The phrase 'to put the cat among the pigeons' refers to caracals, who were trained as bird hunters at one time in India and Iran.