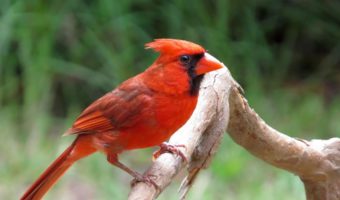 Cardinals belong to the family Cardinalidae and to the order: Passeriformes which is by far the largest order of birds who can be distinguished by their 4 unwebbed toes on each foot, with 3 claws pointing forwards and 1 claw pointing backwards. Cardinals are robust birds which are usually found in temperate forests in North, Central and South America. Cardinal is the name for several crested finches and the Northern Cardinal is probably the most well known. 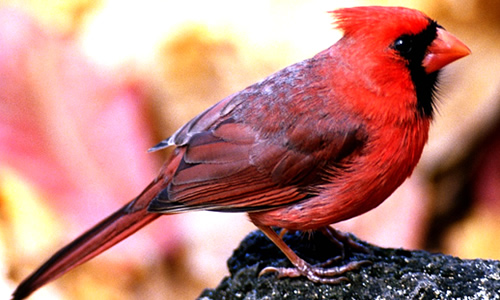 Male and female cardinals differ in coloration. Male cardinals are a brilliant red color with a black ‘mask-like’ face with extends from the eyes to the throat and a thick red beak. Females and their young have a brown- buff coloring with hints of red on their wings, crest and tail. Cardinals are fairly large birds and measure between 12 – 22 centimetres and weigh between 11 and 85 grams depending on species. They have strong beaks for crushing seeds, long tails and prominent crests. Cardinals tend to sit in a hunched over position with their tails pointing towards the ground.

Cardinals prefer habitats in open woodlands, shrubbery, forest edges and build their nests in dense, tangled vines and shrubs. They can also be observed in parks and backyards.

The diet of the cardinal is mainly seeds. They sit in low shrubs and trees and forage for seeds on the ground, usually in pairs.

Cardinals can be recognised by their loud chirping which is produced by both male and female cardinals, unusual for northern songbirds. Cardinals are non-migrating birds who do not molt or change color during the winter. Therefore, they are still a spectacular sight to observe in your snow covered backyards.

Young cardinals are similar in appearance to adult cardinals but are brown in color. Young males with develop their red coloring during growth and young females will remain with their brown coloring. Young cardinals are raised in bulky nests made of twigs and bark and lined with grass.

Most species of cardinals are classed as ‘Least Concern’ by the IUCN, although some are near threatened.