You are here: Home / Animals / Cassowary 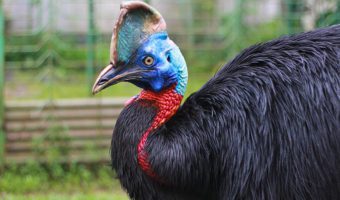 Cassowaries are amongst the most ancient birds on earth. They belong to the Ratite Family like the Emu, Ostrich, Rhea and Kiwi. They are fruit-eating (frugivore) animals that disperse over a hundred species of rainforest trees and vines. Therefore, this “Rainforest gardener” plays an important role in rainforest regeneration and diversity.

There are three cassowary species in the world: the Southern Cassowary in Australia, New Guinea and Ceram; the Single Wattled Cassowary (Cassowary unappendiculatus) in Northern New Guinea; and the Dwarf Cassowary (Casuarius bennetti) in Montane New Guinea. The name cassowary is of Papuan origin. It comes from ‘kasu’ meaning horned and ‘weri’ meaning head, in reference to the casqued or helmeted head.

Elastic and resilient, it acts as both shock absorber and as an indicator of age and dominance. The cassowary lowers its head when running and, in that position, the casque with its backwards-sloping inclination, serves to deflect vines/vegetation away from the head. It starts to develop in young birds 18 -24 months old.

The beak is similar to the casque in that it is also soft. Cassowaries kept in zoos often have damaged casques and beaks due to the birds knocking their heads against fencing.

The naked skin around the cassowary’s neck is bright blue and two red wattles hang from the front of the neck. The blue on the back of the neck becomes bright red at the nape. Females often have brighter neck wattles but the intensity of the colour in all birds change with mood.

The feathers are glossy black, coarse and hair-like with very little down. They have two shafts the same as emus. There are no tail or flight feathers. When compared to the body, the wings are small. The dark feathers and the colourful wattles break up the bird’s outline and help it blend into the forest’s shadows.

A Cassowary’s legs are stout and very powerful and its foot can be up to 180 mm long. The middle one of its three forward-pointing toes can reach 120mm in length. The innermost of these three toes is a long sharp claw up to 80 mm in length.

The cassowary fights by leaping in the air and kicking forward, sometimes with both feet. Fighting cassowaries raise their feathers, bending their necks right under their bodies and, roar loudly. However, they do not usually fight for long and little damage is usually done.

The size of the footprint can be used to approximate the age and size of individual birds, with females generally having the larger footprint; males and chicks have smaller prints.

The cassowary has good vision. Like most other diurnal (day-active) birds, it has good colour perception and is able to distinguish contrasts, as human beings do.

The hearing ability appears to be extremely good, with birds generally becoming aware of an intruder long before it is in sight.

The bird has a variety of calls. When disturbed in the forest it generally emits a soft booming noise. If threatened further this can turn into a throaty hiss asthe bird stands very upright with its plumage raised to increase the appearance of size.

When it is very angry and/or about to attack it puts its head down with the bill pointing to the ground and produces a deep booming noise. At the same time the colourful skin inflates and the body trembles.

For most of the year cassowaries are solitary creatures. Individuals occupy home ranges but their disposition and relationships to each other is complex.

If the dominant female encounters a male out of the mating season she stretches up and stares silently at him whereupon he flees. In the breeding season the female usually tolerates the male’s presence eventually.

Before mating the male moves around the female, his throat trembling and swelling as he makes a low rumbling noise.

Breeding seasons vary but are generally from June to October. There are many theories as to what stimulates breeding. One theory is that the breeding season is influenced by food sources.

Two females may lay in the same nest albeit at separate times. Immediately after the female has laid the eggs directly on the forest floor, she will depart, leaving the male to incubate the eggs, because the sex roles are reversed.

Therefore the male also has to be in prime condition so as to incubate the eggs for approximately 50 days and care for the brood for a minimum of a further 9 months until the chicks are driven out at 7 – 16 months of age. During incubation the male seldom leaves the nest except to drink.

They have a glossy appearance and are light pea-green in colour when freshly laid.

An average clutch is three to five eggs and the female lays these directly onto the forest floor. The male sits on the eggs for an average of 50 days, constantly turning the eggs.

The newly hatched chicks are striped black and cream, with pale brown heads and tiny wattles but no casque. All chicks look very similar and it is very hard to identify individuals. The male is very protective and in times of danger the chicks hide under his tail.

Older chicks maintain their stripes until they are 5 months of age; the stripes then fade and by the first year the chicks are a dull brown. The skin around their necks begins to colour at about six to nine months.

The male adult will abandon his chicks for many reasons, including the approach of a new breeding season, the death of a chick (causing the male to abandon the others); or very lean food times. Chicks will be left to look after themselves between 7 and 16 months of age.

We recognise two groups of sub-adults:

The adult Cassowary grows up to approximately 1.8 m in height, although most are about 1.5 m. Females are heavier, weighing up to 60 kg while the males are about 35kg.

When the casque is fully developed, the feathers are black and the colours are very distinctive on the neck. The wattles are still small until 4 – 6 years of age. Cassowaries become sexually mature at approximately 4 years of age. 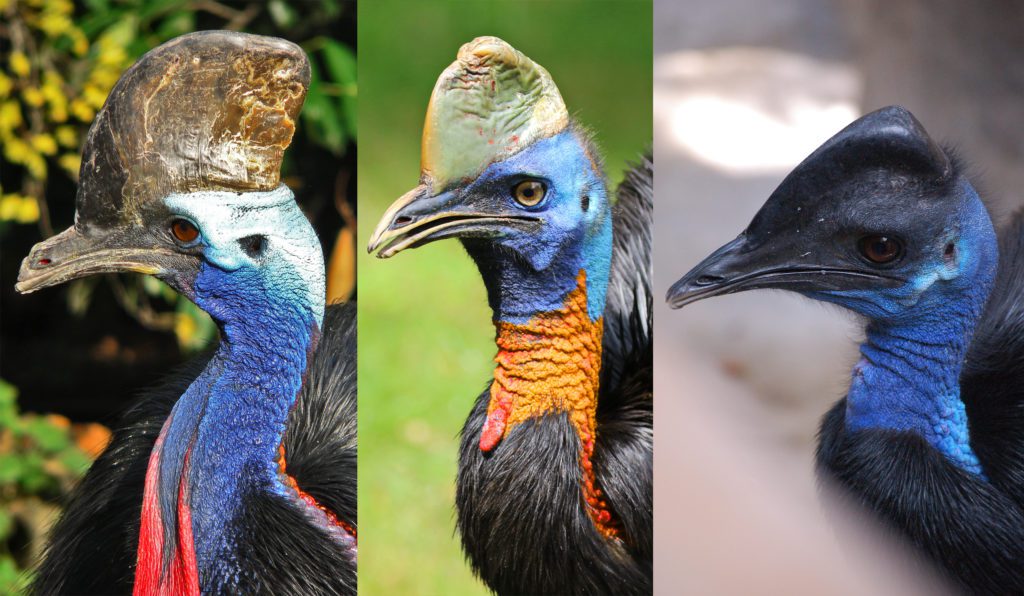 It is difficult to determine the sex of cassowaries, as the plumage of males and females is similar. The female is generally larger than the male with a bigger casque and brighter neck and head colours.

The length of the rump feathers appears to be longer in the male, which could be related to the need to shelter chicks under his body. The most certain way of determining the sex of a cassowary is to see the male with chicks, since the male always raises the young chicks.

It is also very difficult to estimate the age of adult cassowaries. It is assumed that in very old birds the necks look more wrinkled and the footprints are larger. Cassowaries have been know to live up to 40 years in captivity, while there are unconfirmed reports of individuals reaching 60 in the wild.

Cassowaries are primarily frugivorous. Droppings that have been analysed consist of approximately 99% fruit and 1% other items, including snails, worms, cicadas and the occasional eggshell. Sometimes the remains of dead animals, including rats and birds have been found in droppings.

It is presumed these are picked up as carrion. In lean times, however, the bird will eat everything available. Cassowaries are not hunters. They pick up food from the forest floor but also clean fruit from bushes and low trees. The time spent foraging an area depends on the quantity and quality of fruit available.

Studies have shown that the cassowary is not restricted to rainforests per se.

The highest population densities of cassowaries do not appear to be in areas of continuous rainforest, but rather where rainforest patches are interspersed within a complex of vegetation mosaics dominated by sclerophyll open forest and woodland genera such as Eucalyptus, Acacia and Melaleuca.

It is unlikely, however, that populations or even individual birds can be maintained permanently in non-rainforested habitats, given their food requirements. Non-rainforested areas appear to provide crucial habitat at particular times of the year.

It is pertinent to note that the peak rainforest fruiting period is from November to February, whereas the peak fruiting period for many open forest shrubs is from July to October, which coincides with the breeding season of the cassowary (i.e. June to October).

Adult cassowaries can forage up to 6 km daily. Sub-adults are similar to adults in this respect but are more opportunistic feeders. When chicks are first born, they follow the activities of the male. If the father is not foraging due to an egg still left in the nest, it will pick up sticks and the chicks will imitate.

The adult will teach chicks to forage and eat by picking up fruit in its beak and breaking the flesh off. The flesh will drop off and the chick will eat this and not the seed. Chicks eat a lot of insects. As the chicks get older they become familiar with sites where they know water and food are available.

After approximately 7 months they are able to forage independently. The feeding range of birds is variable but can be well defined within a certain overall area. The home range in the Mission Beach area appears to vary between 0.5 kmē and 10 kmē.

The feeding range varies yearly, even monthly, depending on fruiting of vegetation attractive to the bird. However, the foraging area occurs within the bird’s home range. Foraging depends on seasonal availability of food, for example, feeding will occur in a certain area for a particular fruit for that time of the year.

The complex mosaic of native vegetation in Mission Beach may provide the complex habitat requirements needed to support a large population of birds by providing a varied resource base at different times of the year and in lean rainforest fruiting periods.

Cassowaries have a ‘gentle’ digestive system, which passes the seeds, unharmed and often with flesh still attached, into a pile of compost.

The smell from the pile apparently protects the seeds from predators such as white-tailed rats, while keeping the seeds moist. In this way the cassowaries ‘cultivate’ the forest, dispersing only those seeds which are useful to them.

It has been estimated that 70 to 100 species of plant depend almost entirely on the cassowary to disperse their seeds.

This means that the bird plays a key part in the ecology of the rainforests of the Wet Tropics and there is growing concern that as cassowaries disappear the forest will lose many species of plants as well as the other animals which in turn depend on these plants.

Water is important to cassowaries. They do not appear to have to drink every day, but the home range has to contain a water source. The birds obtain moisture from fruit, so quality and abundance of fruit is important. Cassowaries bathe to cool.

For example: after Cyclone Winifred (1986) certain adults were observed sitting under garden sprinklers. Their black plumage absorbs heat, so with the loss of foliage and shade in the wake of the Cyclone the birds were exposed to extreme heat conditions.

Cassowaries are diurnal. They have evening roosting sites, which can be recognised by the presence of feathers and dropping as well as day roosting sites which are covered with bundled pandamus leaves.