You are here: Home / Animals / Cheetah 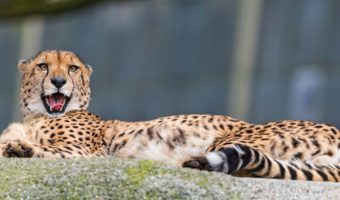 The Cheetah (Acinonyx jubatus) is the fastest terrestrial animal in the world and is a unique member of the cat family ‘felidae’.

The scientific name for a Cheetah is Acinonyx jubatus.

The Cheetah appeared on Earth around 4 million years ago, well before the other big cats. The Cheetah is unique for its speed but lacks the ability to climb like other cats.

Once abundant all over African and Indian savannas and grasslands, this magnificent animal is now rare and only found in Africa and the Middle East.

Below is an example video of what a magnificent hunter the Cheetah is. Its speed and agility makes it one of the most formidable hunters in the cat family.

If you have seen the above video, you will notice that, although the Cheetah is an excellent and focused hunter, it does not always succeed in devouring its catch. A pack of Spotted Hyenas will disturb the Cheetah and take its prey away from it. A pack of Hyenas is just to much for the Cheeath to cope with and the Cheetah will walk away rather than risk being killed by the Hyenas.

The Cheetah has a short, buff/tan colored coat which is covered in black, evenly spaced spots. It has a white underbelly and the spots on its tail merge to form 4 to 5 rings at the end.

Cheetahs are sometimes confused with Leopards but they can be identified by distinctive black stripes on their faces. The black lines down their faces and under their eyes act like anti-glare devices when they are sprinting. 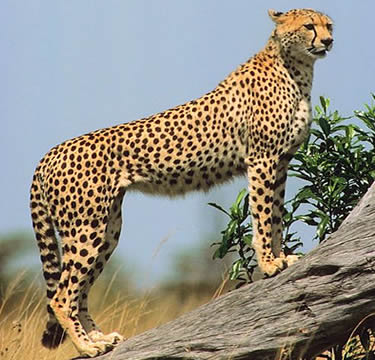 These beautiful, graceful cats have long, lean bodies, long legs and a small head, which makes them perfectly adapted to their rapid, agile hunting behaviour. Their physical features are said to resemble those of a racing dog. Their faces are short and flat and their eyes are positioned forward facing to give them excellent binocular vision. Their eyes also have an image stabilization system which enables them to keep a sharp focus on their prey while running at high speeds.

Cheetahs are specially adapted for hunting with their lightweight skeletons, large muscle mass and non-retractable claws which help them to grip the soil and give them good acceleration and speed in short bursts. Their dew-claws are curved and sharp and used to grasp prey.

Cheetahs have very flexible spines and when they are sprinting, their spines flex and straighten allowing their powerful hind legs to achieve longer, more effective strides making them capable of reaching speeds of 110 kilometres per hour (70 miles per hour). They are able to accelerate from 0 to 64 kilometres per hour (40 miles per hour) in just 3 strides. Their long tails (28 inches) act as rudders and allows the Cheetah to achieve extremely tight turns when pursuing agile prey.

Cheetahs have large nasal passages, large lungs and liver and a powerful heart. Their paws are not as rounded as in other cats and their pads are hard to help them in fast, sharp turns.

A Cheetahs preferred habitat is open savannas and grasslands. They can be easily observed on open plains with short grasses. They use a wide variety of habitats including dense vegetation and even mountainous terrains. Cheetahs do, however, require an environment with tall grasses, bushes and large plants in order to hide from predators. 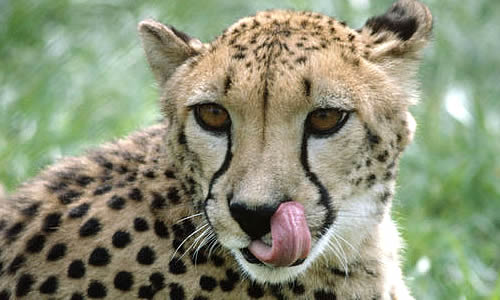 Cheetahs are carnivores and will feed upon antelopes, rabbits, young ostriches and a range of hoofed grassland animals. Because cheetahs rely on sight for hunting, they are diurnal animals mainly hunting their prey early in the morning and late afternoon when temperatures are cooler.

Cheetahs live alone or in small groups. When hunting, a Cheetah will pursue its prey for over 400 metres before giving up and looking for another animal to chase. A Cheetah will get as near to its prey as possible before chasing it as fast as it can go.

Unlike other cats, cheetahs use speed instead of stealth to run down prey and as they have small, weak teeth and jaws they are unable to deliver a death bite, however, on trapping their prey with their claws, they deliver a bite to the preys throat which suffocates them. Because their sprints are so fast, cheetahs become breathless and overheated within 30 seconds. After a sustained effort in chasing and killing their prey a cheetah may rest for around half an hour before they begin to eat.

A cheetah cannot roar like other big cats, however, its vocalizations include purring, chirping, growling and hissing. 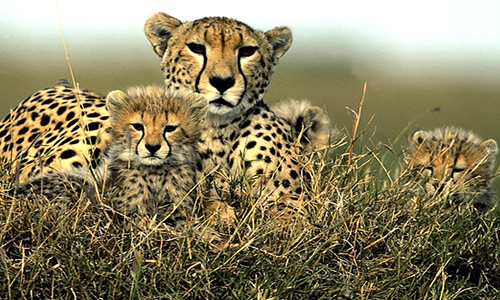 Female cheetahs mature at 3 years and males at 3 – 4 years. The mating period can be between one day or up to a week. The female cheetahs

gestation period is 90 – 95 days after which she will give birth a litter of 4 – 6 cubs in a quiet, hidden location usually in tall grass. Litters are born every 2 – 3 years.

Newborn cubs weigh between 9 and 15 ounces and are blind and completely helpless at birth. They have dark fur and their spots are blended together and are barely visible. At 4 – 10 days old, the cubs will open their eyes and begin to crawl around the nest area. Their teeth start to appear through their gums at around 3 weeks old.

During the first few weeks of the cubs life, a yellow/tan mantle with grow along the cubs back which acts as protection against the rain and sun. The mantle almost completely disappears after 3 months leaving a small mane which remains until they are 2 years of age.

Because the cheetah is not an aggressive cat and is unable to fight off larger predators that may attack their young, only around one in twenty cubs will survive to adulthood as many are usually killed by lions and hyenas. Surviving cubs learn to chase small prey, such as a young gazelle under the watchful eye of their mother. They practice the skills they will need to survive as an independent adult. As their skills develop, they must learn how to handle larger prey in order to survive.

At around 6 months old, the cubs are half the size of an adult cheetah. They remain with their mother for 16 to 18 months, after which the mother will leave the cubs to rebreed. The cubs will remain together for a further few months until the females are ready to breed and the males are chased away by dominant breeding males. Male cubs will stay together forming a coalition to defend territory.

A breeding female cheetah requires a hunting range of up to 800 square kilometres (300 square miles) and apart from some National Parks and isolated populations, suitable territories are mainly restricted to Namibia and parts of South Africa. The life span of a cheetah is 15 – 20 years in the wild.

Sadly, despite numerous captive breeding efforts, the Cheetah is now classed as a Critically Endangered Species by the IUCN. Their decline in numbers is a result of hunting for their beautiful skins and only between 10,000 and 12,000 cheetahs exist in the wild.

The Asian cheetah is on the verge of extinction due to over hunting, prey and habitat loss. Only around 100 remain in small, isolated populations. The African cheetah numbers are declining even in protected wildlife reserves due to increased competition from larger predators such as lions and hyenas.