You are here: Home / Animals / Chimpanzee 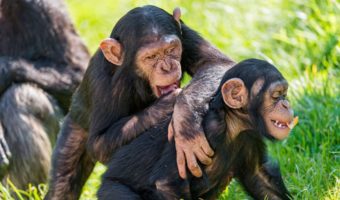 Chimpanzees are intelligent animals and have a complex behaviour and communication system. Several subspecies of the Common Chimpanzee have been recognized: 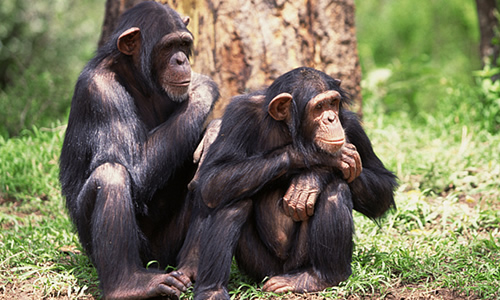 Adult chimpanzees in the wild weigh between 40 and 65 kilograms (88 and 143 pounds). Males can measure up to 160 centimetres (63 inches) and females up to 130 centimetres (51 inches) in height. Although they are lighter than humans, they have a pull five to six times stronger. This is because the muscles of the Common Chimpanzee and other primates are far more effective than those of humans.

The chimpanzees body is covered with coarse dark brown hair, except for the face, fingers, toes, palms of the hands and soles of the feet. Both of its thumbs and its big toes are opposable, allowing a precision grip.

Like humans, chimpanzees are omnivorous, meaning their diet consists of plants and animals. Some of the foods a chimpanzee will eat include seeds, fruits, leaves, bark, insects such as termites and small prey. Chimpanzees will often use a twig as a tool to help them reach termites or ants in nests and have been seen using sticks to hunt other small mammals.

There are also instances of organized hunting. In some cases, such as the killing of Leopard cubs, this primarily seems to be a protective effort, since the Leopard is the main natural predator of the Common Chimpanzee. However, the Common Chimpanzee sometimes bands together and hunts Western Red Colobus Monkeys (Piliocolobus badius) for meat. Isolated cases of cannibalism have also been documented.

Common Chimpanzees are found in the tropical forests and wet savannas of Western and Central Africa at low altitude. The chimpanzee will spend time both in trees and on the ground, but will usually sleep in a tree where it will build a nest for the night. They once inhabited most of this region, but their habitat has been dramatically reduced in recent years.

Common Chimpanzees live in communities that typically range from 20 to more than 150 members, but spend most of their time traveling in small parties of just a few individuals. Common Chimpanzees are both arboreal and terrestrial, spending equal amounts of time in the trees and on the ground.

Common Chimpanzees walk using the soles of their feet and resting on their knuckles, but they can walk upright for short distances. Common Chimpanzees are ‘knuckle walkers’, like gorillas, in contrast to the quadrupedal locomotion (a form of land animal locomotion using four legs) of orangutans and bonobos known as ‘palm walkers’ who use the outside edge of their palms.

When confronted by a predator, chimpanzees will react with loud screams and use any object they can get against the threat. The leopard is the chimpanzees main natural predator, but they have also fallen prey to lions as well.

The female Chimpanzee gestation period will last between 7.5 – 8 months. A chimpanzee will usually give birth to one infant but occasionally will give birth to twins. Infants are weaned when they are about 3 years old, but usually maintain a close relationship with their mother for several more years. Chimpanzees reach puberty at the age of 8 to 10 and their life span in captivity is about 50 years.