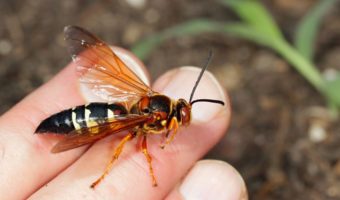 The adults are active in the summer, usually around mid-July. They are frequently seen flying about in the nesting areas.

The queens search for Cicadas to provision their nests (hence the name).

Each chamber in the nest (often as many as 16) is supplied with a paralyzed Cicada wasp and a wasp egg. When the larvae hatches it feeds on the Cicada wasp. Later the larvae pupates and the wasp hibernates in the nest as an immature adult.

Such close inspection appears to many people to be an attack, but the wasps rarely sting, bite, or even land on people. If handled roughly females will sting, males will jab with a sharp spine on the tip of their abdomen, and both sexes are well equipped to bite with their large jaws, however they are non-aggressive towards humans and fly away when swatted at, instead of attacking.