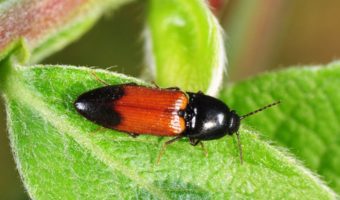 Click beetles belong to the family Elateridae. They are sometimes called ‘elaters’, ‘skipjacks’, ‘snapping beetles’ or ‘spring beetles’. Click beetles are a cosmopolitan family characterized by the unusual clicking mechanism they have. There are a few closely-related families in which a few members have the same mechanism, but all elaterids can click.

A spine on the prosternum can be snapped into a corresponding notch on the mesosternum, producing a violent clicking sound which can bounce the beetle into the air. Clicking is mainly used to avoid predation, although it is also useful when the beetle is on its back and needs to right itself. There are about 7,000 known species.

Click beetles can be large and colorful (some are brilliant metallic green). Most of these beetles are small to medium-sized, dull in color and grow to about 2 centimetres in length. The adults are typically nocturnal (active only at night) and phytophagous (a form of predation in which an organism known as an herbivore, consumes principally autotrophs such as plants, algae and photosynthesizing bacteria).

In hot weather, Click beetles are prone to enter peoples houses at night if entrances such as windows are left opened. The larvae of a few species, called ‘wireworms’, can be serious pests of corn and other grains, especially after a field has been left fallow (a field that has been left to grow naturally without help from nutriants or farming).

Wireworms (Click Beetle larvae) are long, slender and cylinder shaped or sometimes flattened and relatively hard-shelled for larvae. The three pairs of legs on the thorax segments are short and the last abdominal segment is directed downwards to serve as a terminal proleg. They may pass a long life (two or three years) in the soil, feeding on the roots of plants and they often cause much damage to farm crops especially to cereals.